The US Has Nearly Defeated ISIS in Syria, But It May Be Stumbling Into A Bigger War With Russia And Iran

On Feb. 7, the U.S.-led coalition against ISIS unleashed a torrent of airstrikes and artillery fire in a far-flung area … Continued 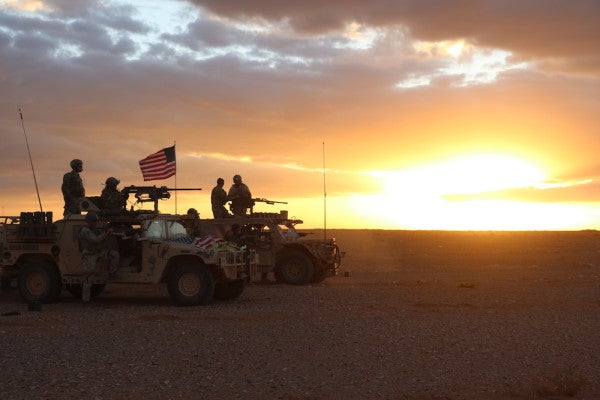 On Feb. 7, the U.S.-led coalition against ISIS unleashed a torrent of airstrikes and artillery fire in a far-flung area of eastern Syria. The barrage was successful, beating back hundreds of fighters attempting to overrun a position held by coalition forces and their local allies. The action might have gone largely unnoticed — the coalition has, after all, carried out nearly 15,000 airstrikes in Syria — but for one thing: These bombs didn’t fall on ISIS, they killed forces loyal to the Syrian government.

The incident, which came amid a Turkish offensive against U.S.-backed Kurdish forces in Syria’s north, is the latest troubling sign that the United States may soon find itself caught up in a conflict volatile enough to engulf an entire region. It also exposes a more disconcerting truth: Defeating ISIS militarily, long the main U.S. goal in Syria, is likely just the easiest part of a more protracted fight. Now that the group’s physical caliphate has effectively fallen, the conflict — and the U.S. role in Syria — is about to become a lot more complicated.

Operation Inherent Resolve, the U.S.-led effort to destroy ISIS, is now nearly three-and-a-half years old. The multibillion-dollar campaign has been an impressive display of military and technological prowess. Coalition planes have rained down more than 100,000 bombs and missiles across Syria and Iraq, airpower that has helped coalition troops and U.S. partner forces take back 98% of the territory ISIS once controlled. Tens of thousands of ISIS fighters have been killed, and the group has been routed from its critical strongholds of Mosul and Raqqa. While ISIS has not been totally defeated, the group is a shadow of the threat it once embodied.

But that overwhelming success has given way to an uncertain path ahead. In choosing to focus singularly on ISIS, the U.S. strategy has played directly into the hands of America’s biggest rivals. Russia, Iran, and Hezbollah have all been happy to sit back and watch coalition warplanes decimate the group’s holdings across eastern Syria. So has the Assad regime, which has vowed to claw back every inch of the battle-scarred country. Now, as the dust settles over the shattered caliphate, pro-Assad forces have already begun probing the area formerly held by ISIS, land now nominally controlled by the coalition and the Syrian Democratic Forces.

On its face, focusing narrowly on ISIS in Syria made sense for U.S. policymakers. At the time Inherent Resolve began, ISIS had already made a name for itself as an ultra-violent group of butchers intent on redrawing borders in the Middle East and sowing havoc across the West. A limited campaign to destroy it was both domestically popular and easy enough to justify under current authorities. It was also perceived to be a way for the United States to accomplish its goals in Syria while avoiding a full-blown war with the Syrian government or its Russian and Iranian backers. That, as recent events show, may no longer be possible.

The Feb. 7 incident comes just weeks after Secretary of State Rex Tillerson announced a fresh set of U.S. goals in Syria. Just one of these objectives concerns defeating ISIS. The rest — which include ensuring a political transition, degrading Iranian influence, creating the conditions for the safe return of refugees and internally displaced Syrians, and making sure Syria is free of weapons of mass destruction — are much more difficult than finding and killing terrorists. Combined, they reveal a far more ambitious plan than the Trump administration previously hinted at. They also put the United States on track for a head-on collision with Russia and Iran.

Both countries have invested heavily in preserving the Assad government, providing years of crucial assistance that has helped loyalist forces beat back a disparate amalgamation of rebel groups. Their financial and military support have backstopped the regime, an international pariah that could very well have fallen without outside support. Now, as Syria’s civil war appears to be tilting steadily in favor of Damascus, Russia and Iran are looking to cash in and advance long-term goals in the country.

Iran has capitalized on the yearslong conflict to anchor its interests in Syria, exploiting the chaos to carve out a near-contiguous land corridor from its frontiers to the Syria-Lebanon border. Shuttling in fighters and materiel, Tehran appears to be settling for the long haul. The fighting, after all, has provided it with a golden opportunity: the chance to bolster its position directly next to Israel, its sworn enemy. The situation is raising both the chance of hostilities and blood-pressure levels in the Israeli Defense Ministry. According to Israeli officials, Iran is entrenching itself with an eye to a future showdown.

Russia, too, has profited heavily from its intervention. Entering the conflict has allowed Moscow to prop up a longstanding ally, show off its battlefield capabilities, and secure key military installations in the country for decades to come. It also afforded Russia the opportunity to profoundly undermine the U.S. position in the Middle East at a time when global confidence in American leadership is steadily waning.

Buoyed by what now appears to be an impending victory for the Assad regime, neither country is likely to forfeit its gains in the face of the new U.S. plan.

All this raises serious concerns about where the United States currently finds itself in Syria, and what direction the road ahead may eventually lead. The Pentagon currently maintains about 2,000 U.S. forces in the country, troops who played a key role in routing ISIS, and who, alongside their local allies, are now charged with ensuring the group doesn’t return. Given that the White House hasn’t announced the possibility of further troop increases, they also appear to be the foundation for the Trump administration’s other far more ambitious goals in Syria. If this is truly the case, then the administration’s plans will almost certainly fail: A couple thousand troops isn’t close to enough leverage and manpower to stamp out ISIS, fight off Iranian influence, root out weapons of mass destruction, and affect a political transition — the numbers simply don’t add up.

Yet the conflict grows more precarious by the day. On Feb. 10, Syrian air defences shot down an Israeli F-16 fighter jet, reportedly the first time an enemy has brought down an Israeli jet in decades. The flare-up — which was followed by a second wave of Israeli airstrikes against Syrian and Iranian targets — marked Israel’s most open foray into Syria’s war to date. It also signaled one more way the conflict could spiral into a larger war, a regional fight that could ensnare the United States.

The incident holds a deeper lesson, one the White House would be wise to keep in mind when moving forward in Syria: The only thing worse than diving headfirst into the world’s most dangerous conflict is stumbling into it unintentionally.