Veterans Are Running For Congress As Democrats. The GOP Is Scrambling To Respond

One Republican ad questioned a combat soldier’s commitment to helping other veterans. Another struck a sinister tone in referencing a … Continued 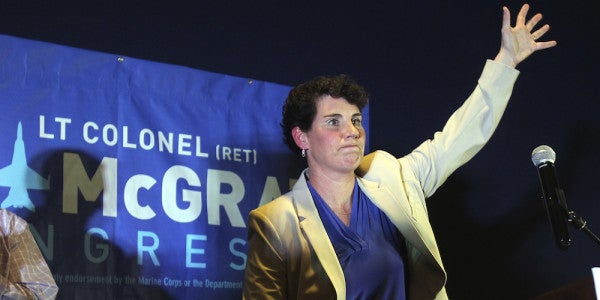 One Republican ad questioned a combat soldier’s commitment to helping other veterans. Another struck a sinister tone in referencing a veteran’s Marine Corps T-shirt. And in yet another congressional district, the GOP candidate implied that ideas don’t matter in the military, prompting backlash from a major veterans-related group.

In the homestretch of a brutal 2018 congressional campaign season, some Republicans — long accustomed to the support of national security-focused voters — are struggling to respond to the unusually large number of military veterans running as Democrats in districts from Kentucky to Maine. They are grasping for ways to talk about those contenders without appearing dismissive of their service — and without opening up more avenues for their opponents to highlight personal stories of heroism, a challenging balance in some of the most high-profile House races in the country.

“It doesn’t appear that Republicans know how to run against our candidates,” charged Democratic Congressional Campaign Committee Chairman Ben Ray Lujan in a recent conversation with reporters.

He was referencing the kind of messaging that appeared in an ad from Congressional Leadership Fund, the House GOP leadership-aligned super PAC, accusing Democratic candidate and combat veteran Jason Crow of truancy on a state veterans’ board and of having “turned his back on Colorado’s veterans.”

Local independent fact-checkers called the message “misleading” and one intoned, “Shame on them.” It all quickly became fodder for a new Crow ad, an opportunity to remind viewers — through the words of the fact-checkers — of his biography. (His opponent, Republican Rep. Mike Coffman, is also a combat veteran.)

“To say he failed to advocate for veterans is simply false,” says the Denver CBS affiliate’s fact-check, which plays in the Crow ad. The correspondent continues, “Crow is not only a combat veteran himself, he was awarded a Bronze Star for heroic service.”

Related: Who Gets to Call Themselves a Combat Veteran? Women Vets as Political Candidates »

Handling an opponent’s military service is a delicate issue that candidates in both parties confront every cycle, and in both Democratic and Republican primaries earlier this year, several veteran candidates said that they had their service minimized or dismissed by opponents in both of their respective parties.

But in the final weeks of the general election, managing that dynamic is especially perilous for Republicans, who are defending a long list of competitive House districts in a tough political environment, making the need for hard-hitting attacks more pressing. This unfolds as Democrats embrace a significant number of veteran candidates in critical battleground districts — and many of them are running heavily biography-driven campaigns.

“Voters range from dislike, distrust or disgust at most institutions in America today, with the exception of the military,” said Jesse Ferguson, a Democratic strategist and former top official at the DCCC. “Running by attacking veterans for their service runs an incredible risk of voter backlash.”

The GOP responses this cycle have in fact been wide-ranging. There were some provocative Crow spots — which CLF maintains don’t directly question his service — and Rep. Bruce Poliquin of Maine ran an ad that said of his Democratic opponent, “Who is the Jared Golden behind this T-shirt? A radical, liberal politician.” The shirt was a U.S. Marine Corps T-shirt. (A spokesman for Poliquin’s campaign didn’t respond to several emails asking to talk for the story.)

But there was also a CLF ad with a much different tone: a two-time Purple Heart veteran drawls, in a spot aimed at voters in Kentucky’s 6th District, “We can respect Amy McGrath’s service but we don’t have to give Pelosi another vote in Washington.” The organization released another ad with a similar approach on Friday, featuring a veteran speaking out against Crow. Others, like Republican Carol Miller, who is running in a West Virginia congressional district against Democratic Army veteran Richard Ojeda, have also tapped veterans to prosecute their case.

Yet touting their own support for veterans doesn’t always inoculate candidates running against opponents with military service backgrounds.

Rep. Andy Barr of Kentucky, who is facing McGrath in a competitive race, has sought to play up his own pro-veteran bona fides, hosting a Veterans for Barr rally in late August that drew more than 300 people. But he has faced blowback for sharper remarks he’s made about her service. Miller was criticized by Democrats for releasing an ad about Ojeda on Sept. 11. And Republicans have received pushback for referencing the personnel file — which was released improperly by the U.S. Postal Service — of former CIA officer Abigail Spanberger, a Democrat running in Virginia.

And now, those Democratic candidates who have sustained varying degrees of jabs at their military or national security ties are fashioning the criticisms into ads that highlight their experience on those very issues, as Crow did — yet another opportunity to play up their biographies.

Republicans argue that the various messaging strategies, even the harder-edged ones, haven’t backfired at all. To the contrary, they say, they’ve forced Democrats to spend time and resources responding, and those issues are fair game anyway, especially in races where candidates are making biography central to their campaigns.

“They’re whining to distract from risky records that would place veterans and families in jeopardy,” said CLF communications director Courtney Alexander, stressing that in the case of the Crow ad, the criticism was of his attendance on a veterans-related board, not of his actual service.

Tucker Martin, a Virginia-based communications consultant with a background in GOP politics, said that the successful campaigns will “separate bio from the issues.”

“A huge mistake would be if anyone every impugned someone’s public service, that’s an unforced error,” he said. “Be respectful of someone’s background, then talk about issues in the race. I think most campaigns can walk that fine line.”

One Democratic operative with extensive experience working on veterans’ issues thinks that critical examination of veterans’ biographies — including service — is legitimate in a campaign. But executing that effectively is risky, said the source, who requested anonymity to speak candidly about a sensitive subject.

“On this particular issue, it’s like, find something else, especially because there are bread-and-butter issues we know really move numbers, why even risk it and do something very, very tone deaf?” the operative said.

In the tight race in Kentucky’s 6th District, McGrath’s opponent, Barr, has been accused of being just that.

Over the summer, he told The New York Times, “We both served our country. I’ve served in a position where ideas matter. My opponent has served her country in the military, where execution matters.”

With Honor, a super PAC that boosts veteran candidates across political parties and is supported by donors such as Amazon founder Jeff Bezos, demanded an apology.

A Barr spokesperson did not respond to requests for comment for this story.

“Some of his comments have been frankly insensitive to veterans,” said With Honor representative Ellen Zeng. The organization, which backs McGrath, is on air with ads in Barr’s district. “He said, ‘We both served, I served in a place of ideas, she served in a place of execution.’ It’s offensive, regardless of whether it’s being said by a Democrat or a Republican.”