Dear Media: A Veteran With PTSD Isn’t More Likely To Be A Mass Shooter

Days after a troubled 28-year-old ex-Marine shot and killed 12 people at a bar in Thousand Oaks, California, President Donald... 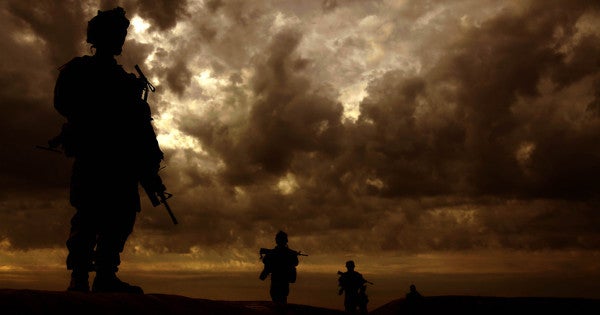 Days after a troubled 28-year-old ex-Marine shot and killed 12 people at a bar in Thousand Oaks, California, President Donald Trump drew an uneasy connection between post-traumatic stress disorder and violence among veterans.

“He saw some pretty bad things, and a lot of people say he had PTSD, and that’s a tough deal,” Trump said told reporters on Friday, describing the perpetrator as a “very sick puppy” with mental health issues. “People come back — that’s why it’s a horrible thing — they come back, they’re never the same.”

But Trump’s comments don’t capture the reality of the relationship between veterans and gun violence. In fact, a veteran is more likely to use a firearm to harm themselves than others — and both tragedies are easily preventable through the right type of intervention.

According to Department of Veterans Affairs data analyzed by the Giffords Law Center to Prevent Gun Violence and published on Veterans Day, 70% of the 6,000 veterans who commit suicide every year use a firearm — far outpacing the number of veterans who use guns for violent crimes from robbery to mass shootings.

The veteran suicide rate, however, has grown by 32% over the last decade and is now nearly double that among civilians.

That, according to some veterans, is what makes Trump’s rhetoric regarding the Thousand Oaks shooting so concerning: it overlooks a problem involving veterans and gun violence that is far more urgent and pervasive than mass shootings.

“When you look at it compared to the average civilian population, their service and their experiences as members of U.S. military are contributing to their suicides,” Cmdr. Mark Kelly, the NASA astronaut and retired Navy aviator who co-founded the Gifford Law Center with his wife, former congressman Gabrielle Giffords. “Six thousand veterans dying from suicide is unacceptable. We as a nation haven’t done a great job addressing this, and in some ways, we’ve made it even worse.”

Indeed, gun suicides in general significantly outnumber the number gun homicides, and according to the Giffords Law Center, veterans make up a full fifth of U.S. gun suicides.

But while military veterans have been involved in a significant number of recent mass shootings, data from the U.S. Bureau of Justice Statistics shows no broader trend in violence among troops struggling to readjust to civilian life.

“Veterans are disproportionately gun owners and suffer from issues like PTSD, there’s no evidence that they’re more likely to commit this kind of violence than other individuals,” Drane told Task & Purpose. “The crimes they are involved in are usually impulsive crimes — domestic violence, fistfights, things that are less deadly, less lethal, and less planned. We don’t see them incarcerated for premeditated crimes at the level we do as .”

While the new data provides yet another alarming dimension to the scourge of veteran suicide, and suggests that no easy solutions are in sight, constant vigilance could help mitigate the problem.

According to the Gifford Law Center, 80% of those contemplating suicide “show concrete signs before a suicide attempt.” And thanks to a growing body of laws like the Extreme Risk Protection Orders (ERPO) (or “red flag” laws), families or law enforcement that see warning signs can petition courts to restrict access to firearms for someone deemed a danger to themselves.

Indeed, GLC researchers estimate that by temporarily removing firearms from the homes of 762 at-risk individuals, Connecticut’s ERPO law “averted up to 100 fatalities from suicide alone,” while in many cases requests for firearm restrictions “resulted in the subject receiving psychiatric treatment they might not otherwise have received.”

However, two major obstacles prevent this process from working as efficiently as it should. First, the federal background check system is woefully flawed, as the country learned after a deeply troubled and disgraced former airman massacred parishioners at a church in Sutherland Springs, Texas, in November 2017. If the VA doesn’t consistently report issues to state and federal institutions those who are potential risks to themselves and others can fall through the cracks.

But there’s also the issue of stigma. After all, ERPO laws only work when members of a family or a broader community are actively engaged with a troubled individual on a regular basis, and common misconceptions around PTSD and mental illness may keep some veterans from seeking help. For advocates like Kelly, comments like Trump’s only make the problem of potential behaviors among returning veterans worse by stigmatizing those suffering from PTSD as “sick puppies.”

“Presidents are supposed to be leaders and they’re supposed to help the country when things like this happen and try to propose some reasonable solutions,” Kelly said. “What he said, especially on Veterans Day, certainly doesn’t make veterans feel good.”