Life In The Pentagon: Waiting To See What President Trump Will Tweet Or Say Next

Your friend and humble narrator is no longer assigned to the Pentagon beat. From now on, this reporter is a … Continued 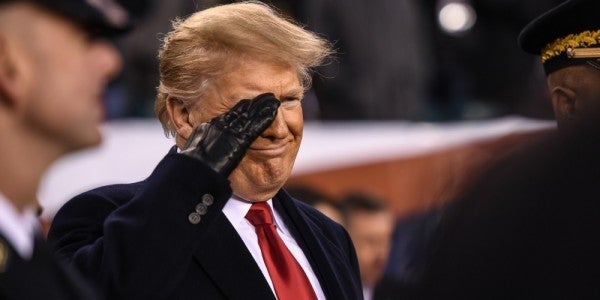 Your friend and humble narrator is no longer assigned to the Pentagon beat. From now on, this reporter is a “Keeping up with President Trump” correspondent because the president makes rapid-fire policy decisions every time he speaks or tweets.

In recent days, Trump has announced he is nominating Army Chief of Staff Gen. Mark Milley to be the next chairman of the Joint Chiefs of Staff – nearly a year before Marine Gen. Joseph Dunford is expect to leave that position. The president also told reporters that his chief of staff retired Marine Gen. John Kelly is leaving the White House and he tweeted that the U.S. military may build a wall along the southwest border if Congress refuses to fund it.

In short, the president is a news-making machine who moves at the speed of cable news and social media. But his strategy of executing policy on social media and in front of cameras has not always worked. During his Dec. 11 televised meeting on border wall funding, Trump spent nearly 20 minutes shouting at senior Democratic leaders without winning any concessions from them.

Initially, the Defense Department had the luxury of waiting for further guidance on the president’s statements about banning transgender service members from staying in the U.S. military, his plans for a massive military parade, and his desire to create Space Force. But this year the Pentagon has been at the mercy of Trump’s impulses, such as when the president abruptly decided in June to cancel war games in South Korea.

Defense Secretary James Mattis has taken great pains to avoid contradicting his boss, but that has become increasingly difficult. In August, Mattis told reporters there were no plans to cancel any further military exercises with U.S. and South Korean troops. The next day, Trump tweeted. “There is no reason at this time to be spending large amounts of money on joint U.S.-South Korea war games.” (The Defense Department subsequently announced that this year’s Vigilant Ace exercise had been called off.)

On border issues, Mattis has tied himself into a human pretzel to avoid appearing in conflict with the president over whether U.S. troops are authorized to use lethal force to protect U.S. Customs and Border Protection personnel. (As Heath Ledger’s Joker in “The Dark Knight” said: “This is what happens when an unstoppable force meets an unmovable object.”)

To your dim-witted correspondent, the president’s penchant for breaking military news seems to be needlessly chaotic; but retired Marine Lt. Col. Dakota Wood, who served as a defense advisor on Trump’s transition team, sees the president’s approach as an effective tactic to own news cycles and to keep his opponents constantly reacting to his moves.

While announcing his policy objectives before any work has been done to implement them runs the risk of encountering problems that have not been worked out yet, Trump’s supporters argue that by being first in the public sphere, the president is able to bypass bureaucratic delays and prevent his adversaries from stopping or watering down his proposals, said Wood, a senior research fellow for defense programs at the conservative Heritage Foundation think tank in Washington, D.C.

“Using Twitter to say the military might be used to build the border wall is likely a negotiating tactic in his back-and-forth with Congress on funding for such,” Wood told Task & Purpose. “All presidents use some sort of leverage. This president prefers using social media. I’d offer that his recent use of live news coverage of the opening debate with Democrat leaders on funding for ‘the wall’ is representative of his preference for such tactics.”

However, it is important to remember that not everything the president announces actually becomes policy, said Anthony Cordesman, of the Center for Strategic and International Studies think tank in Washington, D.C.

While Trump’s tweets and public comments allow him to think out loud, they are not official until the president makes a formal decision, Cordesman told Task & Purpose.

“It’s gotten to the point where it happens so often in so many ways to so many aspects of government – it’s not clear until the president actually takes a decision that this has that much impact anymore,” Cordesman said. “I think that in the case of a good part of Washington, now people wait to see if the president is serious.”