Bill would require Spanish translations on all VA fact sheets

Addressing an audience at a House Veterans Affairs Committee hearing Thursday in Spanish, Committee Chairman Rep. Mark Takano, D-California, pressed for legislation that would require all VA fact sheets to be published in English and Spanish. A bill sponsored by Rep. Gil Cisneros, D-California, would do that.

Takano, whose Riverside area district is 60% Hispanic, said he is concerned that the fact sheets and training modules for the Mission Act, the legislation that introduced new urgent and community care programs for veterans earlier this month, were only printed in English.

This caused a delay in implementation of the act in Puerto Rico, as employees needed to translate and reproduce the materials on their own when a contracted firm's translations proved inadequate.

Takano also noted that another vital service, the Veterans Crisis Line, which provides help to veterans struggling with mental health issues and thoughts of suicide, operates only in English. And while the VA Medical Center in Puerto Rico has established its own local crisis line in Spanish, the line did not answer when Takano tried to call it.

"Think about that for a moment: help is only available at the VA if you understand English," Takano said. 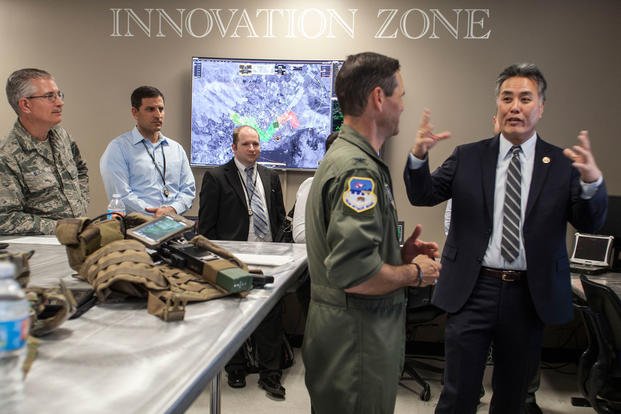 Speaking, reading and writing English fluently is a requirement to serve in the U.S. military. But with the veteran population expected to rise from 7% to 11.2% of the total U.S. population in the next 20 years, Takano said failing to provide veterans with "clear explanations of their benefits in Spanish" meant they would miss out on crucial benefits available to them, such as the GI Bill, VA home loans or health care.

That's roughly translated as, "It's not enough that this is a VA regulation; we must make this the law."

A department official said VA agrees language should not be a barrier to services and it already publishes many forms in both English and Spanish, including enrollment forms and annual benefits guide.

The VA's program includes maintaining a Language Access Working Group responsible for implementing a language access plan across VA facilities. The goal, according to the plan, is for personnel at VA facilities to identify veterans, caregivers and their advocates who have limited English proficiency and ensure they have access to translators, translations and other language services.

"Given the breadth and complexity of the VA [language] program, VA favors this more systematic and flexible approach, as opposed to a statutory mandate for one form of document," Mole said.

He assured Takano that VA would look into the issues of VA Mission Act implementation and the Veterans Crisis Line in Puerto Rico.

According to VA, veterans who feel they have not received appropriate language assistance or were denied help can call the VA's External Complaints Program at (888) 566-3942.

SEE NEXT: After the VA missed a spine-eating infection, a loophole kept him from suing. A new bill would change that for other vets

WATCH ALSO: Once Political Foes, These Vets Groups Are Teaming Up To End The 'Forever Wars'