The Air Force on Friday formally recognized the actions of the B-1B Lancer bomber aircrew that saved both themselves and... 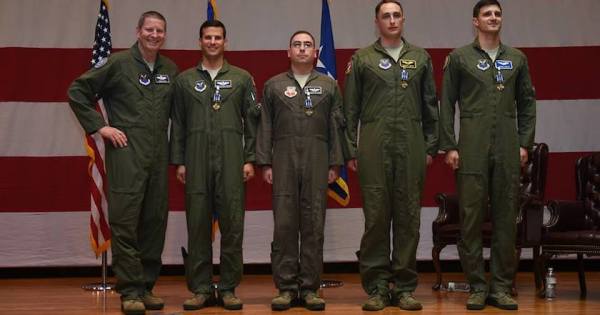 The Air Force on Friday formally recognized the actions of the B-1B Lancer bomber aircrew that saved both themselves and their aircraft amid a fiery emergency landing in May, officials announced on Saturday.

Gen. Robin Rand, the commander of Air Force Global Strike Command, awarded the Distinguished Flying Cross to five airmen from the 28th Bomb Squadron for their “heroism and extraordinary aerial achievement” in landing their aircraft amid both an engine fire and ejection seat failure, a feat that constituted the “first-ever successful landing of a B-1B experiencing such malfunctions,” according to Dyess Air Force Base.

The 28th Bomb Squadron aircrew responsible for the successful landing of a B-1B Lancer bomber following a major engine problem on May 1, 2018