Mattis On His Cleaning Up After Trump With NATO: ‘I Love Reading Fiction’

Secretary of Defense James Mattis called bullsh*t on a report that claimed he'd been dispatched to make nice with skittish... 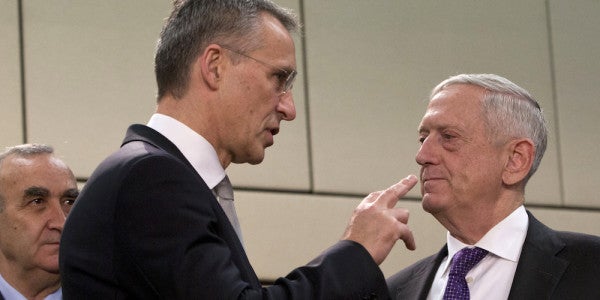 All of these statements came following a whirlwind confab in which Trump insisted that NATO allies by a higher proportion of their GDP than the U.S. does for collective security, stepped all over NATO Secretary-General Jens Stoltenberg, and made his own aides cringe with the bizarre assertion that the Germany government is a tool of the Russian due to a mutually beneficial energy deal — all signs that seem to indicate Trump wants to completely dismantle the historic alliance.

So no, Mattis is definitely not doing “damage control.” Not even a little. Nope.