The Military’s Aviation Crisis Is Definitely ‘Not A Crisis,’ Pentagon Insists 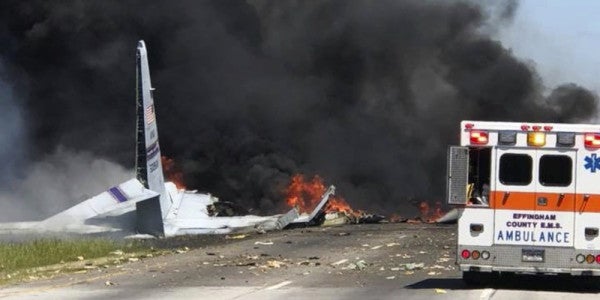 Less than a week after nine Puerto Rico National Guard airmen with the 156th Airlift Wing were killed in the crash of their WC-130 in Savannah, Georgia, the Department of Defense is really sticking to its talking point that no, there is no military aviation crisis, and yes, everything is just fine, thanks!

Flames and smoke rise from an Air National Guard C-130 cargo plane after it crashed near Savannah, Ga., Wednesday, May 2, 2018.Associated Press/James Lavine

White and Spencers' lines mesh nicely with Secretary of Defense James Mattis' March 2017 guidance, which suggests DoD spinmasters “be cautious about publicly telegraphing readiness shortfalls” in the name of operational security: “While it can be tempting during budget season to publicly highlight readiness problems, we have to remember that our adversaries watch the news too.”

Does OPSEC really trump acknowledging and addressing systemic aviation issues? I suspect those 9 airmen who died in that WC-130 crash last week might disagree — if they could.