The Ukrainian Air Force seems to be increasingly entertaining itself with breath-taking aerial acrobatics. Exhibit A came on Friday, when The … Continued 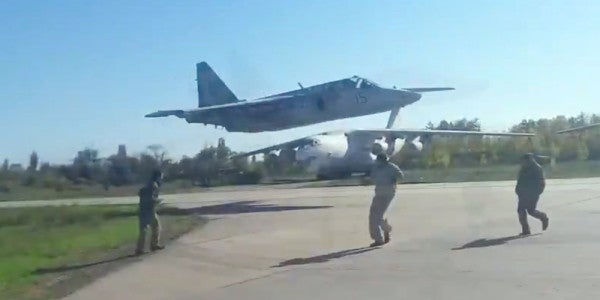 The Ukrainian Air Force seems to be increasingly entertaining itself with breath-taking aerial acrobatics. Exhibit A came on Friday, when The Aviationist flagged an intense clip of an SU-25 Frogfoot buzzing Ukrainian military personnel on the ground.

The footage emerged days after a California Air National Guard was killed on Tuesday when a Ukrainian SU-27B fighter crashed during the Clear Sky military exercises in western Ukraine, and they underscore a dangerous trend among Ukranian aviators: a penchant for danger-close low-level flybys frequently captured in viral videos.

bullet points
How The Other Half Fights
military tech
news
Ukraine