3 Veterans Explain How They Landed Their Dream Jobs With Blizzard

Named one of Fortune magazine’s Best Places to Work, Blizzard inspires great pride in their employees — 96% are proud... 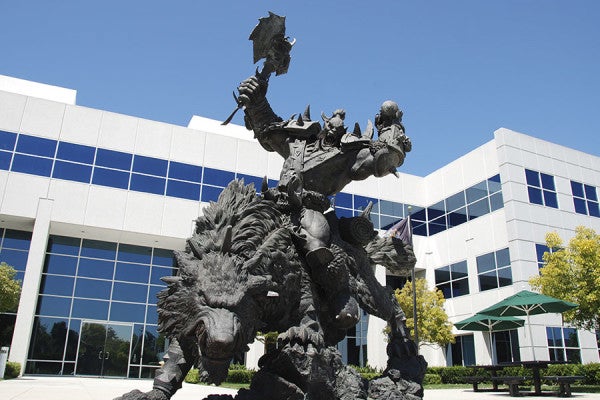 Named one of Fortune magazine’s Best Places to Work, Blizzard inspires great pride in their employees — 96% are proud to say they work at the gaming company behind such hits as the World of Warcraft.

Among those employees who have found happiness at work with Blizzard are a number of veterans, who found that following their passions and putting their military skills to work helped them land jobs with a company that gives them a sense of purpose and fulfillment.

Hirepurpose chatted with three vets to find out what makes Blizzard such a great place to work, and what advice they’d give to others who’d like to follow in their footsteps.

Related: These 3 vets turned their love of video games into careers with Activision »

Make your military experience work for you — and your employer.

U.S. Navy veteran Chris Sigaty, 43, has been with Blizzard for nearly 20 years, working first as a quality assurance tester during a summer off from college and then moving up until becoming an executive producer.

Sigaty spent four years as an active-duty sailor before going to the University of Southern California. It was during the summer between his first and second years at USC that he began his career at Blizzard, in 1996, at the age of 23. At the time, Sigaty said, he didn’t think his time in the Navy would play much of a part in his getting or holding a job in the private sector, but he has since come to appreciate the role that experience played.

“My military experience did not have much to do with my application to Blizzard at that time,” Sigaty said. “However, both of the managers who ended up hiring me told me that they viewed my background and training very positively.”

Part of what his military experience did was give Sigaty the confidence to cold call an artist at Blizzard whom he’d been told about by a friend. It was that artist who put him in touch with the testing department manager, which eventually led to his being hired for the summer — and began his 20-year career with the game company. And Sigaty said that a great deal of his success at the company could be credited to what he learned during his time in the Navy.

“Much of what I have accomplished since joining Blizzard can be attributed to the foundation built by my time in the military,” Sigaty added. “My military experience definitely provided a base of discipline that I did not previously have and helped me learn quickly and apply myself to the testing goals that existed at that time. My desire to be a strong contributor, to fight through adversity, and help my fellow “shipmates” strongly contributed to my success.”

And more than just business success, Sigaty has found personal success at Blizzard, as well. “Although I earn my living working here, I also work with my best friends,” he said. “I love the fact that Blizzard is my life. I am a complete and total geek and grew up playing Dungeons and Dragons, board games, video games, and reading quite a bit. The company is made up of like-minded, passionate folks that all share a love for the games we work on and talk about every day. I’m truly fortunate and still feel an immense amount of appreciation for being able to work at a place like Blizzard.”

Jason Walker, 42, is a veteran of the U.S. Marine Corps as well as a senior IT manager at Blizzard, where he’s been working for six years. But he didn’t start at the top. After serving 11 years in the Marines, including multiple tours to Iraq, Walker went to college and then to graduate school.

He knew a lot about Blizzard from playing video games. While completing his MBA in London, he took an internship at Blizzard, working his way up from the bottom.

“From day one I was welcomed with open arms,” Walker said. “People go out of their way to make the work environment such a good one.”

After graduating, Walker was hired full time. “Coming from the military, I really appreciate being part of a company like this where things move so fast,” he said. “It’s really eye-opening to be able to so quickly affect change. That’s been a breath of fresh air.”

“Especially as a veteran, I love that everyone at Blizzard is so focused and loves what they do,” he continued. “That’s a high bar, and vets should set a high bar for what they want when they get out of the military. But you have to be willing to adapt and be open to the opportunities that come your way.”

Now, Walker oversees the company’s online operations center, where he ensures that online players always have as positive an experience playing the games as he has working on them.

“Everyone on my team is so focused on the players,” he said. “We take it personally if they don’t have a good experience. People live and breathe their jobs here. Sometimes you have to make people go home.”

And even though he now works long hours making sure other players can enjoy their gaming experience, he still makes time to have some fun himself.

“I still play almost daily, and I still get really excited about what we’re doing,” he said.

Start early and keep at it.

Michael Gilmartin, 43, spent 13 years in the Marine Corps Reserves, including two years’ active duty during the Gulf War, before transitioning back into civilian life. Now, he’s the vice president of quality control and localization for Blizzard, but he didn’t always think things would turn out so well.

“When a lot of the base closures started, I heard a lot about how hard it was for guys to compete with civilians for jobs,” Gilmartin said. But when he’d joined the Marines, Gilmartin’s recruiter had drawn up a five-year plan for him — which included getting a college education. “It sent a very big message to me,” he added.

Gilmartin started by studying international business, and he supplemented his formal education with observing how his military leaders worked, learning from them how to lead others. He also learned how to have humility, which helped him when he transitioned out of the military and into the civilian workforce.

“A lot of people believe, I was a sergeant, so I should be a manager, but it’s not that simple,” he explained. “It’s not a bad thing to start at the ground floor and work your way up. And your military skills will help you move up faster.”

He suggests planning as much as you can before transitioning, but also encourages others to hold onto their military experience and learn from it, because companies like Blizzard will share all those same core values that the military teaches.

“Seeking a job is like preparing for a combat mission,” he said. “You have to do your research, and you have to start planning early and update your plan as things change.”

“Blizzard is the Navy SEALs or Harvard of the game industry,” he added. “We work hard and we play hard, and we strive to invest in our people, because working at Blizzard isn’t just a job — it’s a career.”