Editor’s Note: The following is an excerpt from a new book by Marine veteran and Team Rubicon CEO Jake Wood... 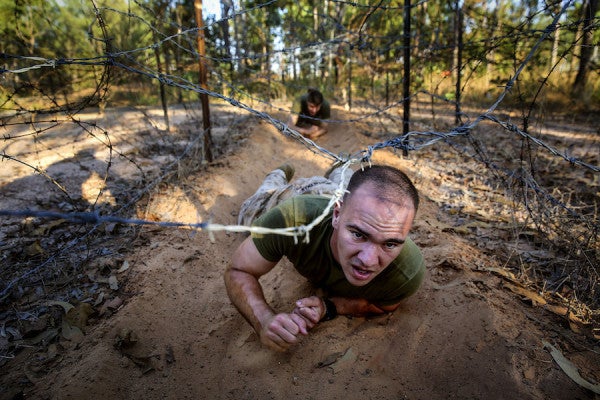 Editor’s Note: The following is an excerpt from a new book by Marine veteran and Team Rubicon CEO Jake Wood called “Take Command: Lessons in Leadership: How to be a First Responder in Business,” which comes out Oct. 14.

Mental toughness (born in part through physical preparation), acuity, and sound judgment are equally critical to leading effectively in today’s high-pressure business environment. In the Marines, dangerous conditions test your ability to focus intently, complicated weapons systems require ever-increasing mental calculations, and vague rules of engagement constantly force you to make high-stakes decisions under stress—all critical skills in today’s world of business. The battlefield is the last place you want to discover that you don’t have what it takes mentally to stay strong when the going gets tough. So how did the instructors prepare our minds in Sniper School? They built mental challenges into every single physical activity. For example, a typical day would begin with physical training, where they might have us bear-crawl backward up a mountain and then sprint back down, only to find a written test at the bottom. Then the real tests of our fortitude would begin.

Sometimes, our chief instructor would give us a memory game, where they would reveal a set of ten random items on display—a pen, watch, and newspaper clipping, for example—for only a period of about fifteen seconds. Then, later in the day, or even week, typically after a particularly strenuous moment, they would announce it was time for the memory test, and everyone would drop what they were doing, pull out a piece of paper, and try to re-create all ten objects. A student would have sixty seconds to write down the name, color, size, condition, shape, and defining characteristic of all ten items—no easy task, especially when you’re exhausted from having just run five miles in the desert.

At the time these seemed to be nothing more than maddeningly impossible games (or the cruel machinations of heartless platoon leaders, as it sometimes felt), but later I realized how much they improved my ability to execute difficult mental tasks in all kinds of situations.

You can create challenges like these for yourself; some of the sharpest people I have met since leaving the Marines practice their own “civilian” versions of these mental exercises. While waiting for a plane to take off they are completing a sudoku puzzle under a self-imposed time constraint rather than reading a gossip magazine, or doing a crossword instead of watching TV, or reading a book (hopefully this one) that expands their horizons rather than playing Angry Birds on their phone. The embodiment of this type of person was my chief scout in the Sniper Platoon, Shawn Beidler. On our deployment to Afghanistan, Shawn brought only a small handful of personal items, yet among them were his college Calculus II and Organic Chemistry books, and a Rubik’s Cube. When asked why, he would respond with something like, “I learned it once; why would I let my brain atrophy?”

The point is that our brain is perhaps the most powerful muscle we have, and if we want to operate at peak performance—whether in the classroom, the boardroom, or the line of fire—we need to keep it constantly active. So create little memory tests or mental challenges for yourself throughout the day. Do sudoku or other puzzles, even silly word games like seeing how many anagrams you can create out of a person’s name. The better shape that mental muscle is in, the better prepared you’ll be to solve the myriad problems and issues that inevitably come at you in rapid fire over the course of a hectic workday.

But keeping your brain strong isn’t the only way to improve your mental preparedness for all the unexpected obstacles you’ll have to navigate, difficult people you’ll have to deal with, and tough decisions you’ll have to make (often with incomplete or incorrect information) in your professional life. At Team Rubicon, when we go on a relief mission we never know quite what to expect when we get there. Will the terrain be navigable? Will the authorities be welcoming? What will the medical priorities be? To be mentally prepared for these unknowns, we employ two very different yet equally important strategies: we amass as much knowledge about the region and the disaster as possible, and we draw on the power of positive thinking. These skills are equally important in business.

Knowledge preparation involves identifying needs and gaps in what is known, and subsequently taking steps to fill them; it is essentially building the mental tool kit needed to solve problems. Positive thinking is the deliberate visualization and mental rehearsal of positive outcomes. Both are critical to being successful in high-stakes situations both in the disaster zone and in the workplace.

Reprinted from the book “Take Command: Lessons in Leadership: How to be a First Responder in Business” by Jake Wood. Copyright 2014 by Jacob Wood. Published by Crown Business, an imprint of the Crown Publishing Group, a division of Random House LLC, a Penguin Random House Company.