Today, Kimberly Bryant's family isn't merely surviving, they're thriving. "I wholly attribute where we are today to Comcast," she says. 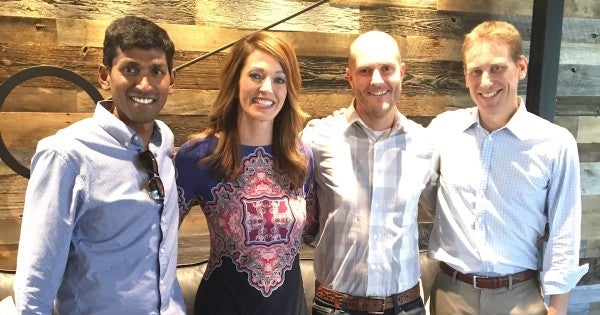 The night of September 11, 2001, Kimberly Bryant drove her boyfriend to the airport to deploy immediately to the Middle East. “That was the last time I saw the man I knew, the man I fell in love with,” she recalls. On that deployment, her boyfriend was severely injured and returned home with a traumatic brain injury and post-traumatic stress disorder. When he was medically retired and deemed unemployable, with 100 percent disability from the Department of Veterans Affairs, various people told her that she had no obligation to him, but she couldn't walk away.

“I knew the person he was before this happened,” she says. They got engaged, married, and raised a family together.

While her husband bore the invisible wounds of war, Bryant persisted as his sole caregiver, managing his medical treatments, and shielding their children from his paranoia, hypervigilance, and depression. As both a military spouse and a Senior Advertising Account Executive at Comcast Spotlight she often spent her lunch breaks rushing home to ensure he hadn't harmed himself, and that their children wouldn't return from school to horrifying scenes. Not only did Bryant care for her husband, but she supported their entire family — emotionally, financially, and psychologically.

“I put on a big facade for my family, both at home and at work,” she recalls. “I had to: Back then, there was no caregiver support, and I was fearful that I'd be judged because his scars and injuries weren't external or physical.” But Bryant knew something wasn't right, and that her family needed a change if they were going to survive. She shared pieces of her story with her manager and expressed a desire to apply for the same job in Comcast's Fort Collins, Colorado, office. Her leadership immediately jumped into action, setting up the interview with their full support. Within two weeks, she had an offer, and moved her family to Colorado.

With the change of scenery and better medical care in Colorado, Kimberly began to see a change in her husband. She began to pursue resources for herself. “I knew I needed to talk to someone, and I knew that Comcast offered an extensive host of resources we could use as employees,” she says. “But I was still concerned about the stigma of seeking help for mental health and the effects it could have on my job.” She did ultimately seek out mental health resources through Comcast, not only for her, but for her entire family.

Today, Bryant's family isn't merely surviving, they're thriving. “I wholly attribute where we are today to Comcast,” she says. Now in the role as a Bulk Community AE at Xfinity Communities, Bryant continues to advocate for caregiver support for military and veteran spouses throughout the company. As she grew more vocal about her family's story and her struggles as the caregiver of a disabled veteran, senior leadership at Comcast personally reached out to Bryant to hear her story. The company has also revamped Comcast's military commitment, not only to service members and veterans, but also to their spouses, families, and support networks.

As today's companies recognize the talent pool that lies within the military and veteran family community, Comcast is paving the way ahead. Its leadership history dates back to its founder, World War II Navy veteran Ralph Roberts. Comcast's commitment is not only to newly transitioned service members, but also veterans in search of jobs, military spouses, and supporters. The company isn't just military-friendly, it's military-ready.

“Comcast is a leader when it comes to acknowledging and hiring not just a veteran or service member, but the spouse, sister, brother too,” says Bryant. “This company allows me to pursue my career goals, while also providing the tools and resources to help my family prosper and thrive, despite military challenges. Spouses serve too,” she adds, “and Comcast recognizes that.”