When you leave the military, resist the temptation to become a lazy piece of shit, or as I like to... 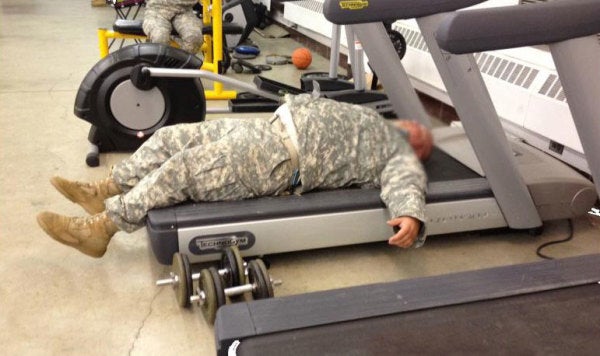 When you leave the military, resist the temptation to become a lazy piece of shit, or as I like to call it, an LPOS.

It's so easy to do, you may not even realize it's happening. The civilian world makes you soft, it infects you with that “anything goes” mindset that dangles an easy life right in front of your face. Don't be fooled. If you're not careful you'll wake up one morning as a LPOS.

And that's when General Mattis pops out of bushes and knifehands you. I've seen it: scary stuff.

No one wants to be an LPOS. It happens gradually, innocently — you'll never see it coming. You stop working out, and gain a few pounds. You stop shaving regularly, or grow out a lumberjack beard. Then you discover a love of season-bombing on Netflix or HBO Go. The momentum builds.

A lot of this is a natural reaction to the systematic retardation that is the United States military. No one should stop you from enjoying your honeymoon period — embrace it. The problem is that you stop doing all the good stuff you learned, too. People value the skills you picked up; don't discard them like a used condom. Employers want to hire folks who are flexible, show initiative, work well in teams, and all that happy horseshit.

Those skills matter. Without them you're nothing. Don't start thinking like an entitled veteran (more on that later). At that point, buddy, you're on track to become a LPOS.

Getting out isn't easy, we all know that. You may have done it once or twice, but I bet I got you beat. I left the Marine Corps three times: active duty in 2005, then the Individual Ready Reserve after an involuntary recall in 2008, and one last time (for Chesty) in the IRR in 2011. It got to the point where I knew the Transition Assistance Program class material better than the instructor, not that it helped much.

I did learn some stuff that's useful, though. Turns out that the transition strategy everyone talks about — the resume you write, the college you go to, the profession you choose — matters a hell of a lot less than the tactics. It's all about the fundamentals. Put one foot in front of the other.

This should makes sense to any noncommissioned officers out there. Get the little things right and a lot of the other stuff takes care of itself. Keep the shit that matters wired tight. You can have dust on the outside of your weapon, but the bolt assembly better be clean.

The military is a structured place. Like all of us, that's probably part of the reason why you hate it. It's the same way you think about a girlfriend right when you're breaking up: All you see is flaws and faults. You just want to be out, to be done.

“After all,” you might say, “Why shouldn't people be able to get up at the crack of noon, take a quick hit or sip a beer, and play video games until dinner? That's what we fought for. That's the American way.”

Problem is, the same military habits that you love to complain about also help out a lot once you're flying solo. Good habits are the equivalent of momentum, they keep you going. Everybody needs some of that, and it's hard to keep up momentum when there aren't consequences for your laziness.

In the civilian world, anything goes. That's a blessing in some sense: There are no inspections, no one yells at you, you can leave when you don't want to stand in a line, the list goes on.

But it can also be a curse. People complain without any good reason, everybody is hella fat, people dress like they just rolled out of bed. Pretty soon you'll realize the sad truth: America is losing its edge.

Why? Lots of civilians are LPOSs, and they drag down the rest of us. The civilian sector craps out LPOSs like they were going out style. Don't become one of them.

A LPOS doesn't have a routine. He just slimes through life. You can be sure to find him on the path of least resistance, whether that's being a C student in community college (or the ever-popular American military universities of the world) or trying to scam a PTSD rating from the VA by researching symptoms online before his claims appointment.

“That will never be me,” you think, or maybe you straight up mutter “Fuck you, bro — I was a Marine/soldier/whatever.” My response to that is I know a lot of vets who are LPOSs, and they hide behind their service when called out.

I'm not saying you’re going to be like that, but that's the flavor of the month for vets. Chances are, you're pretty entitled — I know I am.

You think your service makes you a big deal, like there aren't over two million other people who deployed to Iraq and Afghanistan just like you. You are one of the crowd, so you better start working to stand out.

Time for some ground truth, brothers and sisters. Civilians don't care what you did in the military. Not really, anyway. Saying “Thank you for your service” means precisely dick. They aren't going to give you a job, or do your homework, or take care of your kids. Sack up — life isn't any easier in the civilian world, it's just different. You need to take a lot more responsibility for your actions today, and in the future, precisely because there is so much freedom.

There is also one more thing you should know, but it's a secret.

Are you listening? Good.

YOU DON'T GET PAID TO BE A CIVILIAN.