Leap of faith: How a Navy vet found her place at GlaxoSmithKline

When veterans leave the military, sometimes uncertainty can hamstring success. 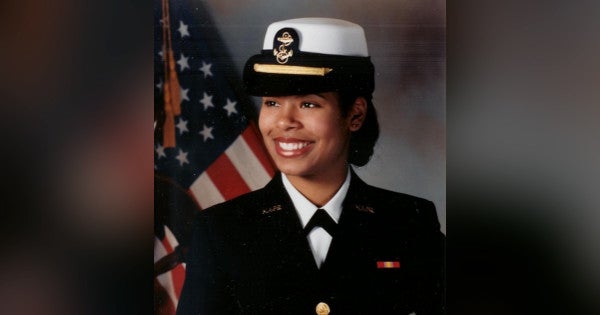 Editor's Note: The following story highlights a veteran atGSK. Committed to including talented members of the military community in its workplace, GlaxoSmithKline is a client of Hirepurpose, a Task & Purpose sister company. Learn more here.

When veterans leave the military, sometimes uncertainty can hamstring success. For Lauren Andretti, fear of the unknown while transitioning to civilian life almost made her extend her active duty service in the Navy. Instead she got organized, mobilized her resources, and took a leap of faith that landed her at GlaxoSmithKline.

Andretti did not grow up in a military town; her family does not have a history of service. But there was something about the military life that drew her in. “I was a free spirit,” she said. “The structure of the military was appealing in helping me get to where I wanted to be in life.” Andretti landed a coveted spot at the Naval Academy in Annapolis, Maryland. “The free education, guarantee of a job after graduation, and possibility of travel drew me in,” she said. But Andretti was not completely sold right away; she was unsure of what she was getting herself into. Her mother made her a deal: Andretti had to stick it out at the Naval Academy until Christmas, and if she was still not sure at that time, her mother would help her transfer to a different school. Luckily, Andretti was fully vested in the Navy life come Christmas and had no intention of leaving the Academy. “I loved my Academy years for the relationships, camaraderie, and the opportunity to push myself,” she said.

Andretti served four years active duty aboard small boys — destroyers and cruisers. She worked as a safety officer, training officer, and weapons officer. She traveled and saw the world. But after four years, it was time for a new chapter. She wanted to move to Washington, D.C., where she knew there were plentiful job opportunities for military veterans. Andretti had attended the Navy TAPS classes for service members transitioning out of the military. She also connected with several agencies that specialized in this transition. Both gave Andretti tools she would need in her job search. A mentor helped translate her military service into recognizable terms and apply that to her resume. “I went to numerous career fairs and hiring conferences,” she said. “After three months, I took all of the job offers I had received and compared them based on my desired location, desired salary, and which company was the best fit for me.”

Andretti initially ended up at a different company, but it did not take long for her to seek out a better fit. “GSK was actually my company's competitor,” she said, laughing. “But after doing my research on GSK, I quickly realized they had a lot to offer their employees.” GSK had better healthcare, superior benefits, a pension similar to the military's, and a company culture that was appealing. In April 2015, Andretti made the switch.

GlaxoSmithKline, a science-led global healthcare company, has proven a solid fit for Andretti. In the Navy, she was in charge of various teams and reveled in the efficiency and coordination of the military. At GSK, she works as a production supervisor leading a team of 25 people. “We manufacture biopharm chemicals and medicines,” she said. “We have staff working 24/7, and it is my job to support the teams, keep the machines working, and maintain schedules.” After her Navy years, managing a team at GSK came naturally. The leadership skills she gained in the Navy continue to serve her in the civilian world.

“Never did I think I would end up working in manufacturing,” she said. “It was not on my radar at all.” But leaving the Navy meant thinking outside the box and stretching herself. “I realized that while the mission had changed, the job was fundamentally the same,” she said. Drawing on the adaptability she honed in the Navy, Andretti made a seamless transition into her new field.

Not only does Andretti love her role, but she loves the company culture even more. “GSK is an extremely open-minded and diverse company,” she said. “My favorite things are the people and the support we get from GSK.” The Employee Resource Groups are a big plus for Andretti. She takes part in the ERG for veteran employees and finds the camaraderie of the group similar to that of the military. “The Military ERG regularly gathers to check in with one another, perform charity work, and take part in social activities like community fun runs,” she said. The Military ERG has proven a great source of support for Andretti.

She is equally enthusiastic about GSK's PULSE Volunteer Partnership Program. This skills-based initiative pairs eligible GSK employees with nonprofit organizations to provide services that support healthcare challenges worldwide. The program was unlike anything Andretti has seen at other employers; upon learning about PULSE, Andretti immediately applied. She recently found out she was selected to take part in a six-month program in Rwanda. During her time away, Andretti will not only continue to earn her regular salary, but she will gain valuable skills and perspectives to share with her GSK colleagues upon her return.

Andretti is certain that being prior military helped her in the PULSE selection process. “One of the questions on the application asked if I would be able to be away from home for a long stretch of time,” she said. “That was a no-brainer for me, as I had undertaken several long deployments in the Navy.” Through the PULSE Volunteer Partnership Program, Andretti is able to continue traveling and experiencing new cultures while sharing her skills with others.

She acknowledges that she is lucky to have landed at GSK. Finding the right company is not always easy. Her advice to veteran job seekers is simple: “Look for a company that values you as much as you value them in return,” she said. “When you find that company, you will be willing and able to adapt and grow as an employee.” Andretti knows this well. Her transition out of the military was not without challenges. But with a little luck and a leap of faith, she found her match with GlaxoSmithKline.