In 2009, Kristopher Green was an Army Ranger. If you asked him on the day of his discharge where he would be in 10 years, he wouldn't have said software engineering. But three career shifts later, the determination, problem-solving, and ability to work on a close-knit team developed in the 75th Ranger Regiment made him a perfect fit for The Home Depot's corporate headquarters in Atlanta 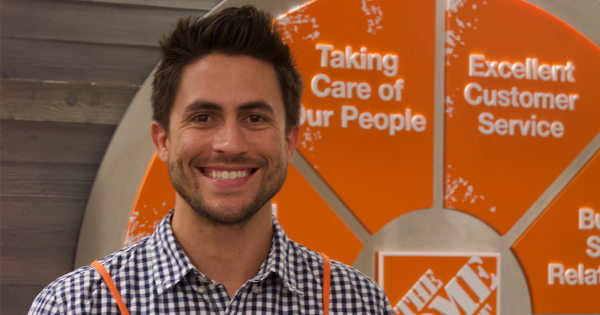 Editor's Note: The following story highlights a veteran at The Home Depotcommitted to including talented members of the military community in its workplace. The Home Depot is a client of Hirepurpose, a Task & Purpose sister company. Learn More.

In 2009, Kristopher Green was an Army Ranger. If you asked him on the day of his discharge where he would be in 10 years, he wouldn't have said software engineering. But three career shifts later, the determination, problem-solving, and ability to work on a close-knit team developed in the 75th Ranger Regiment made him a perfect fit for The Home Depot's corporate headquarters in Atlanta.

Growing up with a father in the Army, Green always imagined himself joining the military. After high school, he didn't feel ready for college, so he decided to use an Option 40 contract to enlist in the Army Rangers in 2005. After his first deployment to Iraq, Green went to Ranger School to become a team leader. He led a four-man fire team through hundreds of missions across two additional combat deployments in Iraq and Afghanistan. Although the work was demanding, Green enjoyed the camaraderie, as well as the continuous learning and creativity necessary for good leadership.

“A team leader should have mastered everything that anyone on his team will have to do,” he says. “The hardest part was just trying to be a good team leader and earn the respect of my guys by showing them the right way to do things while being a respectful person.”

But ultimately, Green found the intensity of the Ranger lifestyle — which routinely demanded 12-hour workdays, weekend trainings, and three- to four-month deployments every seven to eight months — was incompatible with his personal life. Hoping to have a family one day, he decided not to reenlist when his four-year contract came to a close.

From workouts to web development

Green pursued a degree in business administration and management at Georgia Southern University, with his sights set on joining the FBI. But he quickly fell in love with fitness and opened a gym after his graduation.

“I was able to use some of the leadership skills I developed in the Army to lead the gym as a whole and start developing that camaraderie,” Green says. “I enjoyed having that in the Rangers, so I figured if I could create that same sense in the gym, people would be inclined to join.”

He was so successful, however, that his work once again became all-consuming. All of his and his wife's friends were gym members, and they spent the majority of their time outside of work talking about fitness and nutrition. Afraid of losing his passion for fitness to overwork, Green sold the business in 2017 and began thinking about the next phase of his career.

As it happened, Green's college roommate had majored in computer science and recommended work in programming. A few months later, Green enrolled in a 12-week web developer program; a Home Depot recruiter contacted him within days of his graduation. Green was the first member of his cohort to be hired and believes that his military experience gave him an edge.

“It shows you have a lot of determination, and a sense of loyalty,” he says. “I think companies value that a lot.”

For almost two years, Green has worked at The Home Depot Store Support Center, developing and maintaining the internal programs merchant planners use to stock shelves around the country. He works side by side with his team members each day, sharing the same computer with a partner. Not only does Green use his small-team experience from the Army Rangers to succeed, but also his ability to learn on the job — and his well-honed persistence.

“Once you realize there is a bug, sometimes it's pretty obvious, but sometimes it's not,” he says. “You have to be determined to dig through the code and try to replicate what the user was doing to uncover the bug. It could take all day.”

Green loves the daily challenge in computer programming. Being able to take a wider perspective has been invaluable in his programming work from the beginning. In the Rangers, he says, “they always tell you to take the path of least resistance when you're entering a room; this mentality can be applied to almost anything. If you detach for a second and really think through the situation, you're more likely to find the answer.”

Supporting a company that supports the military

Green welcomes the degree to which The Home Depot supports the military, in both the workplace and the community. He's a member of The Home Depot's Military Appreciation Group, which organizes events at the Hartsfield-Jackson Atlanta International Airport's USO lounge to recognize the service of veteran associates and volunteers.

The Home Depot also participates in the Training with Industry program, in which active duty officers spend a year working with Fortune 500 companies to learn corporate skills The Home Depot implements supply chains so then they can take that information to the Air Force.”

But what's most important to Green is he has finally found a career that allows him to maintain balance between life at work and home. He encourages all service members considering civilian work to seek out the same.

“The Home Depot is a great place to work. There are great benefits, and they really give you the ability to have a work-life balance,” Green says. “If that's one of the big reasons you're leaving the military, you don't have to join a big corporation that overworks you. The Home Depot really wants to take care of its associates.”