Video game company Blizzard Entertainment, which creates blockbuster franchises like World of Warcraft and Overwatch, has stood behind veteran employment for years 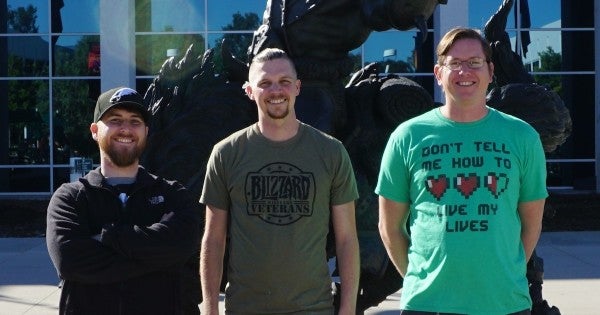 Video game company Blizzard Entertainment, which creates blockbuster franchises like World of Warcraft and Overwatch, has stood behind veteran employment for years. On top of hiring veterans, they support many related programs, including Activision Blizzard's Call of Duty Endowment. Blizzard's goal there is to help veterans find careers by supporting organizations that prepare veterans for the job market.

By participating in the Hiring Our Heroes Corporate Fellowship Program (CFP), Blizzard gives transitioning veterans the opportunity to work in the civilian world before they leave the military. Service members pair up with companies that match their skill sets and desired career path. They then work four days a week for that company and attend a weekly class with their fellowship cohort. Many service members are offered a job following their internship, either with the same company or with another participating company.

Tim Vasconcellos graduated from the University of Utah with a degree in international studies and an emphasis in the Middle East. Quickly after that, he set off as a surface warfare officer in the US Navy, spending two years in Japan and a lot of time on a ship. After four years in the Navy, he knew that it wasn't the career path for him. “I wanted to be around for my family,” he said. “I met so many great people, from such diverse backgrounds, but I didn't really feel like I fit in.”

Vasconcellos has no such concerns working at Blizzard Entertainment, “At Blizzard, I'm just one of them. It's a much better fit for me,” said Vasconcellos. He is currently finishing his probationary phase as an associate project manager in the broadcast department. He works specifically with broadcast technology and equipment, helping to make sure company events such as BlizzCon run smoothly. Some of his current responsibilities are similar to what he did in the Navy, but this time, they aren't life-and-death scenarios.

One thing that is different at Blizzard is the ability to be creative. “The industry is very different from the military, and I'm letting myself explore the field,” he said. Vasconcellos is working on his Project Management Professional certification, among others, and continuing to learn the details of his position. The creative culture of Blizzard also promotes collaboration between coworkers in their off-time. Vasconcellos has joined the company's writers association, and he's working on a novel.

The future is bright for this former Navy officer, and he owes it all to the internship opportunity Blizzard gives service members. While figuring out the paperwork and next steps on the military side wasn't easy, Vasconcellos wouldn't change his experience for anything. “I love working at Blizzard, and I wouldn't be able to have done it without this program,” he said.

For some veterans, the CFP offers an “in” to their dream company. For others, like Edward Keller, it gives them a career boost they would never have had otherwise. Keller served for nine years in the Marine Corps as a military policeman and then an imagery analyst. With no college degree, Blizzard's veteran programs moved his career forward more than he could have ever imagined.

Now he's working for Blizzard corporate security as a physical threat assessment analyst. Keller's job involves security implementation and coordinating with a contracted guard service. He has also enrolled in college, to start in spring 2019, and has advancement goals within the company as well. “If I could stay with Blizzard forever, I would,” he said. “I plan on working my way up to a senior analyst and then a physical security manager.”

Keller says his transition from the Marine Corps to Blizzard was smoother and better than expected. “We have a Blizzard Military Veterans group that has helped get CFP participants settled,” he said. Each new veteran hire gets offered a mentor who can show them around and explain the culture. Blizzard's office culture, it turns out, is one of Keller's favorite parts of the job. “I brought my dog to work today,” he said. “Every day is dog day. The dress code is relaxed, and I have a full beard.”

That's not all. Most importantly, Keller loves the way everyone at Blizzard is accepted for exactly who they are. He is incredibly grateful for what he's gained through the CFP and encourages everyone to consider the program. “I was afforded a great opportunity where there wasn't an opportunity to be had,” he said.

The CFP isn't just for those transitioning after their first or second enlistment. Retired Air Force MSgt. Nathan Mitson also took advantage of the program. “The CFP is intended for those E5 and up in their career,” he said. After 20 years in aircraft maintenance, Mitson was ready for something else. He finished his engineering degree from the University of Maryland University College.

As he approached retirement, Mitson heard about the CFP from an old friend whose experience with the program and with Blizzard had been excellent. The CFP included all the lessons required to get a job in the civilian world, not to mention the added help. “I started with a networking event, where the participating companies and service members could meet and talk,” Mitson said. “Then the two are paired up based on resumes, career goals, and interest.”

Mitson is working in software development, writing programs to help quality assurance testers do their jobs better. His post-retirement career has nothing to do with his military career, but now he has a degree and experience in a mid-level programming position. His goal for the next five years is to earn a senior programming position. “There are other ways to lead people besides being in a management position,” he said. “I wanted to do the real job and lead people, and a senior programmer gets to do just that.”

All three of these veterans have bright civilian careers ahead, and they're grateful to Blizzard for the opportunities to discover them. With the support of the Hiring Our Heroes Corporate Fellowship Program, a surface warfare officer, an aircraft maintainer, and an imagery analyst have found paths into the future that fit them perfectly.

Learn more about the Call of Duty Endowment and how you can start your next career with the Corporate Fellowship Program on their websites.