How One Veteran Found A Great Career In The Trucking Industry

Editor’s Note: The following story highlights a veteran who works at Roehl Transport. Committed to filling its ranks with talented... 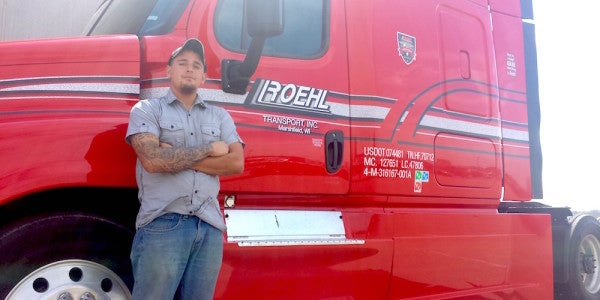 Editor’s Note: The following story highlights a veteran who works at Roehl Transport. Committed to filling its ranks with talented members of the military community, Roehl Transport is a Hirepurpose client. Learn more here.

Soon after leaving the military, 24-year-old Jesse Delph found himself in a difficult position — unemployed with $300 to his name. But all of that changed as soon as Delph met Jake Howey, a U.S. Army veteran and Honor Program specialist with Roehl Transport, an award-winning trucking company headquartered in Wisconsin. Within an hour and a half, they completed the necessary paperwork for Delph to join a two-year apprenticeship program allowing him to receive G.I. Bill benefits from the Department of Veterans Affairs, in addition to a steady paycheck from Roehl.

“It’s just a really great company to go through for the simple fact that they actually care about you and they’re willing to work with you,” said Delph, now halfway through his apprenticeship. Delph served as an active-duty Marine from 2008 to 2012, where he worked as a diesel technician tending to the largest hauling trucks with the 1st Marine Division. With a lifelong interest in big rigs, Delph decided to follow in the footsteps of his father, grandfather, and uncle who had driven trucks before him.

The best companies for veterans are those with training programs specifically catered to the needs and skills of former service members. Delph chose a career with Roehl Transport after researching various truck driving companies and the programs they offered. “Roehl stood at the top in pretty much every category that I was looking at,” said Delph, who lives in Wisconsin when he isn’t on the road.

Veterans like Delph have found lasting careers in the trucking industry, where drivers are in high demand amid a growing nationwide shortage of 30,000 truck drivers.

While it’s true that truck driving doesn’t have a reputation as the most glamorous and high-paying career, it remains an attractive occupation to many Americans and is even growing in popularity among women. Currently comprising just over 5% of the trucking workforce, the share of female drivers is growing as they become more accepted in the industry than ever before. “Why trucking? Because I've been looking for a job where I can get good benefits, actually good pay,” said Judy Sanchez, a trainee at the Dootson School of Trucking in California, in an interview with NPR.

Roehl apprentices who are veterans can use their G.I. Bill benefits toward the program’s schooling even while earning a respectable truck-driving salary. In nine months, apprentices will be on their way to earning $50,000 or more per year. Throughout the apprenticeship, they’ll receive on-the-job training experience and become Department of Labor-certified, heavy-duty truck drivers.

The apprenticeship program is available to all Roehl teammates and is closely connected with a program for honorably discharged veterans, reservists, and National Guard members. The Roehl Honor Program allows veteran employees to receive recognition and perks for their service, such as special truck decals.

Roehl founder Everett Roehl in his U.S. Army uniform in 1961.

Roehl will even pay recruits to earn their commercial driver’s licenses before beginning on-the-job training. Roehl’s support for veterans stretches back to the company’s founder, Everett Roehl, who used his skills driving trucks with the U.S. Army to start his own trucking service in 1962.

Delph, who’s been with Roehl since May 2014, enjoys the flexibility of his classroom coursework schedule combined with his solo time on the road. Apprentices typically spend up to two weeks driving with a Roehl trainer before taking a driving test to determine if they are ready to begin driving solo, Delph explained.

Delph often chooses to stay on the road for stretches as long as a month and a half, followed by a week at home, but some Roehl employees choose stretches as short as a week, followed by a week off at home. Delph likes the fact that drivers have that freedom to choose between various work schedules, depending on how often they want to be at home and how much distance they want to traverse.

Roehl’s innovative “Your Choice” Pay Plan rewards the best-performing workers. “Here, if you want to work more you get paid more. You want to work less, you get paid less,” Delph explained. “It’s all based on an individual basis. That’s the one thing that I love about trucking.”

Another aspect Delph likes most about truck driving is being able to travel and see new places, which inspires a joy similar to how he felt during a seven-month deployment on a U.S. Navy ship. Like other veterans, he’s accustomed to being away from home for much longer than his time on the road with Roehl. “It gives me a chance to see the country that I said I’d be willing to give my life for,” said Delph about his apprenticeship.

Click the link to learn more about how you can apply for Roehl Transport truck driving jobs or visit theHirepurpose jobs page.