How One Veteran Found A Sense of Purpose At Motorola

Some people learn to love the jobs they have; some spend years searching for the perfect one. For some, it all comes together without even trying. For Travis Johnson, a Master Sergeant in the Louisiana National Guard, it was the latter 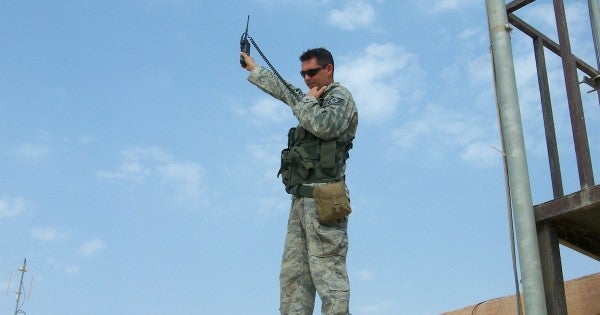 Some people learn to love the jobs they have; some spend years searching for the perfect one. For some, it all comes together without even trying. For Travis Johnson, a Master Sergeant in the Louisiana National Guard, it was the latter. His civilian job and his National Guard job both bring him incredible joy and fulfillment.

It all started with service

“I enlisted in the Marine Corps Reserve in 1990,” Johnson said. “I wanted to contribute; I wanted to do my part.” Since then, Johnson has served as a Humvee driver, a Combat Correspondent, and now in the combat communications field.

After serving for almost 30 years, Johnson still loves his work. “In the military, I know what I'm doing makes a difference,” he said. “I have a purpose, and I'm doing things that are impactful.” As a National Guardsman, he gets to serve his state directly. In fact, the part of his job focusing on disaster response is what keeps him reenlisting. And it ties directly into his civilian career.

After Hurricane Katrina in 2005, Johnson spent some time at the state emergency operations center, working to make communication between civilian and military leaders possible. He then supported the New Orleans Police Department with security in the city. “We were able to help people who had lost everything, and it was a great feeling,” he said.

Motorola was a natural choice

“I've been using Motorola products throughout my military career,” said Johnson. “I was familiar with and I trusted their products.” In his civilian role as a state Interoperability Program Manager, the statewide radio network used during emergencies was built by Motorola. “I used their radios when doing security during Hurricane Katrina,” he said. “When one of my Airmen was hurt during a deployment in Afghanistan, I called for help on a Motorola radio.”

Along with his personal experience using Motorola products Johnson loves how supportive the company is of military service. “I've never had a problem during activations,” he said. “They are very accommodating for military leave.” The company has a lot of experience working alongside the military, as well as law enforcement and first responder communities.

A continued sense of purpose

“Working at Motorola gives me the same sense of purpose I get from the military,” Johnson said. “My job is to provide solutions to first responders to make them safer and more efficient. I get to help them do their job: protect others.”

For veterans considering working at Motorola, Johnson strongly encourages them to do so. Motorola has been working in mobile communications for over 90 years, specializing in providing and supporting equipment for first responders and disaster relief across the world.

“Veterans have some really useful skills and experiences that will help them be successful at Motorola,” Johnson said. “The company recognizes and appreciates the skill sets veterans bring to the table.”

Johnson, like many veterans, understands firsthand the importance of communicating with others. He also knows how fulfilling it is to help people be their best in the moments that matter. “I know what it feels like to call for help on that radio,” he said. “I have a lot of faith in that Motorola radio. I know how it works. It worked for me, and I know it's going to work for them.” The sense of purpose that Johnson finds in his military service has met its match in the sense of purpose he has working for Motorola, helping people get home safely at night.

With just over a year on the job so far, Johnson is focused on learning as much as possible so he can serve his customers to the best of his ability. As a Senior Account Manager, Johnson focuses on providing his customers with what they need to do their jobs. His experiences using Motorola in various circumstances helps him be both relatable and incredibly knowledgeable, which helps him develop the relationships necessary to do his job well.

“I don't think I could do this job for someone else,” he said. “I'm not a salesperson; I'm just that passionate about what Motorola does. I believe in the mission, and I believe that is why Motorola is so successful.”