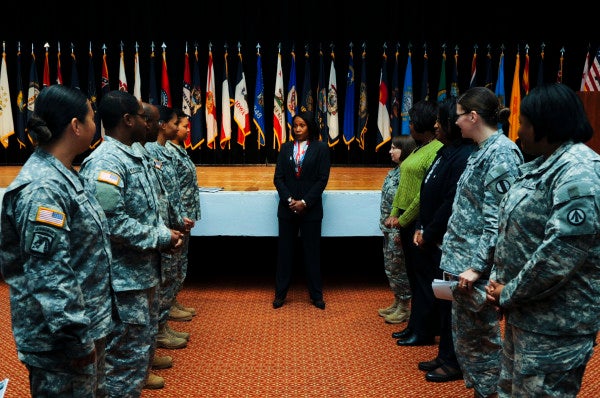 I’ve spent a good many years helping organizations identify future leaders and preparing those leaders, particularly women, to take on senior roles. In all that time, I have never met a group of more accomplished, dedicated women than those attending a recent workshop I ran aimed at counseling female veterans transitioning into the civilian workforce.

They had served as officers and led others in combat, tackled complex administrative matters, and advised on strategic planning. They successfully met every challenge encountered during their active-duty years. Yet these strong, focused women were struggling with their latest challenge: finding the right career fit in civilian life.

Two common themes tie these women together. They don’t understand how their military experiences and accomplishments translate to the civilian workforce; how their leadership skills, so prized in the military, can pay big dividends when properly presented to business, nonprofit, and government organizations after they hang up their uniforms.

It’s that “properly presented” part that often gets in their way. It is my experience that women in general tend to underplay — or not fully understand — the significance of what they’ve accomplished. That tendency is taken to a new level for women in the military.

One of the workshop attendees — a former Navy helicopter pilot with both combat and administrative assignments under her belt who oversaw flight crews and staff personnel — she was also responsible for signing off on and managing large budgets and expenditures. Nonetheless, she shrugged when asked what management skills she had that would be attractive to a civilian employer. “I don’t know,” she responded, “I just did my job.”

In the civilian workplace, it’s important to stand up for and promote yourself. That’s particularly true when interviewing for a job. It’s the difference between “telling” about yourself and “selling” yourself.

Here’s an example I use with clients:

Telling it: “I’m a supervisor of HR generalists and recruiting functions with 10 years of experience at company headquarters.”

Selling it: “I’m a supervisor with 10 years successful management of six HR generalists and three recruiters for a regional company with three administrative officers and eight manufacturing plants.”

Selling it is not something that comes easy after years on active duty. But to make a successful transition, getting out of your comfort zone and showcasing yourself is an important way — sometimes the only way — to rise above the competition.

The second commonality among these women is not understanding the civilian workplace terrain and where they might fit.

Most of them had not begun to explore that unfamiliar turf until just before leaving active duty. Some took advantage of the government’s transition assistance program, offering guidance in resume writing and other practical transition matters, but not the “softer skills,” which are so important to finding the right career fit.

The idea of choosing a job, let alone a workplace environment and culture, is something these women never had to face while on active duty.

None of the women had investigated the kinds of organizations that make for a “cultural” fit. In fact, the idea of “corporate culture” was alien to most of them until they heard from a panel of invited women veterans who made successful transitions. They listened as the vets shared their experiences about transitioning to the civilian workforce. Some had easier times than others; all had compelling stories to tell and lessons to teach.

One of the panelists related her story of trying everything from starting her own business to working for a state government official before finding her niche as an executive with an aerospace technology firm. “I tried different things … explored many things … before finding the right fit,” she told the group.

Another offered the advice that service members getting ready to transition need to start thinking about it well in advance. Don’t wait until the last minute.

Good advice. Moving from a military to a civilian work environment can be like dropping by parachute into a foreign country without any information about the landscape, the people, customs, language, or any of those things that would help make the landing easier.

Even management and communication styles are different. In the civilian work environment, management styles can be the difference between loving your job and making a quick exit to a new employer. The transitioning woman who doesn’t take the time to understand, recognize, and learn how to work with the range of styles in both communications and management does so at her own peril.

Aside from the obvious difference between the military vs. civilian management frameworks, there is the more subtle differentiation between the way men and women manage, almost invisible in the military, but quite prominent in a civilian workplace.

While generalities are always dangerous, and each workplace is different, it’s my experience — as documented in many recent studies, including a series by The New York Times about women at work — that men tend toward individualism, avoid questions, and are dominant managers, while women are more apt to operate by building relationships, asking questions, and being supportive. These differences can get in the way of a career-minded veteran who only has her military workplace experience to lean on.

If you’re getting the picture that there’s a lot more to transitioning from the military to the civilian workforce than filling out your DD-214, writing a “civilian” resume and choosing new clothes to wear, you’re right. Now, it’s just you who will carve out a career path and maneuver unknown territory. The sooner you recognize that and take the appropriate steps to ensure success, especially if you’re a woman, the better equipped you will be to meet and overcome any career challenges.