Much of America doesn't understand what it means to be a member of the National Guard or the Reserves. But today's citizen soldiers, sailors, airmen, and Marines are exceptionally skilled at balancing their military duties with their family lives and civilian jobs 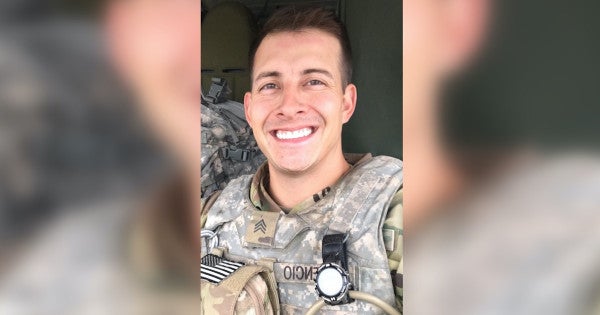 Editor's Note: The following story highlights a veteran at IBMcommitted to including talented members of the military community in its workplace. IBM is a client of Hirepurpose, a Task & Purpose sister company.

Much of America doesn't understand what it means to be a member of the National Guard or the Reserves. But today's citizen soldiers, sailors, airmen, and Marines are exceptionally skilled at balancing their military duties with their family lives and civilian jobs. Meanwhile, it takes an understanding, flexible, and supportive employer to ensure that America's part-time service members have the tools to succeed in both careers.

Josh Atencio knew he had found a great opportunity when he accepted a position at IBM after graduating from Minnesota State University, Mankato. But the Minnesota National Guardsman didn't know how well IBM would support his job as a citizen soldier.

“When I was in school, balancing my coursework with drill and work was tough, but I made it work,” he says. “When I graduated and started working at IBM, I had no idea how challenging it would be to balance both my military and civilian careers. But my teammates and leadership at IBM are incredibly supportive, and give me the flexibility I need to ensure I can be successful in both arenas.”

Driven by a family legacy of service, Atencio enlisted while earning his undergraduate degree. He dutifully pursued his studies while also drilling and spending his summers conducting and leading exercises with the National Guard. At the midpoint of his time as a student, Atencio deployed with his unit to the Sinai Peninsula in support of the Multinational Force and Observers. There, he was liaising between Egyptian and Israeli military forces to keep the peace. “I came home from that yearlong deployment knowing I needed to finish my degree quickly and get started with my civilian career,” he says. Atencio's sights were set on IBM, a longtime icon and leader in the tech industry — and he was thrilled when offered a starting position as a financial analyst.

As an infantryman in the National Guard, there's little technical crossover between Atencio's job in the National Guard and his job at IBM. However, he does rely heavily on soft skills gained while serving in the military. In his position at IBM, Atencio now liaises between teams. “I've learned in the Guard how to communicate in different styles to ensure that people of all types can work together to achieve the mission,” he says. “And similarly, I rely heavily on the skill of flexibility as well. In the Army, sometimes plans change quickly, and knowing how to adapt is critical.”

“Above all, though, IBM has been an incredible supporter of my military service,” Atencio adds. “The support and flexibility from my leadership has enabled me to go away for drill weekends or training events without the added stress of missing work.” With a commitment to hire veterans and prepare them for the civilian workplace, IBM knows the value that veterans and transitioning service members bring to its corporate offices.

Atencio urges transitioning service members and veterans to consider IBM, where opportunities abound. “Do your research and know what you want in both a potential career and an employer,” he says. “But most of all, use veteran service organizations to help navigate your job search. It can be a challenging time, whether you're transitioning from active duty or you're a Reservist or National Guardsman looking for a supportive employer. But there are tools and resources in place to help.”

In addition to its commitment to hiring veterans, IBM also offers veteran employees support and space to succeed through their employee resource group. “It provides us a safe space to ask questions, network, get help, and navigate the military/civilian divide,” says Atencio. “I'm so thankful and proud to work in a place that supports all of me, both as a soldier and an employee. And for any military members or veterans looking for a great potential employer, I say start with IBM — you won't regret it!”