Editor’s note: Committed to filling its ranks with talented members of the military community, TIAA-CREF is a Hirepurpose client. Learn morehere. Full... 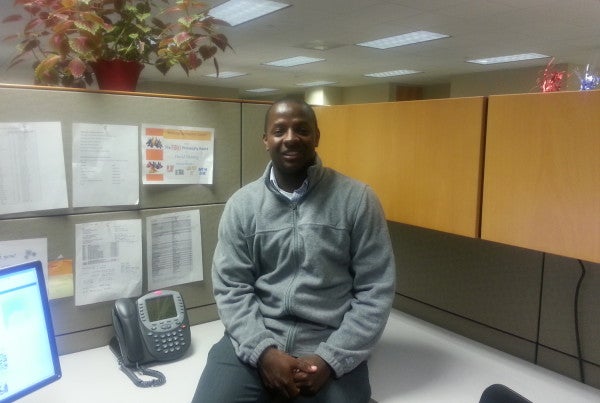 Editor’s note: Committed to filling its ranks with talented members of the military community, TIAA-CREF is a Hirepurpose client. Learn morehere.

When David Fleming separated from the U.S. Army in April 2014, he was ready to explore new careers. Having spent nearly a year preparing for his job search, Fleming knew he wouldn’t settle for just any job. He hit the military job fair circuit where he met a recruiter from Hirepurpose. Within a short time, Fleming was sitting in an interview with hiring managers from TIAA-CREF, a national financial services organization that specializes in retirement services for the academic, research, medical and cultural fields. Seven months later, the New Jersey native is a brokerage operations associate analyst.

Fleming, 28, joined the Army in 2010 after graduating from Rutgers University with a degree in political science. He struggled to find a job he loved, having graduated in the middle of the recession. “I was working jobs that I did not care for and I struggled to find a purpose for what I did and where I was going,” Fleming says.

While he had not planned to join the Army, military service was part of his family lineage. Fleming’s father is a colonel in the Army. Looking back, he describes his service as the best decisions he ever made. “I can’t imagine where I would be if I never made the decision to serve.”

In the Army, Fleming served as an analyst and deployed twice to Afghanistan, in 2010 and 2012. Leading up to his date of separation, Fleming spent nearly a year making contacts and speaking to others who worked in the civilian market, which helped him quickly narrow down careers that would be right for him when he got out of the military.

Additionally, although his education does not directly coincide with his current job, Fleming says the things he learned while going to school better prepared him for his search and taught him the intangibles needed to be an effective member of a professional team.

After meeting a Hirepurpose recruiter at a Georgia job fair, Fleming passed on his resume and quickly received calls from a number of companies. When he met with TIAA-CREF, he knew the company stood out from the rest. “I think the leadership and the people I work with are outstanding,” Fleming explains. “It’s also impossible to learn everything about this job. There are so many things involved in what I do now that I am constantly learning something.”

In his role as a brokerage operations associate analyst, Fleming assists with the opening, funding, and on-going maintenance of discretionary managed, fee-based accounts, as well as the self-directed accounts. He also assists clients with account-related issues.

Fleming attributes his success in his civilian career to the discipline he learned in the Army. “Timeliness, professionalism, discipline, and teamwork are the first thing that comes to mind when I analyze the parallels of my military experiences and my current position,” he says. Additionally, his willingness to branch out of his comfort zone and take a job in a field he didn’t have experience in, allowed him to explore job opportunities that he may not have considered otherwise.

TIAA-CREF has also been supportive of Fleming’s success. The company has an employee-run military veterans employee resource group, meant to provide recognition, development and networking opportunities to employees with military experience.

Fleming advises using the transition resources provided by the military to your full advantage. “These resources are there to help and have a myriad of job information and skill-development workshops to make the transition to the next chapter of your life as comfortable as possible.”

“Do not wait until the last few months of your military obligation to start thinking about the future,” he adds.

“It is never too early to start working on your resume and interviewing skills.”