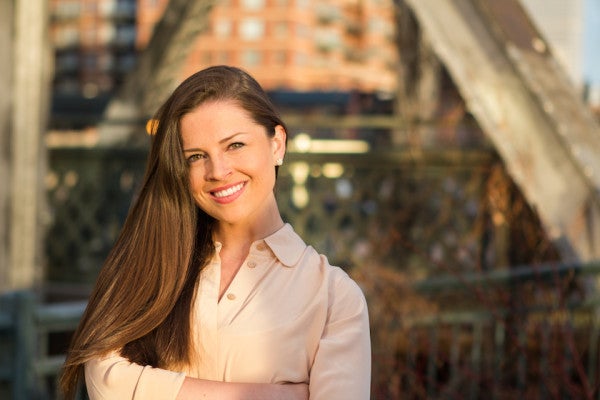 Today at Task & Purpose we’re breaking from tradition: While we typically use our Job Envy series to feature former service members who’ve done amazing things since leaving the military, Emily Núñez Cavness’ story is just too cool not to share.

The 24-year-old Pennsylvania native is just like any other active-duty Army officer — she wakes up early for physical training, briefs her unit’s maintenance stats at training meetings, and spends her fair share of time in the field — except for the fact that she also happens to run her very own company, Sword & Plough, as chief executive officer and co-founder.

At Sword & Plough, Cavness and her team aim to reduce waste by repurposing military surplus material into handbags that are just as beautiful as they are functional. They’ve partnered with businesses committed to hiring veterans, and to this date, have employed a total of 38 veterans and hope to grow that number as the business expands. And though it’s barely been two years since Cavness launched the business in summer 2012, Sword & Plough has made a name for itself, having been featured on such high-profile media outlets as Fox & Friends, Esquire, and Business Insider.

How one idea changed it all

It all started with an idea during Cavness’ senior year of college, just a few months before she was set to commission. Having been one of only a handful of reserve officers' training corps cadets during her four years at Middlebury College, she wanted to find a way to bridge the gap between civilian and military life.

“Sometimes I had trouble trying to relate what I was doing on a weekend field training exercise to my classmates,” Cavness explains. “I’d come back after Halloween weekend, when everyone else was going to parties. I just had different stories to share about, say, the reconnaissance lanes we were doing that morning.”

Cavness also loved the idea of using sustainable business practices, and suspected that much of the material that goes into manufacturing the military gear we all know and love (think Army-green duffel bags) went to waste. “Growing up on Army posts, I was aware that a lot of surplus is deemed unserviceable and is just thrown away or burned,” she says.

She wasn’t quite sure how she wanted to use that material, though, until she realized that the answer was literally all around her. “Being on a college campus, you see students with bags of all sorts, so I thought, well, we could turn it into fashionable bags that would be desirable to my friends and people like us.”

How she launched Sword & Plough

Cavness loved the idea of creating beautiful bags that could start conversations among civilians about military culture, while also promoting eco-friendly practices. What really helped her idea take flight, though, was the support she got from her family, friends, and academic advisors. “My boyfriend at the time, Cully, was really involved in the student investment committee and had taught a student entrepreneurship class.”

He and her sister, Betsy Núñez, encouraged her to enter a business competition at Middlebury College only one week after she first had the idea for Sword & Plough. She ultimately took home the $3,000 first-place prize, which, in her words, “gave us a ton of confidence and some resources to really begin.”

Cavness and Cully have since gotten married, and he and Núñez serve alongside Cavness and Haik Kavookjian as the four core members of Sword & Plough. The team has performed well at two other business competitions, including the Dell Social Innovation Lab at Middlebury College, which Cavness actually ended up delaying her active-duty start date to attend. “I found out I was accepted to the program, but I wasn’t sure if I’d be able to go, because of course, I had to be at Fort Huachuca in two weeks.”

Thanks to her very understanding professor of military science, though, Cavness was able postpone her basic officer leader course, and further develop the plans for Sword & Plough.

“We wouldn’t be where we are now if we hadn’t been able to go that summer,” Cavness explains.

On bridging the civilian-military gap in her own life

Unlike most veteran entrepreneurs, Cavness’ tenure as the head of her company has completely coincided with her time as a soldier. She’s had to balance the rigors of Army life with the challenges of running a business, and was really put to the test during her deployment to Kandahar, Afghanistan, last year.

“When I was in Afghanistan, I tried to lead regular Skype calls with our team, but sometimes those were cut short or just couldn’t happen based on the optempo,” Cavness says.

She credits her ability to focus on her mission while she was deployed to the outstanding team she built. “Having such a talented and dedicated team who’s ready to step up when someone can’t be there makes things a lot easier.”

Now that she is the executive officer for a military intelligence company with 10th Special Forces Group, however, her Army job has become much more demanding as she deals with property issues and learns the many different facets and forms of military intelligence. Cavness says she’s still able to stay on top of Sword & Plough by “dedicating a lot of free time on the weekend when I could have just been relaxing.”

Her advice to other service members

Cavness says that Sword & Plough would have never come to be if she had never shared the idea with another person.

“I think if the idea had lived in my head, I never would have acted on it. So if you have an idea that you feel strongly about, don’t be afraid to tell someone, because when you do, it becomes something that’s real, something that can be built upon.”