Job Envy: This Army Vet Launched Her Own Clothing Company For Servicewomen And Veterans 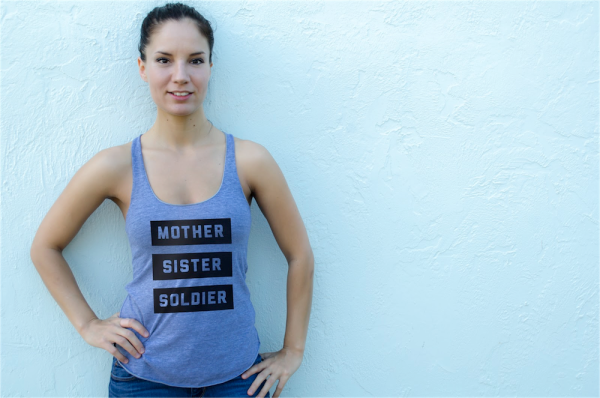 From Army brat to Army soldier

Growing up as the daughter of a soldier, Noky traveled with her family from post to post. Her father encouraged her to join the Air Force, but “one thing led to another,” and she enlisted in the Army in 2002 as an air traffic controller and sub-system repair specialist.

“I was basically a radar tech,” said Noky, who recounted her time in the service, working with old Navy equipment, as one of the best. “It’s like having a whole new family.”

Noky stays in touch with her friends from the service, adding that during her time in the ranks she learned a lot. “It was one of the most challenging, but most rewarding times,” said Noky.

In addition to learning her job and making friends, Noky also learned the value of discipline — being focused and getting things done. She did her best to live by the Army values.

“I try to live by those — integrity, honesty, and being disciplined,” explained Noky. “Doing the right thing and seeing it through.”

Transitioning at “the worst time”

Noky served five years, leaving the service in 2007. Shortly afterward, the economy took a turn for the worse. She started attending community college in upstate New York, and applied to her dream school, the Fashion Institute of Technology in New York City.

After graduating from FIT in 2012 with a bachelor’s of science in graphic design, Noky received several job offers from firms located in Manhattan. While she enjoyed the excitement that comes with living in the city, she needed to prioritize her family life and take care of her young son. She had another reason, as well: she wanted to move down south.

“I tasted the sun, and I going back,” said Noky, whose last duty station, at Hunter Army Airfield in Georgia, left her with a taste for warmer weather.

Starting her own clothing line

When she first came up with idea of starting a clothing line for women veterans, Noky was working full time as a web designer. She left that job in the summer of 2014 in order to concentrate on standing up the company.

“I decided I would do Lady Brigade 100%,” said Noky. At first, she spent the majority of her time searching for American manufacturers that could provide good-quality items, as well as ensuring that she was not replicating designs or phrases that other designers had trademarked. “It took four months to get everything off the ground.”

She started selling her designs in November 2014, and by January she would spend most of her time filling orders at night, thinking up designs, and balancing her other work as a freelance web designer.

“I knew what I was doing was different, but I didn’t realize it would be so well received,” said Noky, adding that after an article appeared in Buzzfeed earlier this month, she received hundreds of emails from fellow veterans. “I didn’t realize how much it would impact people.”

“I am on a mission now,” Noky said, adding that she is planning on hiring an assistant to help her with order fulfillment. “Right now, the orders are crazy.”

One unpleasant side effect of the business has been that Noky has seen her carefully researched, original designs appear on other websites, with only one or two details changed. In one case, she saw one of her pirated designs appear within 48 hours of launching it on her site. As a result, she is waiting to release some of her newer designs, which include Air Force and military support graphics.

Still, the business has its own rewards. Having transitioned from the military as a junior enlisted soldier, Noky spoke of how thrilled she was to find women veterans of all ranks and sizes purchasing her designs.

“I wasn’t a high-ranking person, but a colonel just ordered my shirt!” Noky said.

Life as a woman veteran

While creating feminine clothing for servicewomen and veterans is one of Noky’s goals, she is also trying to broaden the conversation about women in the military. One of the emails Noky received accused her of making the graphic designs in order to attract attention to her military service from strangers. She explained, she didn’t start the company to get thanks, but rather to start a conversation. Another time in an airport, a stranger stopped her and told her she didn’t look like she was in the military.

Women are not always immediately perceived as veterans, and some women don’t necessarily identify as veterans, Noky has found. By providing a fashionable opportunity for women to sport their service, she explained, “It does create an awareness that you don’t normally have.”

Noky related an anecdote in which a woman who had served in the peacetime Army wrote to her asking permission to purchase one of the veterans’ shirts, even if she hadn’t been deployed.

In addition to her work with Lady Brigade, Noky is organizing the first Florida Women Veterans Conference, which will occur April 17–19 in Sarasota, Florida. The purpose of the conference is to bring female veterans together and inspire and educate them through the work of other women in the military.

This is Noky’s advice for transitioning soldiers, as well as veterans who might be interested in starting their own companies. “I didn’t like what was not available for women, so I decided to change it.”