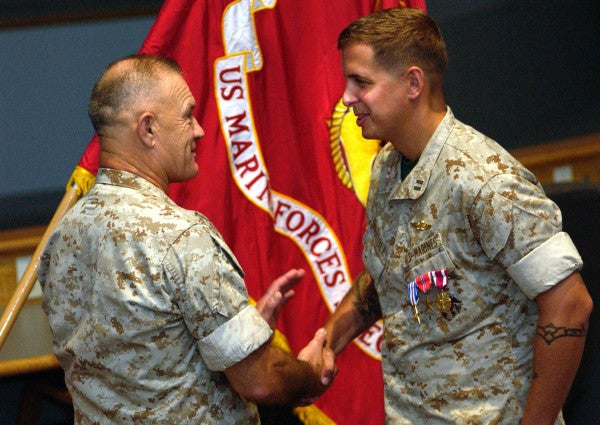 Jason Schauble, a recipient of both Silver and Bronze Stars for displaying courage and leadership in combat while deployed in Iraq in 2004-2005, is the chief revenue officer for SilencerCo, one of the largest and most innovative sound suppressor manufacturers in the world. The company produces silencers and accessories for firearms including rimfire, pistols, rifles, and even shotguns. In this role, Schauble leads marketing, sales, customer service and business development and says he likes the challenge of growing a small company, learning new things every day, and working with dynamic, intelligent people who invent things.

Schauble enlisted in the Marine Corps after receiving a bachelor’s degree from Bates College, figuring if the Marines worked for him as an enlisted guy then he would try to become an officer. In 2003, Schauble moved into the reconnaissance community and deployed to Iraq, where he first received a Bronze Star with a combat V for valor for coordinating artillery fire and sniper operations during in Hit and Fallujah from Oct. 11 to Nov. 16, 2004.

Shortly thereafter, in January 2005, Schauble was shot and seriously wounded trying to recover a fallen Marine from a farmhouse while leading his assault team inside insurgent-controlled territory. He was awarded the Silver Star for “conspicuous gallantry and intrepidity in action against the enemy” and medically retired in 2006 due to the wounds he sustained in combat.

Of his time in the military, Schauble says, “I got to serve my nation in combat in a time of war and no matter what else I do with my life that experience is its own reward.”

He also credits the military to introducing him to his wife of 13 years, Melicia, who was a Marine combat engineer officer.

On pivotal moments in his life

Schauble points to actively leaving the special operations community after spending his whole life trying to get there as one of the most pivotal decisions of his life. “The decision really was a quality of life one –– a question of whether I wanted to stay married and have a family and be the husband and father that my family deserved,” he says. “I made the right decision and I have never looked back. Business was a natural fit once that decision was made.”

When transitioning into the business world, Schauble learned that leadership is about setting the example and that a good, unselfish team will outperform a collection of superstars every time.

“Everyone has something to contribute and the leader’s job is about finding what people are good at and giving them a role consistent with their strengths, not setting people up for failure by expecting things from them that they cannot deliver,” he says.

On his career after the military

After leaving the military, Schauble did not pursue any additional education. “It is arguably becoming less necessary to have an MBA in an executive role, especially in entrepreneurial situations, though I’m sure it helps in big companies/industries where pedigree matters,” he says.

Schauble attributes his business education to his first job after the military with Remington Arms. He was hired as project manager to execute the merger of Remington and Marlin Firearms, which at that time, was the largest acquisition of one firearms company by another in history.

The opportunity gave him a chance to work his way up to running the entire defense portfolio for a group of nine companies before becoming an executive with a tech startup.

“I learned everything I know about business from books, online resources, and other people,”

Schauble says. “On-the-job training has always been the best way for me to learn.”

“Work with people you like doing something you are good at and passionate about,” Schauble advises. “You will wind up spending more time at work in your adult life than with your family or friends, so it is important that you don't settle for a situation where you compromise any of these objectives.”

Schauble also recommends never just working for a good salary, rather seek out a job that combines passion and career stability and growth. “No one likes working with someone who is miserable or motivated by the wrong things.”