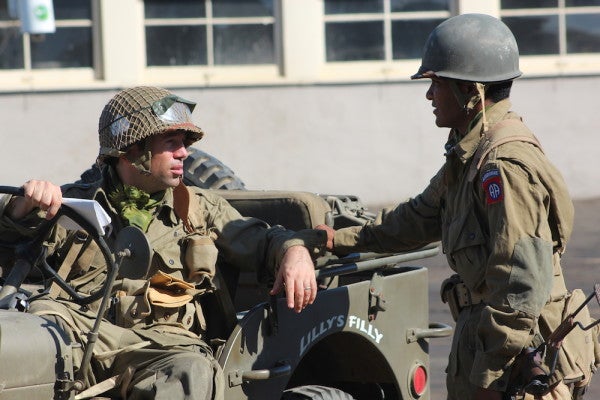 Jim Murphy, 42, has two passions: making things and telling stories. So, it is not very surprising that the Marine veteran now runs his own interactive content and game company called Citizen Content Group. Under Murphy’s direction, the company is about to launch its first brand called INVICTA Challenge, which he describes as “a boy’s version of American Girl.”

Murphy sat down with Task & Purpose to talk about his mission.

Time in the military.

Murphy joined the Marine Corps in 1994 and served as an infantry officer for seven years. He describes his decision to join the Corps as one of the pivotal of his life. The leadership development and training that Murphy learned in the military inspired him to create an interactive game brand to tackle the boys’ crisis and literacy issues in America.

Murphy initially thought that he wanted to be Jack Ryan, a former CIA operative who becomes U.S. president in the Tom Clancy books, and started down a path of earning his Ph.D. in national security studies while still active duty. However, after working in the Pentagon and on Capitol Hill, he realized that he would probably never be happy in that world, and changed direction to something more creative.

“Realizing that the government world was not for me, and having the courage to make a course correction was the biggest decision I have made professionally,” Murphy admits.

He decided to look into business programs and interviewed with University of Southern California while sitting in Kuwait, waiting for the war to start. Murphy was accepted in 2003 where he became a full-time student once returning from Iraq. Through his MBA program, Murphy took an internship with Mattel, which introduced him to the toy industry.

From there, Murphy gained 10 years of valuable experience in kids and family marketing, entertainment, and product development experience with major toy companies including Mattel, Activision-Blizzard and Spin Master. In 2014, he branched out on his own and launched his own company, Citizen Content Group.

Launching his own company.

It tells the true story of a Native American paratrooper on D-Day named Turner Turnbull. Intended for boys 8-14 years old, it is meant to tell true leadership stories and to get boys reading. The game allows boys to walk in the footsteps of exceptional military leaders through a choose-your-own adventure style experience that combines comics, games, and toys.

“We developed the comic art by hiring a group of World War II paratrooper reenactors,” Murphy says. “When one of them did not show up, I had to fill in myself, playing the role of Lt. Col. Ben Vandervoort.”

While starting his own company was not easy, Murphy says his job is rewarding and unique because it combines “business insights and practices with my own creativity.”

By figuring out what motivated him, he was able to establish a rewarding career that will also have an impact on the lives of kids around the country.

To service members just transitioning out of the military, Murphy says, “You should figure out what makes you happy and then find a way to do that every day professionally.”