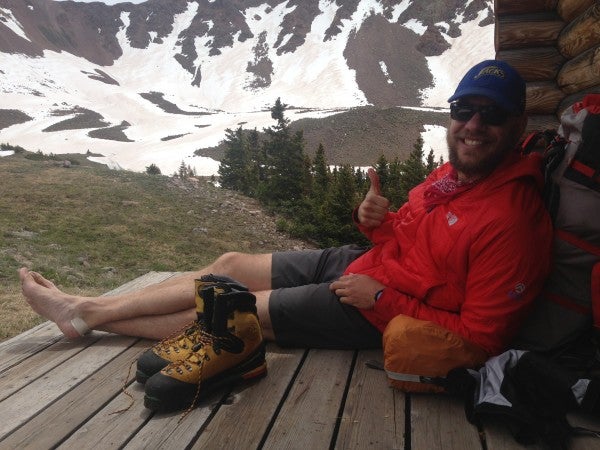 Stacy Bare is the director for Sierra Club Outdoors, an environmental organization that has been around since 1892 that gets 250,000 people outdoors nationwide each year through a network of 5,000 volunteer leaders and a small staff. One of Sierra Club’s main programs, Military Outdoors, run by Josh Brandon, provides service members, veterans, and their families opportunities, exposure and access to the great outdoors. The organization also offers a number of training events that are open to the public, from day hikes to mountaineering trips across the country. Bare participates and leads a number of these outings. In 2014, National Geographic named him “Adventurer of the Year.” He is also a brand ambassador for The North Face.

On getting an education in city planning

Bare left the military seven years ago after serving in the U.S. Army for over six years. He went to the University of Mississippi on an ROTC scholarship for his undergraduate degree, followed by a master’s degree in city planning from the University of Pennsylvania. In school, he learned to view design processes from multiple perspectives and different viewpoints, which now helps him ask the right questions when engaging with new communities.

“UPenn emphasized community engagement and a very critical design thought process,” Bare said. “[These elements] both have helped me ensure the programs we’re designing and delivering to support getting people outdoors are meeting critical needs, especially in the veteran and youth sectors.”

On working outdoors for a living

Bare said that as a child his family taught him the value of outdoorsmanship, however, a critical moment in his life occurred after graduate school. All through school, Bare admitted that he had a problem with cocaine and alcohol, and by 2009, he was very depressed. He moved out to Colorado where a friend convinced him rope up and get vertical for the first time.

From there, it was the result of a lot of hard work, lucky breaks and support from his family and friends that enabled Bare to pursue a life-long career helping people benefit from the outdoors.

Bare noted that there is no better place to learn the value and advantages of teamwork and leadership than in the Army. “I loved the men and women I served with and when I could break the mission down to each day’s tasks, it was great.”

He also said that regardless of rank, when service members go out to learn a new skill at a school like Airborne, regardless of rank, they are treated equally — everyone has to work hard to succeed. Further, “If you want to be an effective leader, you have to earn the respect of your team, you can’t just expect people to follow only on rank.”

His advice to transitioning service members

Bare advised that recognizing you’re new to the civilian world is important, just like when you were new to the military. “Seek out mentors in the veteran and civilian sector and don’t be afraid to spend a year or two as a ski bum or a dirt bag climber before deciding to take a step towards your career or education,” he said. “You’ve just come home from war, try and enjoy life and don’t be afraid to ask for help.”