JOB ENVY: From The Military To Emergency Management Planning Chief For FEMA 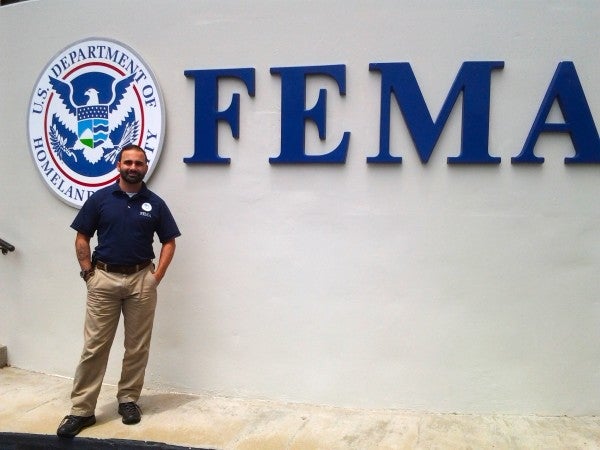 Shane ValVerde recently achieved a coveted position as an emergency management planning section chief in FEMA Region VI, which oversees Arkansas, Louisiana, New Mexico, Oklahoma, Texas and 68 federally recognized tribal nations. He moved with his family to Denton, Texas, and works out of the FEMA regional headquarters there. ValVerde is an unstoppable spirit, charged with caffeine, nicotine, and crystallized determination.

Path to the Military

ValVerde comes from a long line of service members and knew right from the beginning that he would follow in those dusty footprints. Bookended between an early enlistment into the Marine Corps at age 17 and an IED blast is a 12-year career spanning both the Marines and the Army Reserve. The final years of ValVerde’s military experience found him attached to 3rd Special Forces Group as a special operations civil affairs team leader in Afghanistan.

“It was while serving in Afghanistan that I would sharpen the skills that would later be applied in the civilian world as an emergency management specialist and [Incident Management Assistance Team] member,” said ValVerde.

As he recovered from his career-ending injuries, ValVerde, like many veterans, struggled with the prospect of living in the civilian world. “I felt I had no real qualification or experience,” he explained. However, he credits a battle buddy with helping him find direction and the idea to repurpose his military skills in a meaningful way in the civilian world.

Armed with his new direction, ValVerde began taking courses through FEMA and his state’s emergency management office in order to strengthen his military training and qualifications. Through a long road of reintegration and training, ValVerde said that his anxiety and culture shock was lessened by learning in an environment populated with first-responders and through the constant reassurance and camaraderie that he found while working with a veteran-focused nonprofit.

ValVerde also credits education as another key to his transition. “I started pursuing my bachelor’s degree in disaster and emergency management through the American Military University while also working on obtaining the Certified Emergency Manager credential,” he said. Given the lackluster transition assistance ValVerde said he received from the military, he was very impressed with the veterans’ services at American Military University. “They assisted me every step of the way and made the process fairly quick and painless,” he said.

While in school, ValVerde took a position as a situation unit leader on a FEMA type-III incident management team, which was an on-call position. After three years of school, extracurricular study, and thousands of volunteer hours, he became aware of the posting that would ultimately become his current position.

ValVerde said that the selection process for the planning section chief was “arduous, consisting of an online application where I was one of 3,000, a phone interview, a board interview, a written test / evaluation, a background screening, and a seemingly endless onslaught of federal forms to validate.” This process culminated in a two-day evaluation that vetted the remaining 200 applicants to fill eight positions around the country. On the application process, ValVerde said, “I made sure to highlight the relevant real world experience that I gained from my military service, which often times was directly related and equivalent to the position.”

ValVerde noted that he is always excited to work with the many veterans who also work with FEMA. According to him, “FEMA continues to expand its veteran recruiting efforts due to the agency’s recognition of the natural fit for disaster response and veterans.” He believes that “in the uncertainty and high stress of a disaster, veterans find themselves at an advantage over their civilian counterparts as we are not only trained to survive in this environment but thrive.”

Advice for the next generation of veterans

True to his military roots, ValVerde’s advice for the next generation of veterans begins with a clearly identified objective. “Figure out exactly what career field you want to be in down to the type of position and location, then get a plan to accomplish it,” he said.

He went on: “Never lose sight of the objective and never quit. It is not easy but persistence will pay off. Reach out to other veterans that are in your desired occupation and find a mentor, someone that can assist you with navigating the waters of getting into your new field. Find a way to identify the direct relation between your military service and your new career and be able to articulate it.”