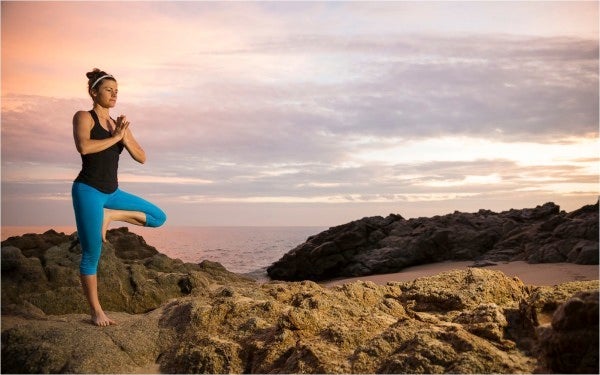 Sarah Plummer is on a roll. The 33-year-old founder of SEMPERSarah.com, a wellness mentoring brand, keeps a busy schedule of international travel, speaking, coaching, writing, and teaching. Her powerful drive to help people transition from trauma has not gone unnoticed. From Katie Couric’s talk show, to “NBC Nightly News” with Brian Williams, to one-on-one and group coaching sessions, Plummer is advancing her mission to teach resiliency to those who need it most.

Plummer, a University of Virginia graduate, left active duty five years ago after serving as a U.S. Marine intelligence officer for seven years. Her military service, which included two deployments to Iraq and several years as a military Olympian, equipped her well for the work she does today.

“People are hungry for guidance, leadership, and role models as they work to transition from miserable situations to being happy and healthy,” said Plummer. “My goal is to reach people who might feel isolated by their trauma, to connect with them through my own story, and to equip them with tools for wellness.”

On her most pivotal experiences while serving

Plummer’s first pivotal military moment came during her final years at the University of Virginia when she switched from Air Force ROTC to Marine ROTC.

“I went against the advice of almost everyone in my life to make that switch,” said Plummer. “As a young adult, tapping into my intuitive wisdom for the first time was really powerful. Even though the Marine Corps contained some of my toughest challenges, and even when the proverbial shit hit the fan, I was able to accept it all because I had chosen that path.”

A second critical moment occurred when Plummer was raped by a close friend just before receiving her commission. The event called into question everything Plummer thought she knew about military camaraderie, her goals, and her future.

Still, Plummer pressed forward and accepted her commission. She also sought counseling. The move — despite assurances to the contrary — was penalized with a medical disqualification for flight school, and she was reclassified as an intelligence officer.

Though Plummer was initially frustrated and disillusioned by the move, the transfer into the intel field turned out to be a good fit.

Plummer’s current focus on teaching resilience to veterans and civilians alike is heavily informed by her years of experience in the intelligence field.

“Today, my technical skillset is about health and wellness, but it still falls under the larger umbrella of understanding people,” Plummer said. “The more perspectives you have on the human condition the better.”

Plummer’s first months as a newly commissioned second lieutenant represent a series of particularly intimidating moments. Still, she credits those early experiences of feeling scared but doing the work anyway with her ability to be bold in business today.

“As an entrepreneur, you have a lot of moments when you feel fear,” Plummer said. “But you have to move through it.”

Since leaving active duty in 2009, Plummer has had ample opportunity to flex her mentorship, leadership, and self-discipline muscles.

“Being a motivated person is, in some ways, almost harder outside the military,” she said. “You don’t have that structure anymore. But you do have a type of muscle memory — a certain temperament that’s been developed, and I rely on those key elements to operate effectively.”

“Approach your transition from a place of curiosity rather than fear,” Plummer advises. “Don’t focus on what you’re giving up, but on the new journey you’re about to embark upon.”

The myriad resources available to transitioning veterans — from free yoga classes to professional development opportunities to entrepreneurial support — should be met with a sense of openness, flexibility, and gratitude, says Plummer.

“It’s interesting how it can all come together,” she said. “You can adapt what worked in the military to a new environment — you don’t have to recreate the wheel. I mean, I turned ‘SEMPER’ into an acronym that works in the private sector!”

Lydia Davey is an entrepreneur and U.S. Marine veteran. She is the founder of Moriah Creatives Public Relations.