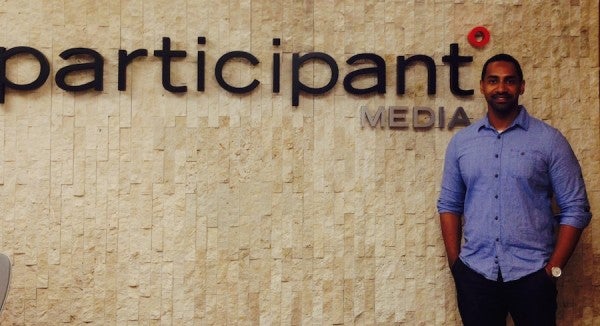 Many of the veterans we feature in our weekly Job Envy series advise veterans to found success after discovering something they were passionate about and going after it. California-native Seth Smith is no exception.

The 32-year-old Navy veteran works in Los Angeles on political and social action campaigns for Participant Media, a company whose focus is on “feature film, television, publishing and digital content that inspires social change.” As manager of film campaigns and programming, Smith oversees the social action campaigns around film releases so when an audience member is inspired to action by one of the company’s films, there is a structure is in place for that action to carried out.

Smith enlisted in the U.S. Navy in 2002, and describes his service as “outside the norm.” He served as a cryptologic technician and was stationed in the Persian Gulf for more than four years, living off base in apartments and homes, traveling significantly throughout the region, embedding with coalition units, and working on over a dozen different military ships.

“My experience was pivotal to my development as a citizen of the U.S. and as a global citizen,” says Smith. It gave him the discipline and direction he was looking for when he joined, expanding his understanding of his own physical, mental, and emotional limits.

His education after the military

When he was preparing to separate from the Navy, Smith told his dad that he wanted to apply to University of California Los Angeles, the same university that his parents and sister attended. However, his father insisted that he start at Santa Monica College, a two-year, public community college where Smith could decide what he wanted to study while taking a variety of course without using up all of his GI Bill benefits. It was at Santa Monica that Smith was introduced to Linda Sinclair, a veterans advisor.

“She took me by the hand, both literally and figuratively, and in one day, had me convinced that if higher education was the next goal I wanted to pursue, she would be there to help me along the way and had no doubt I would find success,” says Smith. He was discharged six months later and started classes that June.

After two years at Santa Monica, Smith started his bachelor’s at UCLA, which he graduated from in 2011 with a degree in political science. He then went on to complete a master’s degree from Princeton University’s Woodrow Wilson School of International and Public Affairs.

Finding his passion in media campaigns

While Smith’s education focused on political science, he quickly found that he was passionate about media and how it can impact social action, particularly veterans causes. He joined a group of veterans a few years ago who together produced the YouTube video “Shit Civilians Say to Veterans,” which has garnered more than 600,000 views.

“Media is a powerful tool for affecting change. Positively, it can raise awareness and inspire action; negatively, it can reinforce stereotypes and oversimplify complex issues,” explains Smith. This is a line that his company, Participant Media, walks effectively. While he has only worked at Participate for one month, Smith already finds the work incredibly rewarding.

“Our films cover a wide range of topics so that means every social action campaign is focused on a different issue and involves connecting with different partners. … with the same broader goal of having a positive impact on our communities, our nation and the world,” he says.

Participant Media recently launched a campaign to celebrate service members throughout the country called “Return The Service.” Its objective is to share “Millennial veterans’ perspectives and experiences through inspiring stories of trial and achievement.”

His advice for transitioning service members

For service members who are preparing to separate from the military, or who have recently separated, Smith advises that you set goals for yourself and find a community of support.

“Whether it’s fellow veterans, family, old friends, a spouse or significant other, a gym. Any of these will suffice.” Not just for them to support you, but for you to support them and maintain the feeling of being part of something larger than yourself.”