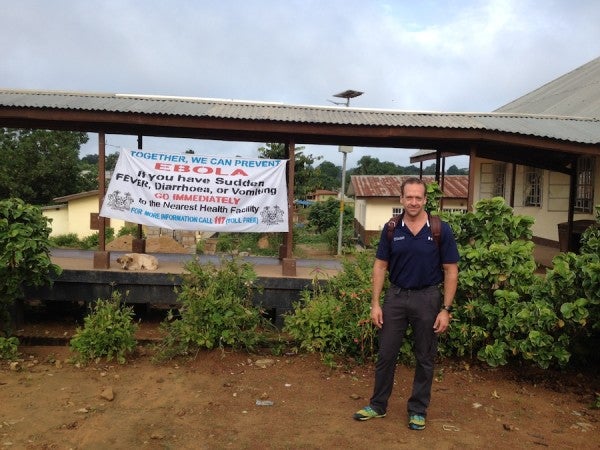 When people think of disease outbreaks, most don’t typically consider heading straight for them. But that’s exactly what 40-year-old Greg Raczniak does.

After serving in the Navy for more than seven years and then transferring to the U.S. Public Health Service in 2011, the Michigan native now works as a preventive medicine resident with the Center for Disease Control and Prevention as a disease detective, working on outbreak response and preventing the spread of infectious diseases.

In the last three years, Raczniak has participated in outbreak responses for Rocky Spotted Mountain Fever in Arizona, deployed to Northern Kenya during a devastating famine to evaluate the pediatric feeding scheme for the World Food Program, and studied steam bathing in remote Alaskan communities to prevent skin and soft tissue infections.

Greg teaching census employees during the Horn of Africa famine in Kenya, 2011.

Most recently, Raczniak’s work took him to Sierra Leone with the CDC’s Ebola response team, where he collected information on cases and worked to improve efforts for contact tracing — tracking down and monitoring individuals who have come in contact with persons displaying symptoms. Most of the deaths in the Ebola outbreak have occurred in Guinea, Liberia, and Sierra Leone, and contact tracing is the key to stopping the outbreak and saving lives.

What he took from his time in the military

Raczniak believes that the accountability and responsibility the Navy bestowed on him early on in his career prepared him for his current role. Taking those opportunities by the horns, coupled with senior mentorship, strengthened his leadership ability.

“There are parallels to good military planning and good public health planning,” Raczniak says. “It is important for both types of practitioners to identify issues, gather intelligence, determine objectives, decide on tactics and strategy, and ultimately execute the plan with recognition of the chaos that accompanies changing situations, all while adjusting accordingly.”

On obtaining his degrees

After completing a liberal arts bachelor’s degree at Kalamazoo College in Michigan, Raczniak pursued medicine at Eastern Virginia Medical School, as well as a molecular biophysics and biochemistry Ph.D. program at Yale University. Then, he entered an internship program at the Naval Medical Center in San Diego, followed by a tour at the Navy’s research station in Ghana. During this time, Raczniak obtained certification in tropical disease and traveler’s health, and decided to complete training in undersea and submarine medicine.

While Raczniak describes his academic trajectory as “peripatetic” (we think he learned this word while getting his Ph.D.), he explains that every facet of his education is used in his current position: “My medical education helps me understand disease, my graduate education has made me a better scientist, and my preventive medicine training has helped me identify and respond to public health threats.”

A 2013 Tillman Military Scholar, Raczniak is currently completing a master’s in public health at Tulane University as part of his medical residency in preventive medicine.

Raczniak points out that every position or educational experience has contributed to his career. He didn’t set out with a life goal of becoming a disease detective for the CDC, but a series of professional experiences led him to his current position, working on the Ebola outbreak in Sierra Leone — one of the most profoundly affected countries, tallying nearly 600 of the 2,800 recorded deaths to date.

Raczniak says that the sense of purpose instilled by the military is a critical notion many veterans carry for the rest of their lives.

“I experience fulfillment through service. I feel that veterans are always driven to serve others; the trick is to find an organization like the CDC that provides the opportunities to continue this selfless service.”