Job Envy: From Petraeus Staff Officer To CEO And Founder Of A Communications Firm 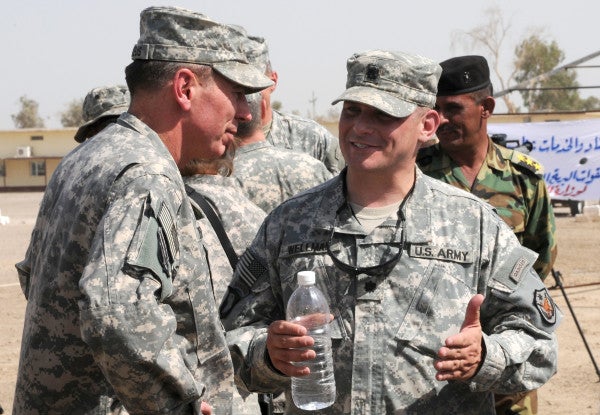 Nearly five years ago, Army veteran Fred Wellman ended a 22-year-long career in uniform, one that started as an aviator and featured roles with some of the Army’s biggest names, and launched ScoutComms Inc., a communications and corporate social responsibility firm.

Wellman spoke with Task & Purpose about his remarkable career that started in the classrooms of West Point and is far from over.

ScoutComms, Wellman’s company, supports veterans and military families “through communications grounded initiatives and collaborative partnerships that lead to greater awareness of their needs and expanded access to resources promoting their economic, physical, and social well-being.”

He spoke with T&P; about what drew him to military service, the impact of 9/11, his career trajectory, and his advice for newly-transitioned veterans.

Wellman said he always wanted to be a soldier.

“I had dreamed of the military from a young age looking at my father’s carefully stored WWII Marine uniform in the basement,” he said. “The military gave me the opportunity to be a fly on the wall at some incredibly historic moments in our nation’s history and to see the world in ways I never possibly dreamed I would.

Upon graduation from West Point, he became an aviator and spent much of his career in “attack helicopter focused positions.”

Then, during the initial invasion of Iraq, Wellman found himself conducting a civil affairs operations in Ninewa province. “In that role I reached out to friends at home to send over supplies for the schools and clinic we were building,” Wellman said. That endeavor found him on television quite a bit and led the commander of the 101st Airborne, a two-star general named David Petraeus, to ask him to become the public affairs officer for the 101st upon the unit’s return to Fort Campbell, Kentucky.

Wellman would spend the rest of his career serving with Petraeus, Gen. Martin Dempsey, and others at Multi-National Security Transition Command-Iraq and at Defense Media Activity in Washington D.C.

On the role 9/11 played in his military service

Wellman described 9/11 as “probably the most significant” experience in his life. On Sept. 11, 2001, Wellman was an officer in the Army Reserves, running for mayor of Peachtree, Georgia.

“The next day I was mobilized and never took off the uniform until 2010,” he said. “That return to the Regular Army after a two year Reserve stint sent me to the 101st Airborne where I eventually ended up moving to public affairs and my current career in public relations and advocacy.”

On what he learned in the military

Wellman cautioned that it’s difficult to pick just a few after 22 years in service. But he noted the importance of passion was a distinctive lesson. During his time as a public affairs officer, Wellman said he learned that “passion counts and that it’s okay to disagree sometimes, come to a consensus and then move out with the plan,” Wellman said. “I believe that if you are serious about doing something you might get mad sometimes. I want to work with people who are passionate enough to show some emotion sometimes.”

His advice for newly-transitioned veterans

“Networking is as or even more important than job boards and online applications,” Wellman said. “Spend your time building relationships and deciding what you want to do when you grow up. Most jobs aren’t ever posted.”

Wellman’s other advice centered around making yourself as dynamic a job applicant as possible and preparing for your next career while you’re still in the service.

He also said to take advantage of the services that exist that help veterans find jobs and great careers.

“There are literally thousands of people dying to help veterans find work right now and you only have yourself to blame if you aren’t leveraging those opportunities,” he said.