Editor’s Note: The following story highlights a veteran who works at Kellogg Company. Committed to filling its ranks with talented... 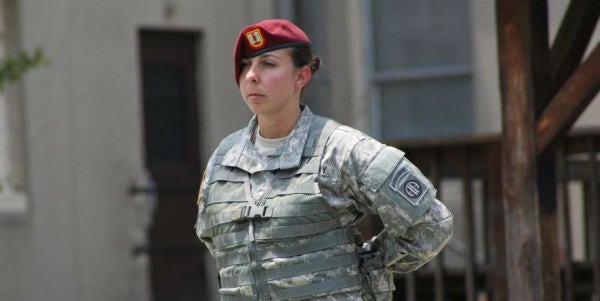 Editor’s Note: The following story highlights a veteran who works at Kellogg Company. Committed to filling its ranks with talented members of the military community, Kellogg Company is a Hirepurpose client. Learn more here.

While most people know Kellogg Company as the makers of their favorite breakfast cereals, in the military community, the company is known for its dedication to hiring veterans and helping them thrive. Through a conscientious effort to recruit members of the military community to their team and resources like the K Vets group within the company, Kellogg has shown that they want to do more for veterans than thank them for their service.

Morgan Dennis, 36, is an example of what veterans can accomplish with Kellogg. The U.S. Army veteran joined the company two years ago, after completing a decade of service in the military. Now, as the senior manager of workplace solutions for Kellogg, she’s found a position that allows her to utilize a number of the skills she picked up as a logistics officer in the Army for a company that offers the kind of camaraderie that so many veterans seek when entering the civilian workforce.

Army veteran Morgan Dennis is an example of what vets can accomplish with Kellogg.Courtesy photo

When Dennis was gearing up to transition out of the Army in 2015, she immediately started her job search. “I started looking at job boards and applying for jobs in January when I knew I wasn’t getting out until August, and then around February, March, I increased my efforts,” she told Hirepurpose.

Prior to joining the Army, Dennis had gone to college and earned a degree in elementary education. She even taught for a few years before enlisting. But after 10 years in the Army, and with a slew of new skills under her belt, she wasn’t looking to go back to teaching — but she also wasn’t quite sure what she wanted to do. So she applied for every job she thought she might be qualified for. “I figured I’d let them tell me no,” she said. “I wasn’t going to limit myself.”

When she saw the job at Kellogg on the Hirepurpose job board, she knew she had to throw her hat into the ring. “I knew that if they were using Hirepurpose, they were looking for veterans,” she said. Within a couple of months, she was hired and ready to start her re-entry into the civilian workforce.

But transitioning wasn’t the easiest thing, even with such a soft landing-pad setup. Though she’d already worked in the civilian world, she’d been away for a decade and a lot had changed. Add to that the fact that she was starting in the IT field, which was an entirely new situation, and Dennis had quite a few adjustments to make. To help with the big shift, she started by joining the Army Reserve. “The Reserves helped because I still get to put on the uniform once a month and I still get to interact with soldiers,” Dennis said. “I get to do all the things I loved to do in the military, but now I get to do it all in one place instead of moving every couple of years.”

Getting comfortable in a totally new work environment took some time, too. Luckily, Dennis found that the team at Kellogg was happy to help her get over any bumps that got in her way. “I love that my manager at Kellogg didn’t expect me to have all of the schooling or corporate experience,” she said. “They valued my experience in the military enough to push for me in an IT management role.”

“I’m lucky that I had a talent acquisitions representative and hiring manager and the IT team were able to look past the fact that I had little hands-on IT experience, aside from managing IT teams, and see that having goals and being able to make a team meet those goals was more important than knowing the IT terminology,” she added. “And two years later, I know that terminology and I can talk the talk and do my job at an even higher level.”

The thing that really helped convince Kellogg that she was the right person for the job, even without prior corporate experience, was her leadership while in the military. Leading a team as a logistics officer and having the organization and goal-oriented focus necessary for that role were skills that easily transitioned from the military to the private sector. Knowing how to work with people and motivate them can often be difficult to teach, she said, while learning the ins and outs of the IT field was a little more cut and dry.

For Dennis, part of showing that she was the best fit for the new role meant being vulnerable and speaking up when she didn’t know what she was doing or when she felt out of her depth. “The biggest fear I had was that I was going to have people working for me who knew more than me and would look at me and think, ‘You don’t know anything,’” she admitted. “So I didn’t try to hide that. I came in and said, ‘I need you to talk to me like I don’t know anything about IT. I’m looking to you for your expertise’ … I didn’t hide it from anyone. I’d always say, ‘I don’t understand, can you help me,’ and within six months to a year, I could hold my own. It wasn’t a hurdle that I let hold me back.”

And finding a company that values veterans and supports them the way Kellogg has helped Dennis isn’t impossible, either. She recommends applying for a few jobs a day and using resources like Hirepurpose to find companies that will know the advantages of hiring a veteran.

“Veterans are valuable to any organization or company,” she said. “We come with precision, drive, and resiliency. Not only are we good at being members of a team, but we are also natural leaders. Veterans have a never-quit mentality, and they have a knack for tackling what appear to be unsolvable problems,” she added. “They are a great addition to any team.”