Editor’s Note: The following story highlights a veteran at PetSmart. Committed to including talented members of the military community in... 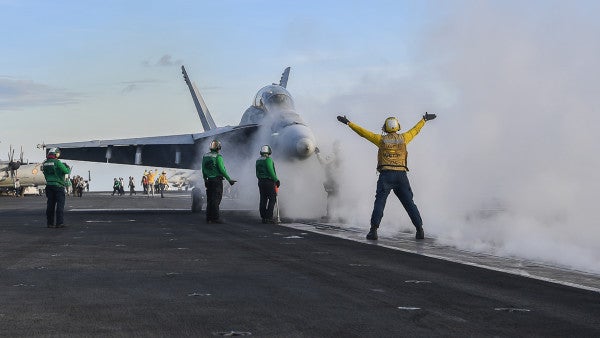 Editor’s Note: The following story highlights a veteran at PetSmart. Committed to including talented members of the military community in its workplace, PetSmart is a client of Hirepurpose, a Task & Purpose sister company. Learn more here.

When Jose Urquizo retired from the Navy after 20 years of service, he initially expected to follow a well-worn career path: defense contracting. But after updating his resume to translate military experience into civilian terms, he discovered new possibilities that led him to a facilities maintenance management position with PetSmart. We interviewed Urquizo to learn more about his job search.

What skills and experience from your military career did you think would be most important in your job search?

I thought I would use my secret security clearance to stay within defense contracting. I knew I had both technical and management skills.

At what point did you realize you had other options besides being a defense contractor?

One thing that opened my eyes… was the resume building process and the interview process. I took formal classes on resume writing, worked on my resume for six months and kind of obsessed over it. That opened up a lot of doors into the civilian sector, based on my skill set, so I didn’t have to limit my search to contractor companies. I knew my resume was just right when I had non-stop interviews.

Give us an example of some ways you described your military experience on your resume:

To explain it in a resume is challenging. A chief petty officer is “middle management,” handling multiple projects and contractors. Recruiting is “HR experience.” Don’t use Navy or military talk.

So what were the skills and experience on that resume that helped you to secure your current position?

I have a combination of leadership, technical, team building, training, project management, and budget management skills.

Once you had that resume down, what was the actual job search process like?

It was a six-month window of searching. The first few months were slow, but then it picked up. I liked the way the interview went. I had opportunities, but [PetSmart] won out because I felt like they needed me and they wanted me, and the general manager was unrelenting in pursuing me.

I was worried about the economy in 2007, but he pointed out that the pet industry is recession-proof, because people will always care for their pets. That was a deciding factor. Plus, I had always been attracted to the company as a pet parent myself.

You were able to earn a degree after leaving the military. Did you use the GI Bill? How did you balance classes with your job requirements?

Yes, I did earn my BAS in Management in 2012 while working for PetSmart Inc. I used my GI Bill benefits to do so. I always wanted to earn the degree because I had earned the benefits by sacrificing life and limb, so I wanted to take advantage of them. I was the only manager in the building that didn’t have a degree. I didn’t want to be the only one. I already had the technical skills, but I wanted to be well-rounded. I need to broaden my horizon and learn the other side of the business.

Time management was tough, because I was a full-time student and a full-time employee. It was tough to go to class twice a week after work until 9:30 pm, but very manageable. The first 4-5 months were tough, until I got into a good routine and regimen. After that it was easier. I got mostly A’s and B’s, not a single C. I made Dean’s list every semester! I loved learning about why payroll is this way and the laws are that way and why HR makes certain decisions.

Was there anything you needed to un-learn or learn for the first time because of your military background?

The biggest challenge initially was the language barrier—the terminology used in staff meetings, the vernacular of the supply chain. There are acronyms that I had to adapt to and learn. I needed to be technical, but also administratively sound. You have to have the soft skills. I had both skill sets, so I could solve complex problems and communicate to people in plain English and write effectively.

Why would you recommend PetSmart to other military candidates?

PetSmart is a perfect fit because everything they do is team-versed, which is how we worked in the Navy. Cooperation, coordination, communication has always been there. It has been a great company to work for. In the military, I was in a very up-tempo pace. If you transition to a job that is not go-go-go, it may be a difficult transition. But my job has constant deadlines and a 24/7 tempo that is familiar and comfortable. This is something I realized in hindsight that has challenged me in a fulfilling way.

What advice would you give to military veterans transitioning into civilian jobs?

I think preparation is key. You can’t wait for the last minute to prepare for a job. There has to be a point before you transition, minimum 6-9 months prior to getting out of the military. Start working on a good resume. It’s hard to do because you’re still active duty, but you have to manage that effectively.

One error that many veterans make is that in the military you are given a great deal of authority and responsibility. When you transition into the civilian world, you have less of that from a monetary or headcount perspective. My role in PetSmart is smaller than what I was in charge of in the Navy. That is hard for some people to deal with. It was easy for me because I felt like my skills were a perfect match. This is what I’m paid to do and I’m good at it and I’m going to do my best.

Finally, what motto would you share with other veterans?

The Navy is not who I was. It’s what I did for a living, but it didn’t define me as a person.