Chris Taylor stared at the limp body of a newborn baby. It was 2006, and he was in East Africa... 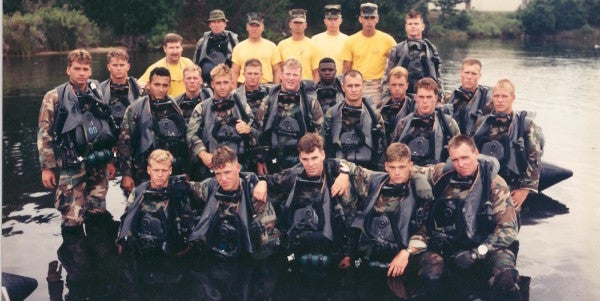 Chris Taylor stared at the limp body of a newborn baby. It was 2006, and he was in East Africa visiting a Darfur refugee camp. A young woman, too malnourished to breastfeed, was watching her own child die in her arms. “We immediately took her to our tent where we had Enfamil,” Taylor told me in an email, “We spent an hour teaching her how to feed her baby with the bottles.” Amazingly, the baby recovered almost immediately.

Taylor did what he could in a tough situation. “She refused to fly back to Nairobi with us so we gave her a 45-day supply and promised more before that ran out. Watching that child regain life in front of us was life-changing for me.”

That was just one intense day out of many for the former enlisted Marine. Taylor, 50, now lives in Northern Virginia and works for DynCorp International as the senior vice president for strategy and advanced programs. Taylor spoke with Task & Purpose how his time in the Marine Corps prepared him for a life committed to national security.

Chris Taylor pictured at a Darfur refugee camp in 2006.

Taylor’s 14-year career in the Marines ended in 1999, but he continued to serve in a variety of environments. With each career shift he traded up, building a strong professional track record.

Taylor has been the CEO of a multimillion-dollar defense contracting company and also founded his own tech startup. He was selected as one of America’s most influential veterans in 2014 when he convinced ABC’s “Shark Tank” and the White House to collaborate on an all-veteran episode. Taylor’s tenacity in and out of uniform has been the critical ingredient to a life lived on his own terms.

Taylor immediately pushed hard after enlisting, trying out for Marine Reconnaissance. “One of my best days in the military was passing the Indoctrination Test for 2nd Force Reconnaissance Company,” he told Task & Purpose. Determined or just stubborn, he refused to give up during the grueling experience. “Of 17 Marines, only two of us passed. I trained for six months to make it to that day.”

After seven years of service, things quickly took a nosedive when Taylor was denied reenlistment. “This was during the Reduction in Force in 1992–93,” Taylor said. “They were cutting guys left and right. I couldn’t get any traction with the bureaucracy.”

Not being a Marine wasn’t an option. Taylor — who was twice selected for meritorious promotion, was the distinguished honor graduate at NCO Leadership School, and rated the number one sergeant in his unit — wanted to remain a Marine. “I wrote a long letter to the Sergeant Major of the Marine Corps, Harold Overstreet, and FedEx’ed it to his office saying I would be there the next morning to discuss. At 0400 the next morning, dressed in my Alphas, I drove from Camp Lejeune to Washington Navy Yard.”

Overstreet and Taylor had a long discussion about the Marine Corps, what it meant to be a Marine, and how Taylor could continue to serve. Overstreet told him to go back to Camp Lejeune. His authorization to re-enlist was already at his unit by the time he returned home that night.

Taylor loved the Corps but didn’t stop at training himself or his Marines. He worked hard at his education, using every possible benefit to pursue college, first as part of a force recon team deployed on the USS Kearsarge, and then at St. Leo University on Little Creek Naval Base when he became an instructor at the Amphibious Reconnaissance School. Taylor was relentless. “I once came off six days of patrols with students at 7 am, went to my car still cammied up, and sat for an 8 am final. My classmates weren’t too happy about that. I was really, really ripe. I’ve taken finals on a C-130. You have to commit to getting your education.”

After getting out of the Corps, Taylor continued that education. He immediately went to the College of William and Mary for his MBA. After several years of work, he then attended Harvard’s John F. Kennedy School of Government, earning a master’s of public administration.

Taylor’s resolve was on full display during his educational journey. In fact, it helped fund him through graduate school. “I used every education benefit I could, everywhere I could,” he wrote in an email. “While still on active duty, I maxed out my tuition assistance and PELL Grants. As a graduate student I wasn't eligible for the GI Bill, but there were other options. I checked out each of them, and where appropriate, used them. I also tended bar at night just to keep a little cash in my pocket.”

Money and time are the key resources in each veteran’s education. “Use every dollar to sort out what you want to do with your life. If you already have a life mission, use every dollar to prepare yourself for it. Whatever you choose, learn new tools to think differently and apply everything you learned in uniform.”

While education was important, continuing to work in national security was critical for Taylor. “It straddles service and business, making it a very rewarding experience. Starting at a defense contractor can help veterans prepare for new opportunities elsewhere.”

For Taylor, the military was a great foundation. “It was a defining part of my life, but it doesn’t completely define who I am. Veterans need to leave space for new endeavors and find their own paths after service that leverage everything they’ve learned. The goal is to drive value for yourself and whatever organization you join after your service.”

There is nothing quite like serving in the military. You get the see amazing parts of humanity. Taylor’s visit to the Darfur refugee camp ended with a fitting story.

“As we taxied down the runway in our AN-28 we hit a soft spot in the dirt, and our nose wheel was buried. Once the refugees saw what happened, about 200 of them came to our rescue. They dug us out and pushed the plane to the end of the runway so we could take off, singing songs the whole time.”