Scott Marasco's experiences deepened his passion for working with people, and he began in earnest what would become a multidecade career in retail management, ultimately leading him to Lowe’s 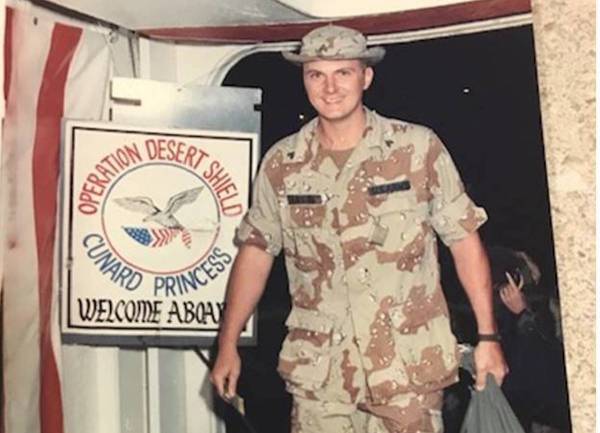 Editor’s Note: The following story highlights a veteran at Lowe’s which is committed to including talented members of the military community in its workplace. Lowe’s is a client of Hirepurpose, a Task & Purpose sister company. Learn More.

In October 1990, Army Reservist Scott Marasco’s senior year of college was interrupted by the news that he had been activated and would be serving in Operation Desert Shield/Desert Storm. He said goodbye to his young child and pregnant wife, and boarded a flight for Saudi Arabia, where he would spend the next seven months transporting essential supplies to troops across the Middle East.

“We carried anything from, say, potable water to food, maintenance and medical supplies. Believe it or not, we actually hauled enemy combatants at one point during the war,” says Marasco, who served as a motor transport operator. “I had to learn how to be disciplined because I was one member of a team of people, and everybody else on that team was counting on me to do my job.”

Marasco says this sense of teamwork and discipline stayed with him when he returned home to meet his new baby and finish his bachelor’s in business administration. His experiences deepened his passion for working with people, and he began in earnest what would become a multidecade career in retail management, ultimately leading him to Lowe’s.

Leading at home and on the 'battlefield'

Today, Master Sgt. Marasco is still in the Army Reserve and just celebrated 35 years of service. He now serves as an observer controller trainer, teaching battlefield survival skills to combat personnel of all branches in an annual training exercise. The training takes place over several weeks in an arid section of California that mimics the Middle East’s environment.

In his civilian life, Marasco uses the skills he has developed in the Army to lead merchandising teams at a dozen Lowe’s stores in Nebraska, South Dakota, and Iowa as a district merchandising service manager.

“It's been, quite frankly, a very easy transition for me, just because of the individual skill sets that I've learned in terms of managing people, and time management. It's truly been a perfect fit for me,” said Marasco.

Marasco’s team keeps the shelves at Lowe’s stocked with relevant products displayed in a visually appealing and easy to browse manner. He notes that the work is rewarding in itself, but that Lowe’s’ support of military employees and customers also “really motivates you to come to work every day to support the big goal of the company and be part of a team that truly appreciates people.”

Marasco remembers receiving an inspiring piece of mail while serving in the Gulf War.

“Still to this day, I have a card that I personally received from a grandmother, back in 1991 out of Omaha, Nebraska. It said on the outside of the envelope, ‘To any grandson from the state of Nebraska’ and I was born and raised in Nebraska, so it was an immediate connection when I saw that.”

Although it had happened 28 years ago, this incident came to mind immediately when Marasco was asked to lead Lowe’s partnership with a local American Legion chapter to send Christmas cards to service members overseas. Marasco set up a public card-signing event and brought the 1,500 cards Lowe’s had purchased. But it quickly became apparent that the community’s enthusiasm for the project was far greater than Marasco or the American Legion had anticipated.

“Once I started seeing how many people were showing up, we were scrambling! We had to go get more cards, about 2,000 of them … in a matter of hours!” recounts Marasco. “We ended up sending3,500 cards that we had collected from the community. That's pretty powerful, because I have been one of those soldiers.”

Marasco says Lowe’s plans to partner with the American Legion to send holiday cards again this fall, and that his personal goal is to send 10,000 cards.

The card signing event is one of many examples Marasco points to of Lowe’s following through on its commitment to support military service members, which it calls H.O.M.E. — Honor Our Military Every Day. Military associates wear camouflage vests on the sales floor to symbolize their service, and Lowe’s partners with organizations like the USO and Operation Finally Home, which builds and repairs homes for injured and ill veterans and their survivors.

“One of our stores in Omaha went in with a team of Lowe's associates and refurbished flooring, walls and ceilings for this family, and this was a disabled veteran,” Marasco recalls. “Not only did Lowe's donate and pay for the product but we provided the labor. And these associates volunteered on their own time to make a difference.”

Lowe’s has also partnered with AMVETS to sponsor “Generation T” trade school scholarships, and entrepreneurial grants for veterans, active duty service members and military spouses. Lowe’s has also taken the Hiring Our Heroes pledge to hire 100,000 service members, and partners with the Military Spouse Employment Partnership, Hirepurpose, the USO, G.I. Jobs and the Service Academy Career Conference to work towards that goal. Lowe’s currently employs nearly 20,000 current or former service members and has earned the DOD’s Freedom Award for hiring and supporting National Guardsmen and reservists.

“There is nothing but 100 percent full support in me being able to do my military mission, come right back where I left off, and just keep trucking forward. And I couldn't, frankly, ask Lowe's as a company to do anything more for me,” said Marasco. “I personally and professionally feel Lowe's is a great transition point for someone exiting the U.S. military. We're going to teach them … specific Lowe's business acumen, but the core skills of being a successful employee and/or leader within Lowe's already exists.

Marasco plans to continue balancing his career at Lowe’s with his military service. He plans to re-enlist in the fall and hopes to retire as a sergeant major after 42 years of service.