The value of service: pursuing career success at McKesson

Despite coming from different backgrounds and having varied goals, military veterans find career success with nationwide health services company McKesson that recognizes and values the unique talents they bring to the table 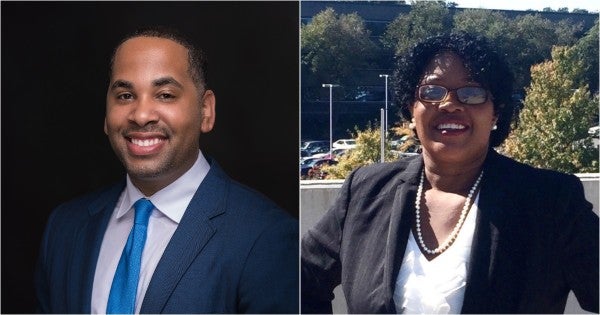 Renee Saxton and Tylen Hazard gravitated to the McKesson Corporation for different reasons. Saxton was pursued by a company recruiter; Hazard applied for numerous jobs just to get his foot in the door. Despite coming from different backgrounds and having varied goals, both military veterans have found career success with this nationwide health services company that recognizes and values the unique talents they bring to the table.

Saxton was in her second year of college when a recruiter contacted her about joining the Marine Corps. Looking for supplemental income, she was swayed by the signing bonus and the promise of a steady income. Not intending to settle in, Saxton quickly found herself immersed in the military life. “It consumes you,” she explained. “The people you serve with become your family.” Saxton enjoyed the tight-knit community of diverse people. Diversity was important in 1985; the Marine Corps was just starting to allow women to serve in combat roles. “Before that, women could only serve in admin roles,” said Saxton. “I was one of the first two females allowed on the front lines.” Serving in the front-line supply chain, Saxton was making history. “Somebody had to be the first,” she laughed. “I guess it was me.”

After the military, Saxton’s career led to work in customer service and marketing in the medical field. She was learning new skills and growing within her arena. However, when a recruiter from McKesson reached out to her, she was intrigued. “The recruiter told me how many more opportunities I would have with a company like McKesson,” Saxton said. Saxton was so interested in a career with McKesson that she accepted an entry-level position to get started. “Good opportunities don’t come along every day,” she explained. Saxton graduates this fall from the University of Richmond with a B.A. in Liberal Arts and plans on graduate school next. Beginning her career in customer service role has enabled her to move upward within the company. Now operating as a Senior Analyst of Strategic Sourcing for McKesson, Saxton says this has been her most rewarding role yet and looks forward to continuing her career growth.

McKesson is a standout employer for veterans beyond its McKesson Military Resource Group (MMRG), the company’s veteran and military spouse-focused employee resource group (ERG). “There is always something new to learn,” Saxton said. “People are very collaborative and are willing to share their diverse knowledge with others.” For Hazard, the biggest benefit is the company culture. “Not only does McKesson have multiple levels of management, providing numerous opportunities for growth, but there is a direct connection between upper management and employees.” That connection has helped Hazard build strong relationships with others in the company, fostering his sense of belonging and company pride.

Hazard comes from a military family and was always interested in service but wasn’t sure what that would look like. After graduating from college in 2008, with no firm plans for the future, he decided to enlist in the Army. Hazard began his career as a Supply Specialist and was quickly sent into combat. “With only a few weeks of training, I found myself on the ground in Iraq,” he shared. “It was intense.” Hazard successfully navigated his first deployment and his career flourished; he moved up the ranks and gained recognition and responsibility along the way. In 2013, while on deployment, Hazard sustained injuries that led to a medical retirement. Just like that, it was time for Hazard to start his next chapter.

When Hazard retired from military service, he had a plan. After returning to Richmond, Virginia, he worked with a program for injured soldiers that helped him prepare for a civilian career. Hazard worked as a civilian for the Army for a few years, gaining valuable experience. “I had a great job,” he shared, “but I wanted to see what else was out there.” Hazard started researching the best companies in the area. “McKesson repeatedly came up in my searches,” he shared.

Having narrowed in on McKesson, Hazard had one hurdle. “I had zero contacts at the company,” he explained. “I was prepared but was unable to get my foot in the door.” Not one to be dissuaded, Hazard was persistent. He applied for 8 jobs with McKesson, hoping one would get him in. Hazard eventually landed a job as an Engagement Manger, an accomplishment he attributes to his military experience. “My military time taught me incredible values and they stick with me today,” he explained. Hazard follows the values of the Army and it guides his personal and professional life, whether at home, on the battlefield or in the office. LDRSHIP. Loyalty, Duty, Respect, Selfless Service, Honor, Integrity and Personal Courage. Living his life with LDRSHIP values as he grew his career was important to him, McKesson fosters ICARE values (Integrity, Customer-First, Accountability, Respect and Excellence). His current role as Account Executive for McKesson Pharmaceutical is one, he never dreamed he would have. Hard work, perseverance, and his LDRSHIP values helped get him there.

Both Saxton and Hazard faced hurdles when they left the military. “Companies don’t always look at military experience in the same way as civilian work experience,” said Saxton. “I had to work hard to get them to see the value that I brought to the company as a veteran.” But with McKesson, both veterans found something different. “McKesson values military experience,” Hazard explained. “They know that veterans bring respected leadership, collaborative skills, and organizational training.”

To benefit veteran employees, the McKesson Military Resource Group serves as a networking and support opportunity for all employees to recognize and welcome veterans and their families to McKesson. “The sense of camaraderie is overwhelming,” Saxton shared. “It doesn’t matter what your job was in the military; now we are all the same.” Hazard explained how the group shares stories and experiences with one another. “It’s very impactful to have that level of connection with co-workers,” he said. Both feel that the company is keeping an eye out for its military employees to ensure their talents do not go unnoticed.

Hazard and Saxton encourage veteran jobseekers to consider a career with McKesson. “There is a job here to fit every Military Occupation Specialty (MOS)” Hazard explained. “By focusing on the ‘soft skills’ learned in the military, veteran applicants can stand out against the crowd.” Working for a company that supports and values military experience bridges veterans’ military service with their civilian career, easing the transition between the two. McKesson has been recognized as a 2020 Military Friendly Employer.

Neither Saxton nor Hazard had a career with the McKesson in mind when they left active duty military service. Both sought a company that provided an opportunity for growth and a company culture that supported military service. At McKesson, they found that and more. Now these veterans are thriving in their roles and proving that military service is a true asset in the professional world.