Natural Leader Trades Army for Enterprise – And Loves It!

Editor’s Note: The following story highlights a veteran at Enterprise Holdings. Committed to including talented members of the military community... 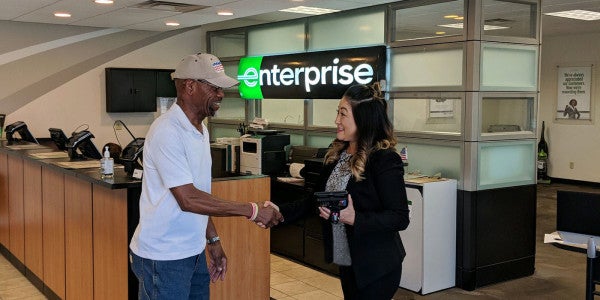 Editor’s Note: The following story highlights a veteran at Enterprise Holdings. Committed to including talented members of the military community in its workplace, Enterprise Holdings is a client of Hirepurpose, a Task & Purpose sister company. Learn more here.

Many people know that Enterprise is a car rental agency, with locations on military installations. But they may not know how tightly Enterprise is intertwined with America’s military heritage.

Enterprise founder Jack Taylor served as a Navy pilot on the USS Enterprise in World War II, and when he launched his own company, he incorporated the experience and values he learned during his service. Six decades and three CEOs later, Enterprise is still a family-owned business. President and CEO Pamela Nicholson (the first outside the Taylor family) continues to live out the founding values Taylor established at the beginning.

One of the values that Enterprise holds closest is its support of military families, veterans, and spouses. Veterans, as well as members of the National Guard and reserves, make up 10% of the company’s U.S. workforce. Enterprise realizes that veterans bring some great qualities to the table. And veterans quickly realize that Enterprise is a great place to work.

Army veteran Songhui Ciofi has worked at Enterprise for eight years. She was interested in working for Enterprise not only because they are an industry leader, but also because she was impressed with Nicholson’s career path to CEO. Since beginning her career at Enterprise, Ciofi has worked at several different branches all within a 45-minute radius, which is something she loves. “You can get a different look within the company,” Ciofi said.

“Enterprise has a very similar philosophy and culture to the military,” Ciofi said. “They have a strong foundation, built on teamwork. Our team is like our family; we invest in each other’s careers and professional development.” That work environment, Ciofi said, is the main reason she’s stayed with the company, and will continue to do so.

Ciofi, who is fluent in Korean, served for 10 years in the US Army as a logistics specialist and also as a cryptologic linguist. She thrived on the structured environment of the military. In fact, that love of structure was one of the most significant hurdles in her transition. “Moving from an environment where your days are predetermined — where you receive a report time for formations, meetings, and are even told what to wear — to the civilian world was the most challenging thing for me,” she said. Now that no two days are alike, she’s become much more comfortable with the civilian workday.

Ciofi utilized the Army Career and Alumni Program, which is now called the Soldier for Life – Transition Assistance Program. She also recommends getting involved in the local community and going back to school. “Using GI Bill towards a degree in business and marketing is beneficial, as is attending networking events through the local chamber of commerce,” she said.

There has never been any doubt among the Enterprise team that veterans have incredible experiences and skills that transfer well to their civilian careers. The trouble often lies with veterans and transitioning service members articulating those experiences. Ciofi believes that being able to translate her military experience into civilian terms helped her immensely in her job search. “Job-specific skills and some of those ‘soft skills’ play a key role in making my current position easier,” she said.

Throughout her decade in the military intelligence corps, Ciofi learned to read body language, studied human relationships and built rapports with all types of people. Those skills help her to interact one-on-one with her customers today.

Ciofi stressed how important it was for her to be able to use her benefits as an on-ramp to civilian life. “I was able to use the resources available to me, including some relocation and transition courses,” she said. “However, I believe finishing my degree before starting work really gave me an extra benefit.” Many universities have excellent career services, and Ciofi’s alma mater Tarleton State University (part of Texas A&M;) is no exception.

From One Career to Another

While some may wonder how a crypto-linguist becomes a branch manager for Enterprise, the transition was natural for Ciofi. “Both organizations are very goal-oriented,” she said. “They both allowed me to be part of the organization and to influence the structure and environment.” The military places a lot of pressure on its leaders, from worrying about the welfare of their troops to ensuring the completion of the mission – and Ciofi feels that pressure helped her become a better leader in the civilian world. “A leader is not always a manager, and a manager is not always a leader,” she said.

Ciofi is proud to represent female veterans and Enterprise employees, and she wants to encourage her fellow veterans to believe in themselves. “Don’t be apprehensive about being competitive,” she said. “You have so much to offer; don’t feel guilty about that!”