Editor’s Note: The following story highlights a veteran at Johnson Controls. Committed to including talented members of the military community … Continued 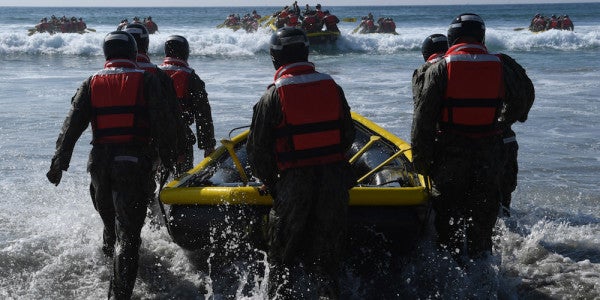 Editor’s Note: The following story highlights a veteran at Johnson Controls. Committed to including talented members of the military community in its workplace, Johnson Controls is a client of Hirepurpose, a Task & Purpose sister company. Learn more here.

Johnson Controls is a global leader in diversified technology and manufacturing, making it a great fit for the vast range of skills learned within the military. The company showcases the value of veteran talent by filling its workforce with more than 3,000 employees who have military experience. Johnson Controls even has a military recruitment program to hire more veterans, like Cmdr. Steve Mitchell, a former Navy SEAL who joined the company two years ago. Mitchell, a current Navy reservist, quantified his valuable expertise to gain a management position with the company whose North American Operations are based in Wisconsin.

Mitchell is the construction sales manager for the Washington, DC-region, primarily responsible for HVAC equipment and building automation controls. He served on active-duty for 12 years before transitioning into his current billet with the Navy Reserve. Mitchell connected with Johnson Controls after realizing he was looking for more in his civilian career.

“When I got out of the Navy, I went and worked for a private company first and so, I always thought about the Fortune 500 companies, what are they like. So, when the opportunity presented itself to come to a larger organization, I jumped at it. That’s why I came here to Johnson Controls,” he explained.

One of the foremost employment challenges among veterans is capturing exactly what they did in the military in ways that civilian employers can understand. Mitchell was able to fill his resume with metrics that measured his performance and proficiencies.

“It’s hard, but one thing is a lot of us don’t—I didn’t even realize—know what metrics are when I was in the military. So, I started to do some job interviews and they asked, ‘Have you ever used metrics?’ and I said, ‘What’s that?’” he said. “Because you don’t realize that you do it, but we count everything and we keep track of everything. It’s just a different terminology. For me, it was really just going back and looking at how many people did I lead, how many departments was I in charge of, what was the value of those departments, what was our readiness level. Those are all metrics that a lot of times we take for granted.

“Once you know what you’re looking for and to quantify all of the accomplishments, it wasn’t that difficult,” he added.

Cmdr. Steve Mitchell, a former SEAL who works as the construction sales manager for the Washington, DC-region for Johnson Controls.Courtesy

Because of the large number of veterans employed at Johnson Controls, and specifically in Mitchell’s department, he says he found a familiar feeling of camaraderie joining the team.

“That instantaneous teamwork and trust that we get in the military … interestingly enough, it takes a lot of time to build that up. Transitioning, what I found, when you get into the public sector, developing those relationships takes a lot more time,” he shared. “Find a company that not only advertises that it’s pro-military but has the initiatives in place to support it, and Johnson Controls has that. We have internal resources, a veterans’ support network, and my team here is almost 50 percent military.”

He says Johnson Controls really goes that extra mile in walking the walk and talking the talk when it comes to veteran support, including peer-to-peer networks. It is one of the many attributes that led him to build a career there.

“Regardless of any MOS that somebody’s coming out of, a company like us that’s this diverse has a place really for anybody’s skillsets,” he said.

For those preparing to leave the military, Mitchell recommends slowing down to decipher what it is you want to do. Take the time to determine your interests while evaluating skills and accomplishments earned during your military career.

Johnson Controls currently serves customers in 150 countries around the globe. The company will continue its veteran recruitment and retention programs because of the parallels between military occupational specialties and the innovative work it does. For more information on Johnson Controls, visit Hirepurpose.