It’s Not Just Your Imagination: It Really Is Harder For Women To Get Promoted

Equality for women in the workplace comes up all the time in the media, in casual conversation, in sports, and … Continued 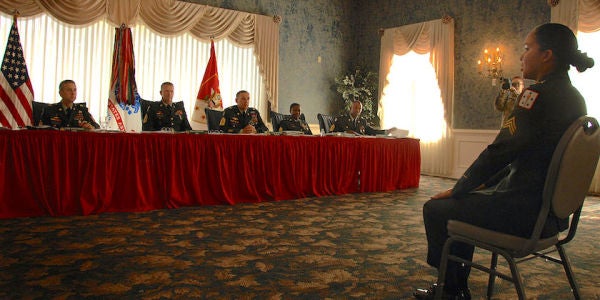 Equality for women in the workplace comes up all the time in the media, in casual conversation, in sports, and even in political debate. It’s an unavoidable topic in the early 21st century. Not just wages, either, as it turns out even today women get pushed into staff jobs, and many evaluations are biased against them. The military is similar. Women are often told, “You can’t go to that assignment because you wouldn’t be able to shower,” or “It’s too dangerous for a female,” or “You can’t lift/hit/run/jump/lead that, women just aren’t ‘designed’ that way,” or a host of other excuses we are told are in our best interests.

Attitudes toward women in the workplace have much in common in both the military and private sectors.

Let’s start on the civilian side, where at least no one is shooting at you. Hiring is seldom the issue: women and men tend to be hired in roughly equal numbers at most large businesses. According to a recent McKinsey and Lean In study, it is moving up the career ladder through access to appropriate challenges, client interaction, and competitive evaluations where women hit roadblocks. And those blocks get put in place earlier than one might expect. While 46% of the entry-level workforce are typically women, by the relatively early point of promotion to junior manager, women are just 37% of the cohort. The numbers only decline from there.

Women in the Workplace 2016, McKinsey and Lean In.

Why is this? Promotions in the workplace are supposed to be merit-based, but often rely less on talent than opportunity. Both men and women need leadership interactions and mentorship and challenges that force them to excel above their peers. Yet according to the study, women “who negotiate for a promotion or compensation increase are 30% more likely than men who negotiate to receive feedback that they are ‘bossy,’ ‘too aggressive,’ or ‘intimidating.’” They also have less access to senior leaders and are less likely to receive feedback from their superiors, despite asking for it as frequently as men.

Further, a recent study from Journal of Applied Psychology found that women in “line” positions (equivalent to “tactical” positions in the military) receive fewer positive evaluations than women in “staff,” or administrative, positions, suggesting that stereotypes might be at work.

The study also found that women overall receive worse evaluations than men in both line and staff positions when both perform the same duties, especially with a male supervisor. Perhaps most frustratingly, women who are promoted show substantially higher positive evaluations than male peers, but may still be passed over later.

Related: The US Military Has No Gender Pay Gap »

This study looked at fields like finance and retail where physical differences should have no impact. It’s easy to imagine how much worse the differences might look in male-dominated construction and engineering jobs.

Throw in maternity leave and putting a career on hold for a bit, add in less reported interaction with senior leaders and a perception of weak negotiation skills with no offered training, and you see higher turnover rates. In math-heavy science, technology, and engineering careers, collectively known as STEM, one study showed women being 45% more likely to leave their positions than men, with significant numbers reporting climate, pay, and low probability for advancement as reasons. It’s not a lack of talent causing these problems, as most women in such positions take it as a given that they have to meet a higher standard than their male counterparts anyway.

You might think the military would be better about this, but you’d be wrong. You also might expect that promotions (at least to a point) would avoid significant bias, at least, since the theory holds that positive evaluations plus time in service plus high physical training scores equals promotion. Don’t screw up, meet the standard, and eventually you’ll get somewhere. Everyone in uniform is supposed to be interchangeable, or so I was told in the Army, so if you actually exceed the standard you’ll make it further, faster.

Only this doesn’t seem to be the case.

With approximately one out of every seven members of the combined fighting force being women, there is an uphill statistical battle already. When all else is equal, it would be nice to see proportional advancement, but that doesn’t seem to be what happens. For example, in 1978, well before the other services, the Coast Guard was progressive enough to open up every job to women, including those in hostage rescue and interdiction (special operations similar to the SEALs). However, in 2015, there are still very few women in senior leadership roles and none in special operations. Why? Women seemed to apply in roughly proportional numbers, but many remain under the impression that they are not eligible or will not meet the qualifications before they even try. Those who get these positions still don’t get promoted to leadership. Sounds like the civilian sector.

Given recent table-banging about women in combat roles, the problem looks likely to get worse before it gets better in the military. Thinly veiled misogyny peeks through sometimes, telling women what their physical capabilities ought to be. Or, as some some bloggers claim, the military is “asking” for sexual assault by putting women into predominantly male units (instead of thinking “shouldn’t the men know not to assault?”).

Thus far, outside of the Coast Guard, there is practically no statistical evidence relating to American women in combat roles, because the numbers are too small and changes too recent to fully analyze.

Here’s the thing, though: gender equality is coming, however slowly, in all sectors. It is coming because there are fighters out there, both men and women, who want talent and mission effectiveness to be the final judgment, not gender or race or sexual orientation. Women are starting to push the envelope and change the narrative about performing equally when given the opportunity. But until military and civilian leadership improve and empower more women to step up and demonstrate their abilities, it’s going to be a hard road for the women brave enough to combat not just the enemy and the competition, but colleagues and fellow service members as well.

For military women, the fight doesn’t stop once you leave the service. The military is looking to improve, but the situation isn’t much better out in the civilian workforce. And as veterans — all of us — we should be leading the charge in the workplace. Your gender doesn’t make you smarter or your aim more true. Training and adhering to your strengths does.