Editor’s Note: The following story highlights a veteran who works at Amgen. Committed to filling its ranks with talented members... 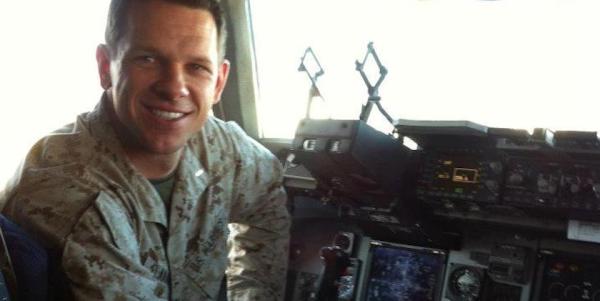 Editor’s Note: The following story highlights a veteran who works at Amgen. Committed to filling its ranks with talented members of the military community, Amgen is a Hirepurpose client. Learn more here.

As one of the world’s leading biotechnology companies, in 2016, Amgen was named one of Fortune magazine’s World’s Most Admired Companies, as well as one of Fast Company’s 500 Most Innovative Companies.

One way Amgen stays at the top is by hiring employees who share its core values, which serve as the compass on its mission to serve patients. These core values include being ethical, working in teams, and trusting and respecting each other. Among those who’ve found themselves gravitating to Amgen, in part, because of their shared values, are military veterans.

Hirepurpose chatted with one such veteran to find out why he chose to work for Amgen, and how other veterans can follow in his footsteps.

When Scott Flanagan, 30, a U.S. Marine Corps veteran, started looking for a job in the civilian sector in 2015, Amgen ranked at the top of his list of companies he wanted to work for. “Amgen was rated very highly for how they take care of their own, and that’s very similar to the military,” he says. “I also get to feel good about the job I do, just like I would in the military.”

As a supply chain manager at Amgen, Flanagan’s job is to handle the logistics for getting Amgen’s products — medications that treat grievous illnesses — to the doctors and patients who need them. Flanagan’s experience as a logistics officer in the Marine Corps helped prepare him for the job he currently holds. “All the supply chain knowledge I gained in the military, all that experience — it was invaluable,” he says. “A lot of what I learned in the military correlates to my job now.”

“The best part of my job at Amgen is being able to help people,” Flanagan says. “Like in the military, when you did a mission, you saw the fruits of your labor, at Amgen, when you get to help a patient, you get that same feeling.”

The company also takes very good care of its employees, according to Flanagan, and it has created an atmosphere that reminds him of his life in the military. “They rival the military in taking care of their own,” he says. “And the atmosphere is very similar to life on base. It’s not just a job, but a community.”

But getting to Amgen wasn’t that easy. Before he found the company, he spent hours a day sitting at his computer, applying for jobs, looking for anything that matched his skills. And though he’d gone to college at The Citadel, he felt completely unprepared for his re-entry to the civilian world.

“When you get out, there’s not really a transition. There’s no help getting acclimated to civilian life,” Flanagan says. “It’s a long process — it’s tough and very lonesome. And coming from the military, you’re so used to having a team around you and being able to accomplish anything, so it’s a real adjustment.”

Flanagan started looking for work in March 2015, five months before he transitioned out of the Marine Corps, but he didn’t land his job as a supply chain manager at Amgen until October and advises other vets to start their job hunt as early as possible. “You get so caught up in the job you’re doing that your exit creeps up on you,” he says. “But you can never start too early. Whether it’s going to college or looking for a job, start planning early — at least six to nine months before you leave the service.”

Once out of the military, you need to find resources to help with transition into civilian life. For Flanagan, he found his help through the large military community at Amgen and its Veteran Employee Resource Group called AVEN. Flanagan credits Amgen’s military community with being able to adjust not just to life at the company, but to life outside of the Marine Corps.

“Coming out, you’re used to a very structured, very limited way of doing things, and in the civilian world, that’s not how it works,” he says. “Being able to pick the brains of other ex-military members about Amgen and their experience really helped out a lot.”

If you’re looking for a job now, Flanagan suggests looking around to see if the company you’re applying to has any military veterans on staff and reaching out to ask them about company culture and lingo. “It’s a complete 180 from the military, and you need to fit in and be part of this new team,” he says, so you should take every opportunity to learn about your company and new colleagues.

Talking to vets on staff could also help you land the job, Flanagan says. “When I applied at Amgen, the senior manager had military experience, and when he saw my resume, he recommended me for the job,” he says.

If you’re just starting your job search, Flanagan suggests reaching out to friends and family to ask about their jobs and the companies they work for. And if you’re applying for jobs online, look around and find someone who works there to reach out to. “You can’t just send in a resume anymore,” he explains. “It’s all about who you know.”

But even knowing someone won’t help you if you’re not willing to put in the work to find the job that will bring you the same fulfillment that Flanagan has found at Amgen.

“The most important thing I’ve learned is that the transition is up to the individual,” he says. “You have to be willing to transition yourself.”