Bring your military professionalism to the job interview

Veterans can all reach their full potential by networking, using the GI Bill and bringing their military professionalism to every job interview. 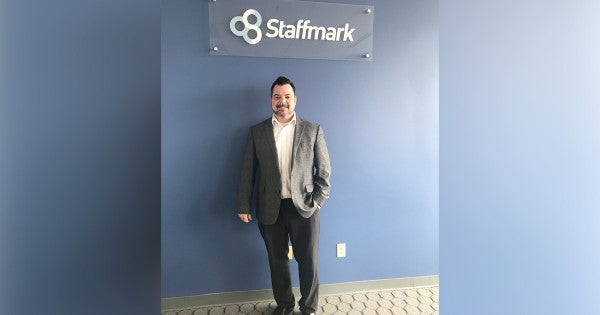 Editor's Note: The following story highlights a veteran atStaffmark. Committed to including talented members of the military community in its workplace, Staffmark is a client of Hirepurpose, a Task & Purpose sister company. Learn more here.

It's nearly impossible to credit the invention of the vast, every-changing internet to a single person. It's the result of work by many programmers and engineers – and even U.S. military members.

When Matt McGowan joined the Army in 1991, he was assigned to a brand-new MOS: 31F Mobile Subscriber System Network Operator. As he describes it, “We would go out to the field with infantry, armor and artillery units, and we set up centers for phones and computers that could be used in the field and integrate with military and civilian systems. We were the original internet.”

McGowan loved being part of something new and special. After four years in the Army, he considered applying his unique training and computer skills to a degree in computer networking. But the world was changing quickly in the late '90s, and by the time he finally earned his degree in 2004, the new field of computer science was completely saturated with graduates.

Despite this challenge, McGowan found a way to pivot and land a successful job in a different field. He now works as a market manager in the Skilled Trades division of Staffmark, a commercial staffing company. McGowan credits his Army training for his success: “I wouldn't trade the experience for the world. I'm grateful for where it has taken me. It gave me a good start even though my career did not begin in staffing.”

Tell us about your transition experience when you left the Army in 1995.

I kept running into roadblocks using the GI Bill. The resources we have now for veterans weren't available 20 years ago. I tried to go to University of Cincinnati when I first got out, but all the veterans' program did was refresh basic math and English. So I went to work at my family's restaurant. I eventually went to ITT Tech to learn science and engineering, then transferred to Capella University to complete my degree in computer networking. I wanted to stay in my field of experience from the military, but by the time I graduated in 2004, everyone had that same specialization.

Shortly after graduating from Capella University, you began working for Staffmark. What helped you stand out for the job?

I brought the professionalism that I had learned in the military to the job interview. When I graduated, I had my new degree and was ready to take on the world. But my field was saturated, so I applied everywhere but received few callbacks and interviews. I went into my local Staffmark office, dressed professionally, carried myself with a military professional bearing, and was able to differentiate myself. The interviewer was impressed and set up an interview with her boss in the technical division. Because of my skills acquired in the motor pool, using a welder and making repairs, I could talk competently about this field. So I got a call back for a second interview from the Skilled Trades division.

The military prepared me well for this job. One of the things I enjoy is that I work with a different type of individual every day. I would absolutely recommend this to other veterans. I think they would excel in this line of work. Customer service allows you to talk to and interact with a diverse group people, just as you do in the military.

If you met another veteran getting out of the military, what advice would you give them?

I wandered for 10 years before I found my post-military career. If I had more guidance and assistance at the time, my career path may have been different. If I could stress anything to veterans making the transition, it is to utilize the resources that are available now — NGOs, nonprofits, people that want to assist veterans. Hop on LinkedIn and look for other veterans and groups of veterans. Network, network, network! Veterans are a family like no other. There will always be someone willing to help you, pick you up and dust you off. You just need to let them know you need help.

You have now worked with Staffmark for 14 years. What do you enjoy most about working there?

The company is made up of terrific people. They are supporting me as a parent and ask how they can help. The CEO has a son who is a Marine, and he is very supportive of veterans.

As an example, two days ago, I received a call from a veteran I had helped before with a VA claim. He let me know his situation, and I called the clerical division here. Within 24 hours, they had him placed at a large, well-known company, and they are going to train him and give him a fair salary to support his family. The people here are just amazing.

The thing that has kept me from wandering is that Staffmark is so supportive and allows us the time to pursue our own ideas. The veteran program started in 2012 as an idea. The support we received to start this program was tremendous. There is philanthropy in the hearts of folks from top to bottom. They realize we have subject-matter experts here, and they trust our ideas and initiative.

What is the veteran program you are referring to?

Staffmark's Operation Hired program consists of veterans and family members who are passionate about helping veterans. We help them learn how military skills translate into the job market today. “Adapt and overcome” are inherent skills to many veterans. In the military, you learn so many things outside your MOS that are useful to companies on any level. You learn to track inventory and be accountable for gear — that translates into inventory control in a warehouse. I'm very proud of this program and of Staffmark's participation. It was originally a group of HR professionals in Cincinnati who are also veterans. Our program came out of that. We network and share candidates, openings, and meet quarterly. We share contacts in different markets to let veterans know their options. One spin off group is LZ Cincinnati, which helps veterans see that Cincinnati is an attractive place to come work.

McGowan's experience demonstrates that it is not only possible to find a civilian career different from your military MOS, but it can also be very fulfilling. McGowan hopes veterans can all reach their full potential by networking, using the GI Bill and bringing their military professionalism to every job interview.