Editor’s Note: The following story highlights a veteran who works at MetLife. Committed to filling its ranks with talented members... 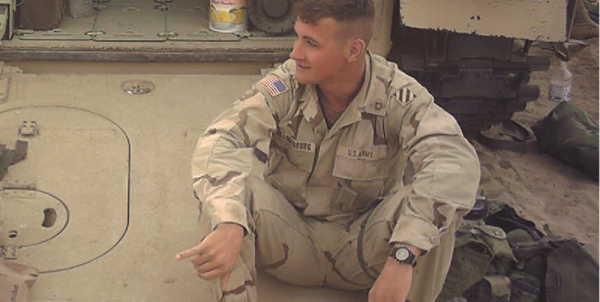 Editor’s Note: The following story highlights a veteran who works at MetLife. Committed to filling its ranks with talented members of the military community, MetLife is a Hirepurpose client. Learn more here.

Justin Brandenburg served in the Army and on active duty in the National Guard for almost a decade. He now works as an insurance adjuster for MetLife in Henderson, Nevada.

Every year, tens of thousands of men and women leave the modern military and seek to continue their lives in American society. This is no small feat. Many of these Americans feel disconnected from the nation's society as a whole; the simple goal of finding the same sense of purpose they felt in the military can seem nearly impossible.

But many do successfully transition, millions in fact. And a recent study from the Department of Veterans Affairs found that when post-9/11 veterans do find work, they earn 11% more than their civilian counterparts. Beyond jobs, modern veterans need purposeful, meaningful careers that appreciate and harness their skills and experiences. And ample great companies want to fill their ranks with veterans for that reason.

Brandenburg currently works as an insurance claims adjuster in Henderson, Nevada, with MetLife. He has a meaningful career he loves that meets his needs and provides opportunity for growth. But how did he get there?

There is nothing uniquely distinct about Brandenburg’s experiences in the Army. He’s a roughly 10-year veteran of the Army and National Guard in the infantry and military police communities; someone who dropped what he was doing and joined the service after the attacks on Sept. 11. It’s something you hear quite often from modern veterans: Men and women who felt compelled to commit to defend their country in a moment of crisis.

“I went down and signed up about two weeks after 9/11 on the delayed entry program,” Brandenburg told Task & Purpose. “I always had an inclination that I would join the military in the back of my mind, but I kind of thought I would go to college first. Well, [9/11] sort of tipped that scale.”

He finished his first semester of community college, and left for basic training in January 2002. A year later, Brandenburg was deployed to Kuwait, and eventually was a part of the first U.S. forces on the ground during the U.S.-led invasion of Iraq.

“Once I did my initial tour, I thought that was going to be it, I only did two years of active duty,” Brandenburg said. But the military was harder for him to quit than he expected. Within six months of getting out, he began to miss it. He decided to leave Georgia, where he had stayed after separating from Fort Benning, and move home to Nevada and join the National Guard.

“I decided to move back home, closer to home, to Las Vegas, because Las Vegas has in-state tuition for veterans, automatically, so I figured that would be a lot more affordable to finish school,” he said.

When Brandenburg talked about his transition, he spoke with a casual matter of factness that almost completely concealed the amount of strategic thinking that went into his successful experiences in the service and in civilian life.

“Came back out here, joined the guard, and that waived my tuition, so I was going to school for free,” Brandenburg said. “And that was my whole intent. And then within six months of being here in the Guard doing one weekend a month with my prior background and everything, I was offered an opportunity to come on active duty for the state of Nevada National Guard.”

Brandenburg found himself on active duty for another five years, a period that included more deployments.

“I thought the National Guard didn't deploy, I was wrong — so I deployed two more times,” he said. “After my third deployment, that's when I came to the conclusion that I think I've done enough, I think it's time to transition and seek a position in the civilian marketplace.”

He found himself drawn to commercial insurance. His wife had worked in the field for years.

“I found it amazing just hearing about her work stories and how her day-to-day works and what's entailed in the commercial insurance business,” he said.

And so, with 10 years of active-duty service, including three deployments under his belt, Brandenburg began to look at what life would be like on the outside. He decided to transition to the National Guard and take a swing at civilian life. His plan was to enter the commercial insurance business.

But here’s where that persistent strategy kicked back in — while Brandenburg was engaging in his mandatory military transition classes, a bureaucratic process that many soldiers merely trudge through, he used that time strategically to set himself up for the next step.

“I decided to go out and obtain my property and casualty insurance license. I knew that was what I was going to need going into the job market with zero experience. So my wife kind of guided me along,” he said.

Brandenburg talks about his initial transition with an interesting pronoun — “we.” Statements like “We came to the conclusion that if I was proactive, got my license ahead of time, and was going into the job market …” underscore the partnership Brandenburg has with his wife and the pivotal role she had in helping him through his separation from active duty.

With a solid strategy and a good support network, Brandenburg landed a job in June 2012 within a week, he said. He was working as a commercial lines broker at a retail agency doing insurance for the transportation industry.

The former infantryman and military policeman found his skills and experiences from the Army and National Guard translated aptly to his first job on the outside.

“I know a lot about how to move people,” Brandenburg said. “There are a lot of things that revolve around convoys, and safety, and all of the things that go into that.”

Brandenburg described his time as a commercial insurance broker as very successful, but his success in selling insurance enabled him to see another side of the business. He ended up doing a lot of face-to-face work with his clients and helping them get their claims resolved by working with their claims adjusters.

“So it came to a point where, once my clientele got big enough, I was dealing with just as many accidents as I was new business,” he said. “And in that process, I found that I liked working on the claims piece more than I liked the selling piece.”

After a little more than a year, Brandenburg said he began to realize he wanted a position in claims. A recent study from VetAdvisor and Syracuse University's Institute for Veterans and Military Families found that as many as 65% of veterans leave their first job in the civilian workforce within two years, often due to limited opportunities for advancement, so Brandenburg’s experiences are not a-typical for the modern veteran.

What is perhaps a bit notable is the reflection of his character with regard to how he handled searching for the next job. He quit his first one.

“I didn't think it was fair to my employer that I was job hunting on their dime, so I resigned from my position,” he said. “I got a five-year separation package off the book of business that I wrote, so I knew I was financially okay, and then I went out and started marketing myself to pretty much every insurance carrier under the sun.”

Brandenburg’s habit for strategic thinking kicked back in. He began to focus his job search on military-friendly companies. That boiled the job search down to about three companies that met the standard of being military friendly, he said. MetLife was one of those companies.

In the insurance game, MetLife is a giant in the space. The 147 year-old company employs more than 65,000 people. Filling its ranks with veterans is an important part of that, and that was something that Brandenburg was able to pick up on.

Beyond merely saying it wants to hire veterans, MetLife invests in its veterans and National Guardsmen employees, and that was something Brandenburg said he was drawn to.

“On their benefits page, it shows military time for National Guard duty, reserve duty, which I'm still in the Guard. They have paid time off for that. We have our two weeks training. That's a really big plus, where you don't have to use your normal vacation time to go do the military thing,” Brandenburg said. “MetLife also pays differential pay while soldiers are deployed. So I make what I make at MetLife and if my military salary is below my MetLife salary while I'm deployed, MetLife will pay the percentage above my military pay to ensure I don't have a financial deficit while doing my military duty.”

MetLife was hiring in his area, and so he prepped diligently for his interview. He researched the history of the company and read employee accounts online to get a feel of what the interview process was like.

Then, Brandenburg faced the challenge countless veterans face — translating his experiences in the diverse and dynamic military to a civilian job interview.

Here’s how he did it:

“I did highlight the decision-making process and my experience from the deployments, that I don't have a fear of taking all of the information I have and making as good of a decision as possible,” he said. “That's one thing, being military police and infantry, on deployments, you have to make fast, decisive, educated decisions.”

Interviewing for a position for a liability adjuster, Brandenburg worked to connect his military experience as a military policeman to the new job he sought.

Brandenburg also avoided caricaturing his experiences in the military or himself as a soldier.

“I did not focus on my military training as a soldier, but I knew how to tailor my resume for the position I intended on getting,” Brandenburg said.

Now, Brandenburg has a great job at MetLife, working as a claims adjuster in the Henderson field claims office in Nevada. He’s been in the role for about a year, and said he loves both the current job and its potential for growth.

Justin Brandenburg at work for MetLife as an insurance claims adjuster in Henderson, Nevada.

He started as an accident investigator, but has demonstrated his knack for the craft and lately has been taking on duties with the special investigation unit on possible fraud and misrepresentation claims.

He’s still in the Guard, and said he plans to use his role as a military policeman in the Guard to further his civilian career. He’s slotted to attend the Department of Defense traffic school in May, which he said connects directly to his role at MetLife. He wants to work directly in the special investigation unit, and he hopes to apply for a position there in the future.

For veterans like him who may be transitioning now, Brandenburg offered a bit of advice.