As thousands more men and women begin transitioning out of military service, it’s become more important for veterans to understand... 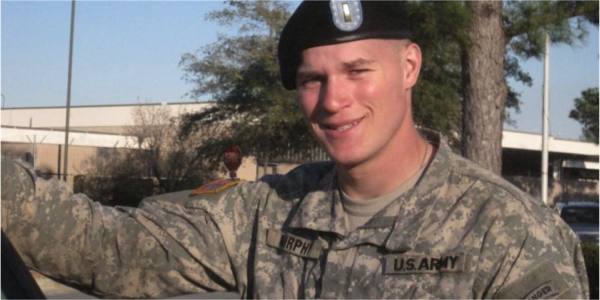 As thousands more men and women begin transitioning out of military service, it’s become more important for veterans to understand the realities of finding their place in the civilian workforce. And while it can be a tricky task even for those familiar with life in corporate America, it’s not impossible to find a fulfilling job.

Task & Purpose spoke with veteran Jake Murphy, now a purchasing consultant with Verizon, to find out how this Irving, Texas, resident overcame a life-changing injury and worked his way into a successful career.

Always interested in joining the service, after high school, Murphy, 28, chose to attend the United States Military Academy at West Point, where he’d been recruited to play lacrosse. It was, he admits, a different college experience than the one his friends were having, but the regimented lifestyle and hard work suited him just fine. After graduating from West Point, he attended Officer Candidate School, Ranger School, and Airborne School at Fort Benning before starting work as a platoon leader at Fort Drum.

Having served as a captain for his high-school sports teams, as well as for the West Point lacrosse team, leadership came easy to Murphy. “I liked the responsibility, and I liked having an influence on the guys in the platoon,” he told Task & Purpose. “I was their boss, but we also bonded as a family, especially when we were deployed to Afghanistan.”

Jake Murphy stopping during a patrol in Kandahar, Afghanistan, to engage with a child in the streets.Photo courtesy of Jake Murphy

Murphy’s life changed in Afghanistan. In July 2011, he was on patrol when he hit an improvised explosive device. He ended up losing both his legs as well as suffering a traumatic brain injury , and was in a coma for six weeks. “When I came out, I had to get my bearings, and I had to start almost from scratch,” he said. Not only did Murphy have to recover from a TBI, but he had to relearn how to walk in his new prosthetics.

While he was recovering at Walter Reed National Military Medical Center, Murphy started to think about what his next move should be. He’d received a Bronze Star and a Purple Heart for his service and he was still a valued member of his unit, but he knew he couldn’t stay in the Army forever.

Murphy started seriously thinking about transitioning out of the military in 2013. In May of that year, he received a service dog, Gabriel, from 4 Paws for Ability, a nonprofit that matches service dogs to veterans and children who’ve lost the use of their limbs, to help him with his transition. Murphy originally had no luck finding an organization that could pair him with a service dog, but the soldier who’d saved his life two years earlier, Derek McConnell, was once again able to lend a hand — or a dog. Gabriel had originally been trained as McConnell’s service animal, but when McConnell passed away in March 2013, from complications due to injuries he’d sustained the same day Murphy was injured, 4 Paws began looking for a new owner for Gabriel. Murphy seemed like the obvious choice.

In July 2013, with Gabriel by his side, Murphy decided it was finally time to transition out of the military.

“I could have stayed in the Army,” he said, “but I couldn’t continue to do what I loved, which was working in the infantry, so I decided it was time to get out.”

Murphy knew he needed to have a plan before he left the Army, so he got to work long before his final day in uniform. He wasn’t entirely certain what he wanted to do, but he’d enjoyed his role as a platoon leader, and the responsibility and influence that came with the job, and he knew he wanted his civilian job to be equally challenging — and rewarding.

“I knew I wanted to try to translate my Army skills into the corporate world, and I wanted to be a leader again,” Murphy said.

Jake Murphy riding his hand cycle at Yankee Stadium while in the city for the Wounded Warrior Project NYC Soldier Ride.Photo courtesy of Jake Murphy

His job search began almost by accident, when he met the Sentinels of Freedom during one of their visits to Walter Reed. The Sentinels of Freedom is a non-profit organization that provides severely wounded post-9/11 veterans with financial, mentoring, and networking support while they transition back into civilian life. The representatives encouraged him to apply for their scholarship program, and once he was accepted, they began setting up job interviews and helping him prepare. But, he says, you don’t need an organization behind you to find a job — just a good group of people willing to help.

“The network of West Point grads is so large that I probably would’ve linked in with them had I not met the Sentinels of Freedom,” Murphy said. “I’d also established a network in the Army that I could have turned to.”

Though Murphy had some help finding his bearings in the civilian world, he wasn’t worried about succeeding. He’d always had a clear vision in mind of what he wanted to do with his life, and even serious injuries and setbacks couldn’t deter him for long.

Murphy went on several interviews during his job search, but when he connected with Verizon, something clicked.

“My director at Verizon is in the Army Reserves, and there’s a sizable veterans group there, too,” Murphy said. “Verizon has wrapped their heads around the skills that vets have, and they work to actively recruit vets. They even have an online resource to help vets translate their skills into civilian terms.”

And vets have a lot of skills that should appeal to civilian employers, Murphy says. From multitasking to having exceptional organizational skills, from working efficiently to feeling confident enough to ask for help when needed, Murphy says that all the traits that made you a good soldier, sailor, airman, or Marine also make you a good employee.

“A lot of vets don’t know the skills they have or how to translate those skills for the corporate sector, and that’s where a lot of them run into problems,” Murphy said. “But the structure you learn in the military really helps you into corporate life.”

For Murphy, that’s one of the biggest perks to his job: feeling like he’s still linked in to his old Army gig. “Of course, there’s more flexibility here than in the Army,” he said, “but I also get to do work that I really like, and there’s a real sense of pride in the organization.”

When it comes to landing a job like his, Murphy says not to worry if you didn’t go to college. Not every job requires a degree. If you know what you want to do, he says, you should start by researching the company and the role you want to fill there. Find out what they’re looking for and then figure out if you meet their needs or if you need to do some work first.

Once you’re ready to start applying, there are a few things to consider. First, vets need to learn to self-promote. “Vets aren’t used to talking themselves up,” Murphy said. “They don’t always understand how to brag about themselves.”

To start, Murphy suggests looking for online tools that will help you write a resume and explain your military experience in corporate language.

Most of all, though, Murphy says that the keys to getting a good job are being willing to take risks, take initiative, and have confidence in your choices and your work. But not too much confidence, he warns. “If you’re 100%confident, you probably need to look for a different job,” Murphy said.

“You should always try to challenge yourself and grow.”