Drones are the future. They could also earn you some serious cash

The advancements in drone tech are comparable to that of cell phones. It's hard to imagine a time when your … Continued 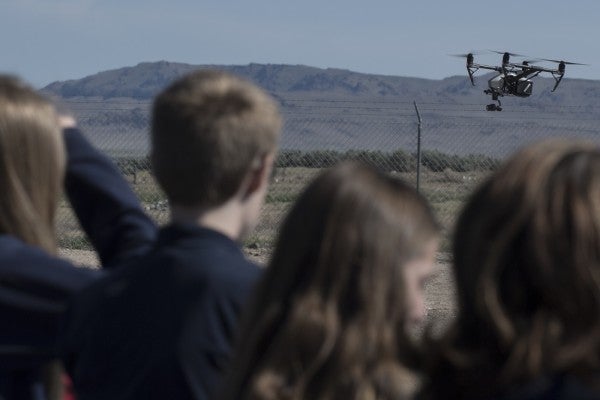 The advancements in drone tech are comparable to that of cell phones. It's hard to imagine a time when your portable lifeline to everything (traffic, calendar, family, friends, banking, shopping, eating, yes, we literally mean everything) was the size of a backpack, sat on the center console in a car, and did nothing but make calls — with crap reception to boot — for something like $24.99/minute.

Seemingly overnight, Zack Morris had one at the Max calling his girl Kelly Kapowski to see if she wanted to fool Mr. B. and ditch school (that's a little Saved by the Bell reference for you Millennials out there. Add it to your Netflix binge list and thank us later).

Even then, those phones were the size of a small fish tank. Cheers, 1990s.

Fast-forward a few years, and here we all are, walking around with a tiny device in our hands playing our music and gender-swapping our faces, paying for things with a digital wallet, transferring money to our friends with emojis, with access to the whole world wide web at a moment's notice.

You can even use them IN THE SKY whilst traveling on most domestic flights.

Yes, we know you understand the amazement that is the development of cellular devices. We're sure you appreciate that it wasn't so long ago that you had to be attached to a wall to make a call and now you can touch a button and see someone's face across the world whenever you want. We're confident you stay up at night and marvel at it as much as we do.

Equally (probably more if we're being honest) incomprehensible is the unbelievable advancements in drone technology. In about the same timeline of Alexander Bell to cell, we went from Orville and Wilbur trying their damndest in North Carolina just to get off the ground, to remote control airplanes dropping bombs on the Taliban. And now, it's just a matter of time before they're delivering our packages (drones, not the Taliban – nobody wants that). Again, magic.

We've already soared past the hoverboard.

The future is here

Earlier this week, Amazon announced that the delivery super giant is just about ready to start droning (yeah we're making that a verb for drones now, you're welcome) your packages with the unveiling of its Prime Air electric delivery drone at its re:Mars artificial intelligence conference in Las Vegas. And what happened in Vegas definitely won't stay there.

Apparently this little delivery vixen “combines the behavior of a plane with that of a helicopter,” which is kind of like someone having a great personality and actually also being hot. If Amazon can deliver your sprouted multi-grain bread in under two hours, we're confident that it's mere moments before Papa John's will be flying your gluten-free white pizza through the sky, too (Pro-tip: you're eating pizza. Just order the regular one).

“What does this all mean?” you ask.

Well aside from the clearly obvious decrease in amazon's carbon footprint, it means legit job security in drones.

“But I don't want to re-enlist just to learn to fly drones,” you say.

Well, Susan, you don't have to.

You figured out how to use that new software update on your cellphone (sidenote: way to go!). With the new Unmanned Aerial Systems Program at the University of Arkansas-Fort Smith, we're confident you can operate a drone, too. No matter your MOS, UAFS has a place for you in an environment that not only wants veterans, they understand them. That's why they've developed a culture to ensure you'll succeed, in a field that will always be relevant. Apply now to become a part of the UAFS tribe and have a career that will always be a part of the future.