9 Lessons From The World’s First Conference For Veteran Entrepreneurs

Veteran entrepreneurship is again a hot topic. America needs job creators now more than ever, and veterans are a great... 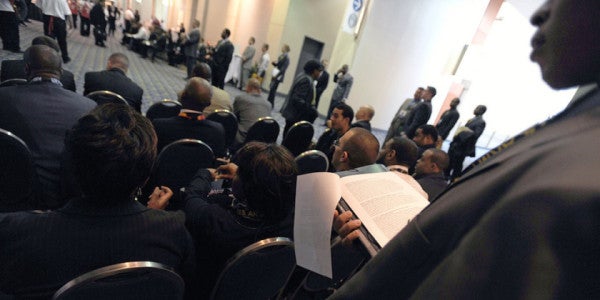 Veteran entrepreneurship is again a hot topic. America needs job creators now more than ever, and veterans are a great pool to draw from. We are resourceful, driven, work well in teams, and can get stuff done. The perfect archetype for an entrepreneur.

The numbers tell a different story, though. Veterans aren’t returning home and starting companies, at least not like past generations. Over 40% of service members returning from World War II and Korea became entrepreneurs. Now the figure is under 5%. Overall, veterans are more likely to work for themselves, but that trend doesn’t hold true for the most recent generation. In fact, veterans are a steadily declining percentage of people starting new businesses in the United States.

Why? What’s going on? And what can we do about it?

VETCON, a conference held in Redwood City, California, in March 2017, began with the idea that veteran entrepreneurs need to change the narrative around life after military service. Building a business is a natural extension of the training, experience, and civic identity that veterans all share. 2017, the first year, was an experiment. The goal was to learn more about the community of incredible folks doing great thing across the country.

And we did. Here are nine highlights from last month’s inaugural conference in Silicon Valley. There are also a few hints of things to come.

Great speakers, investors, and advisors all had similar stories to tell. Steve Blank, the Godfather of Silicon Valley, took the same “volunteer for everything” approach in the Air Force and Silicon Valley. This same spirit probably explains why veterans are more likely to start and run companies than their civilian counterparts.

2. Veterans execute at a world-class level.

Starting a business is incredibly hard. Failure rates are estimated to be as high as 90%. The extreme difficulty of entrepreneurship explains why people have started using new methods to improve their odds. The Lean Startup is by now the most popular one. Michael Pratt took this process and combined with his disciplined military-style execution. He used the various strategies and tactics to build Panamplify, a multimillion dollar company, in just four years.

3. Veterans build different kinds of companies than other people.

Entrepreneurship collides with military service, creating unexpected market opportunities. Billy Birdzell and the rest of the team at Crescent Cattle Company are building a massive halal beef farm in Turkey to sell to countries in the Gulf and North Africa. This helps address a large demand for high-quality meat by taking the best practices from Texas’s famous cattle ranches. The business is simple, but the idea emerged from the founders’ deployments overseas. They saw the need for food security in Gulf states and went from there.

4. Veterans will invest time to help each other.

Don Faul, former Marine and now CEO of Athos, was able to get an internship at Google because one of their executives, Roy Gilbert, was in the Navy. Roy saw the challenges faced by Google and understood how Don’s military experiences, like his own, would be very valuable. That first step into high tech led Don to Facebook, then to Pinterest, and now he’s running his own successful tech startup. But it all started when another vet took a chance on someone who didn’t fit the traditional tech mold.

5. Veterans want to create a social impact on their communities more than they want to make money.

Like every other business,Alex Pedersen and the Polco team want to be profitable. But they want to have a much bigger impact than revenue. Polco is creating a tech solution for governments who need a cost-effective way to poll local citizens. Right now they have no way to quickly and cheaply figure out what voters actually want. While not a traditional business, Polco won the pitch competition! This was a clear signal to the VETCON community that we care about value, not just profit.

6. Veterans who have already made it want to see other veterans succeed as business owners.

Steve Blank, the keynote speaker, came back later that evening to sit down for several hours with a bunch of different entrepreneurs. Many of the investors and pitch competition judges, veterans such as Mike Maples, Brandon Shelton, and Dan Gwak stayed for big chunks of the conference, even returning on days when they weren’t speaking.

Daniel Alarik, a former Army drill sergeant, doesn’t need to raise money. He builds businesses the old-fashion way: with profit. He started small, using the money he made from sales to hire more people and scale up operations. And it definitely works for him! Grunt Style and Alpha Outpost, his two businesses, are both multimillion dollar companies and he’s just getting started.

8. Veterans are just getting started.

To everyone’s surprise, VETCON was trending on Twitter in multiple cities (San Francisco, Chicago, and Washington, D.C.) on days one and two. PR guru and Marine veteran Eric Mitchell and his Life Flip Media team tapped into something special. Overall, VETCON had over 16,000,000 impressions on social media (aggregated via Tint). Clearly, there is a nationwide appetite for more opportunities to connect, mentor, support, and invest in each other.

9. Veteran entrepreneurship has the same diversity problems as many other fields.

In 2012, only 4.4% of veteran-owned business were owned by women. And women made up less than 10% of the VETCON attendees. But those who attended stood out. There was a powerful speech by Army veteran Jas Boothe, and a host of amazing entrepreneurs such as Graciela Tiscareno-Sato and Justine Evirs. A lot of work remains to evolve the community of veteran entrepreneurs into something that is more reflective of the work being done by every group. Next year, VETCON is pushing to have at least 20% women attendees, making it over-representative compared to the veteran population.

William Treseder is a former U.S. Marine, partner at BMNT, and partner at VETCON.