Your Resume Absolutely Needs This One Thing 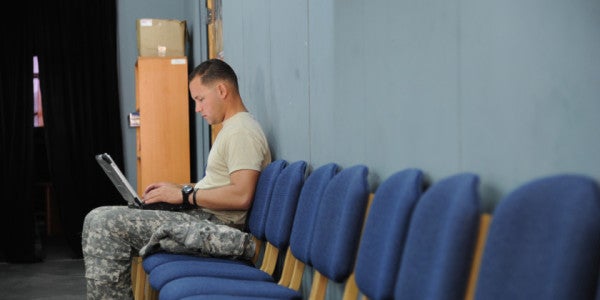 It’s finally done. After several hours of hard work, you look over your perfectly organized, spell-checked, and heavily edited resume, taking pride in your accomplishments laid out in striking black and white.

You’ve just left the military — maybe after one enlistment, or perhaps you’re wrapping up a distinguished career that lasted decades. Now it’s time to start a new one.

You send off your application. Click, there it goes. A few days later, the hiring manager at the company you’re applying to opens the email, prints out your resume, gives it the once over and then casually drops it into the “no-go” pile.

It’s an experience both veterans and civilians know all too well, but it doesn’t have to be.

Task & Purpose reached out to Ben Vinograd and John Thompson, the founders of Conditions Set, a nonprofit designed to help service members and veterans flesh out their resumes and land the jobs they want.

We asked Vinograd, the chief executive officer of Condition Set, and Thompson, the company’s president and a former Marine officer, what the one thing every veteran needed on their resume.

You need to show your results.

“I would say one of the biggest things that all resumes have to have and one of the biggest areas we see, is that people tend not to include their results, what they’ve actually accomplished,” explained Thompson, who added that many veterans simply copy and paste their billet description and list out their responsibilities.

“It sounds significant, but at the same time it doesn’t distinguish yourself from someone with the exact same list of responsibilities,” said Thompson, who served in the Marines from 2009–2013.

However, employers want to see what you accomplished, not just what you were tasked with doing.

“It’s great to see what you’re responsible for, but that doesn’t necessarily mean you did it well,” explained Thompson.

In short, you need to show what value you provided to your team or unit.

Now, how do you do that?

First, you start with your past work experience and duties, then you build off those.

“People default toward trying to tell the reader what they did, and it’s not necessarily the most effective way to get your qualifications across,” said Vinograd. “We find and have found that it’s more effective to show the reader.”

What you should be doing is listing your past positions and responsibilities, and then presenting anecdotal and hard data to show your accomplishments, explained Thompson and Vinograd.

“Did you accomplish your mission?” Thompson asked, rhetorically. “Did you impact those personnel you were responsible for? Did you improve any processes and if so, what were they and are they currently seen as still being a best practice?”

One way to better present both your responsibilities and the results is to tailor your resume specifically to the job to which you’re applying.

“One of the challenges we’ve found that veterans face is how veterans generally present the information, said Vinograd. “That includes the format and the content. The default that most learn through is to just list all the responsibilities and qualifications the service member has when leaving the military.”

Military veterans leave the service with a wealth of knowledge and experience that their civilian peers don’t necessarily have. It’d be a shame to lose out on a position you’re qualified for, just because your accomplishments and talents aren’t presented the right way.