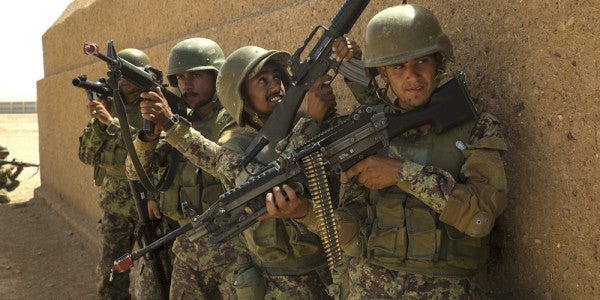 Faryab Governor Naqibullah Fayeq told TOLO News the outposts were abandoned due to low morale among the soldiers, while one Afghan army general said the soldiers “were ordered to leave the bases to receive better training and equipment.”

Meanwhile, an Afghan Defense Ministry spokesman gave this confusing reason to the paper:

“Based on the four-year security plan which will become a six-year plan as we have obtained financial support (for it) at the Brussels (summit) through to 2024, insecurity, relocation of army and other security plans are implemented in accordance with this plan and there is no other issue,” said Ghafoor Ahmad Jawed, a spokesman for the Defense Ministry.

A spokesman for the U.S. Resolute Support mission said the shuttering of the camp was part of a planned retrograde of Afghan forces from one camp to another, which was supported by coalition airstrikes.

“It frees up Afghan security forces for offensive operations, and prevents the enemies of Afghanistan from overrunning these positions.”

The convoy was ambushed by Taliban fighters as they left the area and headed to the Qaisar district center. There were conflicting reports regarding the number of Afghan and Taliban fighters killed.

Fighting in Faryab, Nangarhar, Helmand, Kunar, Kandahar, and Ghazni provinces have accounted for 60 percent of all security incidents this quarter, according to the Special Inspector General for Afghanistan Reconstruction.

This post was updated on Aug. 30 8:15 a.m. PDT with information from a Resolute Support spokesman.