Does Gen. Dunford Actually Believe His Own Bullsh-t?

I often wonder whether four-star generals actually believe their own bullshit. That thought has crossed my mind more than once... 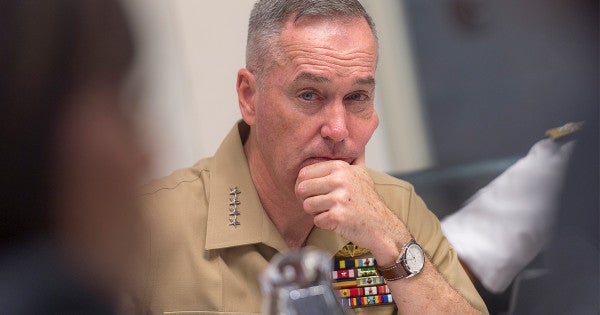 I often wonder whether four-star generals actually believe their own bullshit.

That thought has crossed my mind more than once after reading quotes from Gen. Joseph Dunford, the current chairman of the Joint Chiefs of Staff. You see, old “fightin' Joe” has been in the news quite a bit lately, since he recently took a trip over to Afghanistan to learn firsthand how everything is shaping up.

Predictably, he returned and told us that, yes, there are a few issues here or there still to be worked out, but he's “encouraged by the progress” in Afghanistan, some 17 years after the first American boots were on the ground.

Does Dunford actually buy this sales line of “progress” that has been offered ad nauseam by just about every general in Afghanistan for the past 10 years?

Or how about another DoD news item from a week ago, when Dunford talked up the “fundamentally different” strategy of advising and assisting Afghan security forces that was recently implemented by the Trump administration? He told reporters traveling with him that 2018 was “not another year of the same thing we've been doing.”

Really, Joe? I'd like to fact check you for a moment here if I could.

Back in Feb. 2013, Dunford assumed command of all NATO forces in Afghanistan, where he oversaw the drawdown of U.S. troops for 18 months. He also put his name and signature on a document explaining the coalition strategy of advising and assisting Afghan security forces, which began in late 2011.

The document, which was an unclassified guidebook intended for soldiers headed to Afghanistan called the [Resolute Support] Security Force Assistance Guide, offered highlights on the advisory mission, and explained that soldiers should “adopt a specific mindset of working by, with, and through” the Afghan security forces.

This was from July 2014. It was, in essence, a broad 72-page outline of a strategy where U.S. forces would embed at all levels of Afghanistan's military and government, and offer their advice and mentorship as Afghan forces improved enough so the U.S. could finally leave.

“The years of investment in combat-oriented mentoring and advising has paid off,” the guide said, noting that Afghans began to take the lead starting with the 2013 fighting season.

Now back to the present: The supposedly-new strategy called for assistance to Afghan security forces — just like we've been doing — minus the Obama administration's timetable for withdrawal. Meanwhile, the Army stood up a new unit called the 1st Security Force Assistance Brigade with the express purpose of carrying out this same mission (it plans to slowly roll out up to five more, according to its reenlistment recruiting website).

SFAB's job is to support Afghan security forces — which, again, have been receiving training from the U.S. and other NATO partners for over a decade — who are still widely illiterate, suffer casualty rates “often described as unsustainable,” and continue to be reliant on air support from the U.S., according to a Congressional Research Service report out earlier this month.

The truth is, we're not doing anything “fundamentally different” in Afghanistan, as Dunford and many other generals would like you to believe. I personally conducted joint patrols alongside Afghan security forces all the way back in 2004, as our company commander regularly met with them and government officials to help them fight the Taliban. But maybe those didn't count.

Dunford knows we're doing the same old shit we've always done there — training an inept foreign military backed by a corrupt government that will crumble as soon as we pull up chocks.

But he won't tell you that. And as long as Congress keeps dumping money into a war that will never be won, he'll continue to bullshit us all.