“This is some serious Navy SEAL shit we're about to do,” Rob O'Neill, the former SEAL Team 6 operator who... 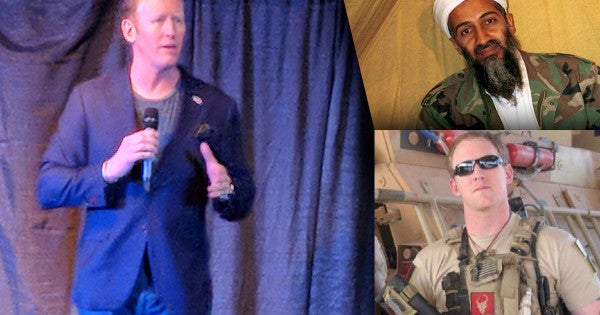 “This is some serious Navy SEAL shit we're about to do,” Rob O'Neill, the former SEAL Team 6 operator who killed Osama bin Laden, said Wednesday of what he was thinking during the 2011 raid in Abbottabad, Pakistan.

While speaking to a mostly military and veteran crowd at a Clever Talks event in San Diego May 16, O'Neill described his perspective before and during the raid — and revealed some interesting anecdotes along the way.

Initially, he said, the team's leaders didn't say much about what they were actually going to do. You need to get this thing from a house, but we can't tell you much more, they said. But some on the team thought they were going to nab Muammar Gaddafi from Libya, since it was right around the time of the Arab Spring.

Then they learned who was going to brief them — the vice president, the defense secretary, and the CIA's Afghan-Pakistan counterterrorism director — and O'Neill speculated it was bin Laden, which he revealed to his commander during a car ride.

At that point, the teammate who was driving looked in the rearview mirror and said, “O'Neill, if we kill Osama bin Laden, I will suck your dick.” Three weeks later, he was bringing up that bet while standing over the al Qaeda leader's body.

O'Neill dropped a couple more zingers along the way, including what the pilot said as they were leaving Pakistani airspace after the raid, where they feared they could potentially be shot out of the sky: “Alright gentlemen, for the first time in your lives, you're going to be happy to hear this. Welcome to Afghanistan.”

The former SEAL also offered his version of what really happened once they got back from the raid, as opposed to how it's portrayed in a scene from Zero Dark Thirty. At the end of that film, “Maya” — the CIA officer who'd tracked Bin Laden for years — breaks down in tears.

But that's not what really happened, O'Neill said.

Instead, he pulled out his now-historic rifle magazine to give to her as a keepsake of the moment. Then they walked over to Bin Laden's body and he asked, “Is that your guy?”

Listen to his full story below: