The Marine Corps has officially launched an investigation into a lance corporal who apparently attacked a protester at the Charlottesville... 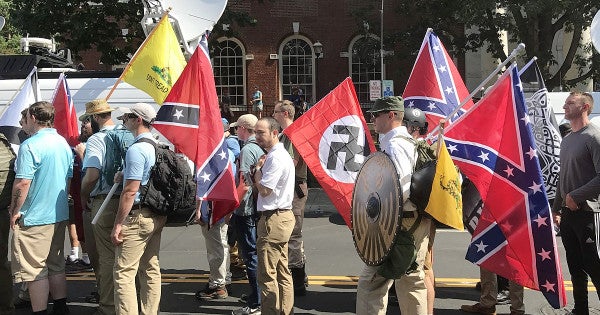 The Marine Corps has officially launched an investigation into a lance corporal who apparently attacked a protester at the Charlottesville “Unite The Right” rally while marching with white supremacist groups.

“The Commandant is aware of the allegations against the Marine and there is an investigation underway,” said Lt. Col. Eric Dent, a spokesman for Gen. Robert Neller.

Lance Cpl. Vasillios Pistolis, 18, was outed as a member of a neo-Nazi group known as Atomwaffen Division in an article published Thursday by ProPublica. According to the site, Pistolis bragged about attacking a woman at the rally in Aug. 2017, where he was photographed in a black track suit carrying a Confederate battle flag.

Multiple calls to leaders in the Marine's unit went unanswered.

1st Lt. Samir Glenn-Roundtree, a spokesman for 2nd MLG, told Task & Purpose an investigation had been initiated by the Marine's unit and the Naval Criminal Investigative Service.

“2nd Marine Logistics Group was made aware of an allegation pertaining to a Marine in an MLG unit potentially involved in a supremacist organization.

This matter is being reviewed by the command, and an investigation has been opened by the Naval Criminal Investigative Service (NCIS) to determine the facts surrounding the allegation.

Participation in extremist activities or organizations is inconsistent with the core values of the Marine Corps. 2nd MLG takes this allegation seriously, and the matter is under investigation.”